The SGBB system evolved as a large, elongate geological complex, from the Late Carboniferous to the Middle Triassic (approximately 310 to 230 million years ago (Ma)). The series of contiguous basins formed along part of the ancient Gondwana continental margin and has a complex, multiphase history including early rifting in a back-arc environment, and thermal subsidence evolving into a retro-arc foreland basin (Bann et al., 2004, p. 181). The prolonged, subsiding basin environment was therefore suitable for coal accumulation. A three-dimensional geological model of the SGBB produced by Danis (2012, p. 26) shows an outline of the basement structure, providing knowledge on the depth to basement, depth to basal volcanics and thickness of the sedimentary rock sequence. 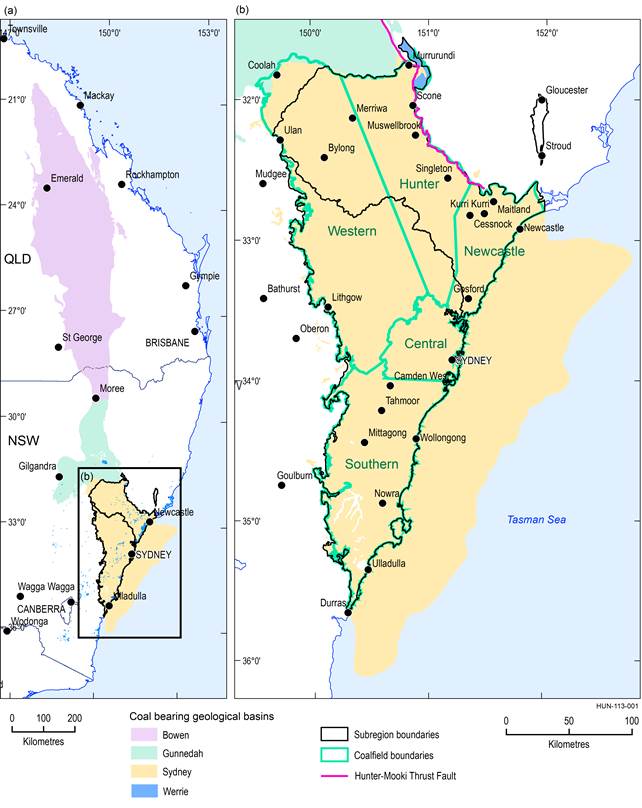 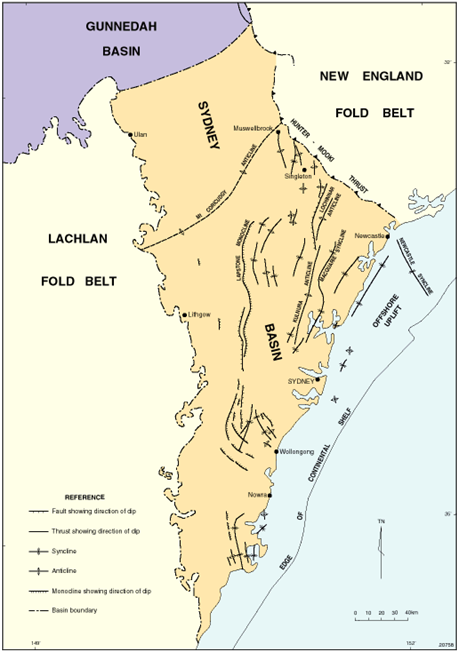 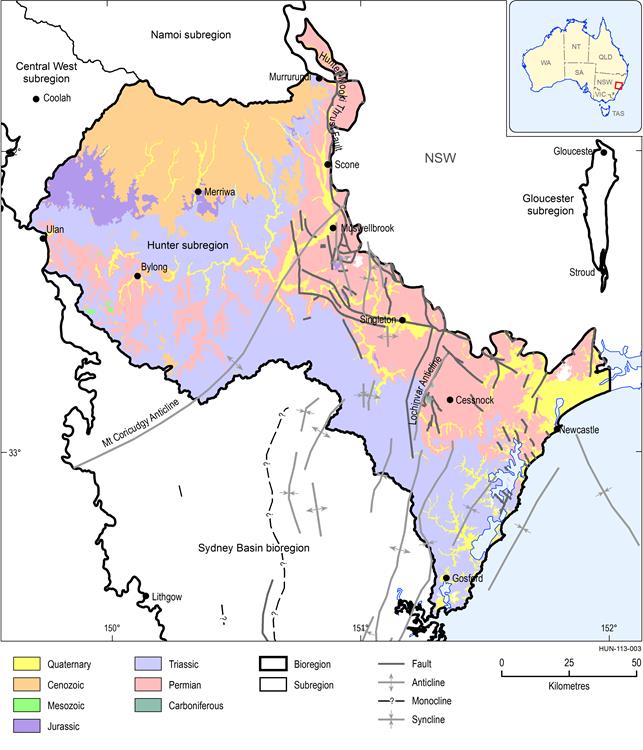 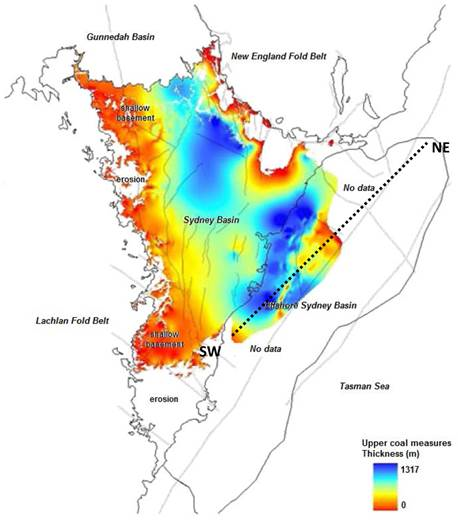 The main structural boundaries of the Sydney Basin include the Hunter-Mooki Thrust Fault System in the north-east, and an erosional or depositional boundary in the west where the Permian-Triassic sedimentary rocks on-lap the Lachlan Fold Belt (Figure 28 and Figure 29). The Mount Coricudgy Anticline is believed to divide the Sydney Basin from the Gunnedah Basin to the north where the basement shallows (Danis et al., 2011, p. 536; Bembrick et al., 1980, p. 2). In the south-east, the Sydney Basin extends to the edge of the continental shelf (Tadros, 1995, p. 163).

The sedimentary pile in the Sydney Basin is asymmetrical. The thickest accumulations are along the east-dipping Hunter-Mooki Thrust Fault System (Figure 29) suggesting that subsidence was greatest along that fault. The sequence thins to the west.

Coal measure sedimentation in the Sydney Basin began in the early Permian and was terminated towards the end of the Permian by major uplift and basin tilting (Scheibner, 1999, p. 27). The earliest Permian units were deposited in fluvial, coastal plain and marine environments on older Paleozoic basement rocks. This deposition was followed by rapid subsidence in the middle Permian, providing more space for sediment accumulation, with the main period of coal deposition occurring in the late Permian (Tadros, 1995, p. 166). The Sydney Basin contains generally flat-lying, Permian-Triassic sequences and ranges from 2 to 4 km in depth (Veevers, 1984; O’Neill and Danis, 2013, p. 19).

Within the Hunter subregion rocks of Triassic age outcrop across most of the surface in the south, whereas rocks of Permian age outcrop along the Hunter-Mooki Thrust Fault in the east, as shown in Figure 30 . In the north Cenozoic-aged basalts cover most of the surface (Figure 30). These intrusions are discussed in the hydrogeology section of the context statement. Figure 31 shows the distribution of the upper coal measures within the basin, which is thickest in the northern and south-eastern regions. The structure, major rock units and coal measure sequences in the basin are shown in the cross-section in Figure 32. 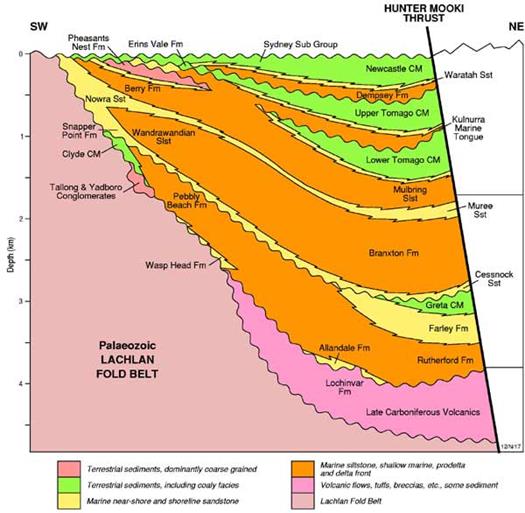 The likely location of section line is shown in Figure 31

The Sydney Basin has five coalfields: the Hunter, Newcastle, Western and Southern coalfields, which are currently mined, and the Central Coalfield which is not mined (Figure 28). Each is based on structural and geographic boundaries. The stratigraphic horizons across the western, southern and central regions can be well correlated, with the bulk of the coal deposits hosted within the Illawarra Coal Measures, as shown in the generalised stratigraphic column in Figure 33 .

Stratigraphic horizons in the north and north-eastern regions can be well correlated, where coal deposits are generally hosted within the three coal measure sequences. Younger sedimentary units of Jurassic and Cenozoic age also occur in the Hunter subregion but are not shown in Figure 33 and are not the focus of this geology section because they do not contain significant economic coal resources. These Jurassic and Cenozoic units may contain groundwater resources, and thus are mentioned in places throughout Section 1.1.4 .

The Werrie Basin is located on the eastern side of the Hunter-Mooki Fault System on New England Fold Belt basement adjacent to the eastern side of the Gunnedah Basin and the north-western side of the Sydney Basin. It is a north–north-west trending synclinal structure in the south-western part of the New England Fold Belt. The Werrie Basin lies within the buffer zone of the Sydney and Gunnedah basins and contains a terrestrial coal-bearing unit that correlates with the Maules Creek Formation in the Gunnedah Basin and the Greta Coal Measures in the Hunter Coalfield of the Sydney Basin. The Hunter-Mooki Fault System terminates the basin at each end (Resources and Conservation Assessment Council, 2002, p. 65). There is currently no official geographic information system (GIS) shapefile available for the Werrie Basin (S Lewis, Geoscience Australia, 2014, pers. comm.). A digitised file of the basin extent has thus been prepared specifically for this assessment. Due to its relatively small size, the Werrie Basin is not currently included in the Australian Geological Provinces Database (Geoscience Australia, 2013). As this feature is so small and ill defined, in some geological circles it is termed the Werrie Syncline. Definition of the Hunter subregion used a spatially disconnected part of the Gunnedah Basin (Geoscience Australia, 2009) with a boundary that closely resembles other more detailed definitions of the Werrie Basin (Carey, 1934; DMR, 2002). 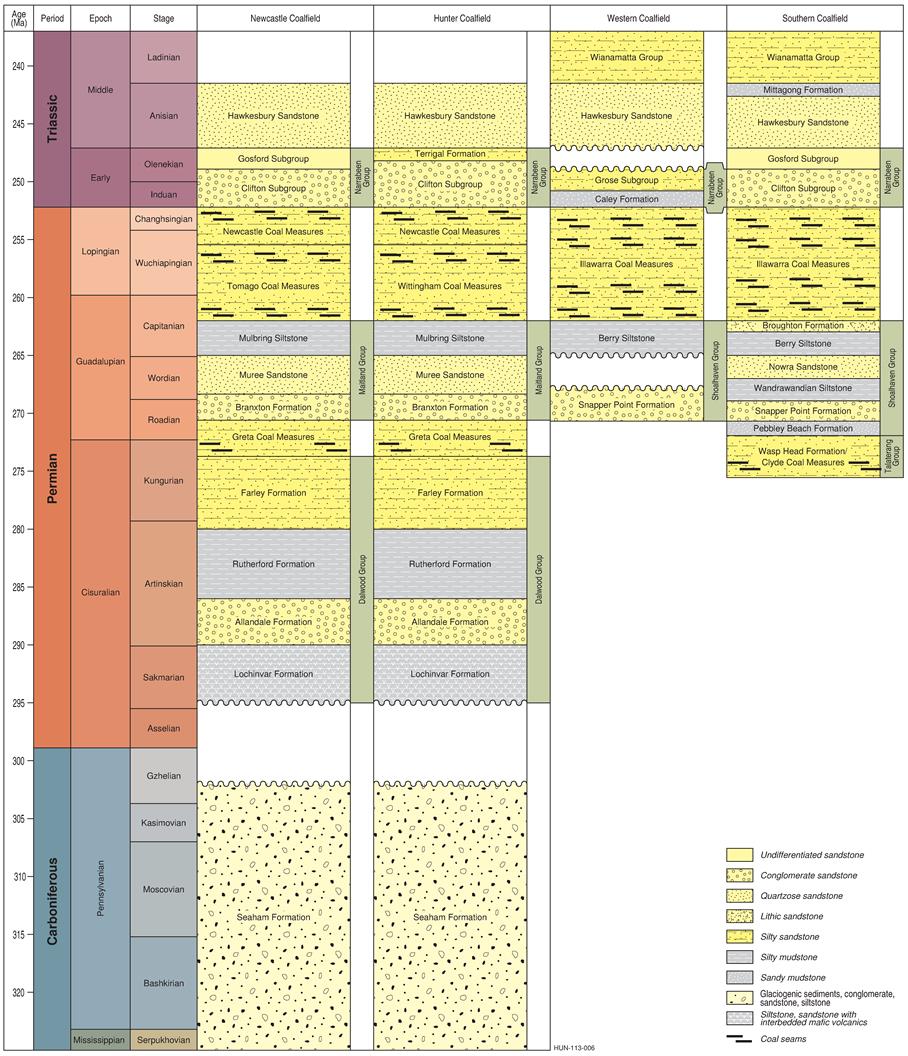