The human population in the Hunter subregion is mainly concentrated in the city of Newcastle, the Central Coast region (covering Gosford and other coastal towns), and the towns of Maitland and Cessnock (Figure 19). Intersecting the 2011 Australian Bureau of Statistics (ABS) Urban Centre and Locality (UCL) data with the Hunter subregion boundary indicates that there were 12 UCLs with populations greater than 5000 people in 2011. In total it is estimated that about 837,844 people live in the subregion. This value is estimated by intersecting the subregion boundary with the 2011 Australian Census mesh blocks boundaries and population counts, so is approximate only. 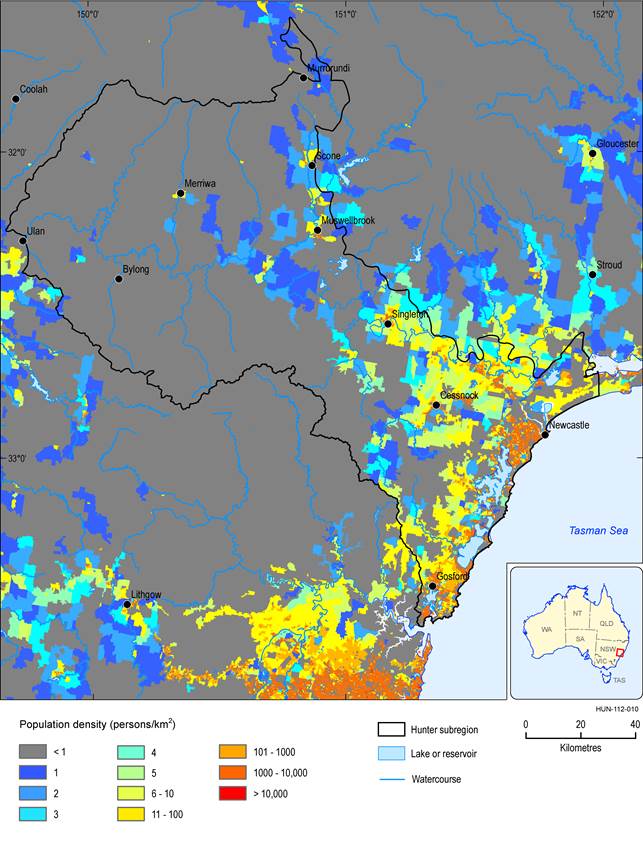 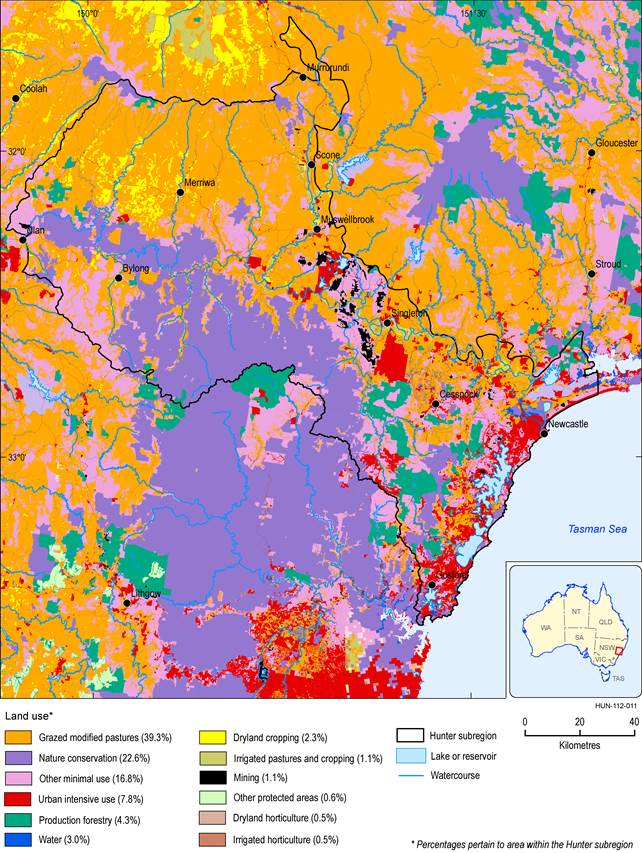 Figure 20 Land use in the Hunter subregion

Figure 21 shows that there are several major dams on rivers in the Hunter subregion, including Glenbawn Dam (on the Hunter River), Liddell Dam (on Antiene Creek, among others), Glennies Creek Dam (on Fal Brook) and Grahamstown Dam (connected to the Williams River via surface canals). There are other dams within the Hunter subregion and numerous farm dams are located throughout the subregion. The Hunter River is regulated downstream from Glenbawn Dam to where it discharges to the Tasman Sea near Newcastle (Figure 21). Additionally, Fal Brook, a tributary of the Hunter River joining upstream of Singleton, is regulated downstream from Glennies Creek Dam (Figure 21).

Water use in the Hunter subregion is primarily for urban centres (both domestic and industry use), agricultural production (i.e. grazing, viticulture and other crop irrigation), and cooling of the Bayswater, Liddell, and Redbank coal-fired power stations (Figure 21) that provide a substantial component of electrical energy requirements in NSW. Other coal-fired power stations, including Eraring, Vales Point and Munmorah, are cooled primarily with salt water and do not require a water licence from NSW Office of Water (Dave Hoey, NSW Office of Water, pers. comm. 27 Oct 2014). Over the past five years the Munmorah power station has been decommissioned in a staged approach. Two of the four turbines were maintained on standby, but not used in production since August 2010, and the power station was disconnected from the grid in May 2014. Water is used in the coal mines that are located in the Hunter subregion, and to address the balance between water availability and salinity of the Hunter River the Hunter River Salinity Trading Scheme (HRSTS) was established in 1995; further details about the HRSTS are provided in the following Section 1.1.5 . In some farms adjacent to the river network, water may be derived from any mixture of local surface runoff, bore water (i.e. groundwater) and extracted river water.

The NSW Government introduced coal seam gas (CSG) exclusion zones in October 2013 for existing residential zones in all local government areas in NSW (NSW Government, 2015). In January 2014, ‘future residential growth areas’, ‘additional rural village land’ (seven villages), and the equine and viticulture critical industry cluster (CIC) areas in the Upper Hunter were added to the CSG exclusion area. The exclusion zones ban new CSG activity inside, and also within a two kilometre buffer around, residential zones, future residential areas and additional rural village land. There is no buffer area around critical industry clusters. Additionally, information was released in January 2014, identifying the areas of ‘biophysical strategic agricultural land’ – land of high quality soil and water resources capable of supporting high levels of agricultural production – across NSW, which it deemed necessary to support the state’s $12 billion/year agricultural industry (NSW Government, 2014). The CSG exclusion zones for the Hunter subregion are shown in Figure 22, covering a total of 31.2% of the subregion. The CSG exclusion areas do not affect the existing arrangements for non-CSG types of mining and petroleum activity. In addition to the exclusion zones, within NSW mining and petroleum production are generally prohibited in land uses such as conservation zones (national park and other reserves) and in some land zoned for environmental protection. The exclusion zones relates to both the land surface and all geological strata below, this means no gas can be extracted using horizontal wells below the exclusion zones. 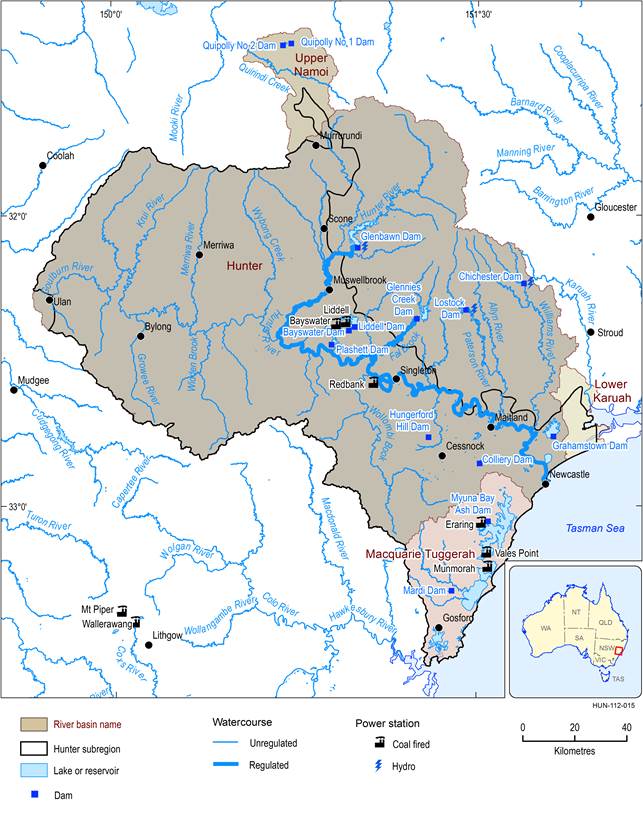 Figure 21 Dams and river regulation in the Hunter subregion 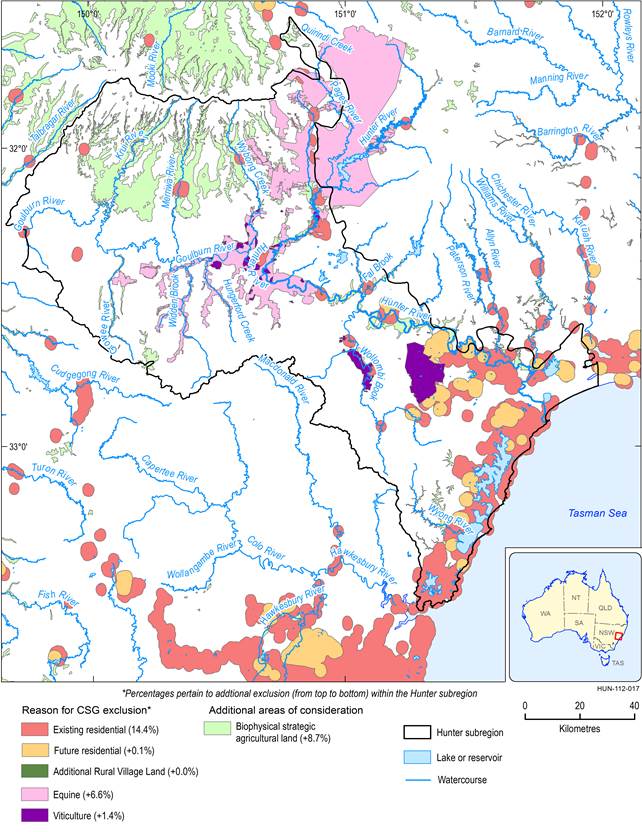 As the coal seam gas (CSG) exclusion zones are overlapping the additional area to those above is indicated by a ‘+’ sign. The biophysical strategic agricultural land is not part of the CSG exclusion zone and is considered in a separate NSW Government process.

In this section, national Australia-wide grids of daily precipitation (P; available from 1900 onwards) generated by the Bureau of Meteorology (Jones et al., 2009) are used; they are 0.05 degree (or ~5 km) grid cell resolution. The Penman formulation is used to calculate daily potential evapotranspiration (PET; a measure of the atmosphere’s ‘drying power’), which is calculated per Donohue et al. (2010a), with meteorological data, other than daily mean wind speed (McVicar et al., 2008), being provided by the Bureau of Meteorology (Jones et al., 2009). The PET data also have 0.05 degree (or ~5 km) grid cell resolution. The daily PET data (1982 onwards, due to use of satellite based albedo (the colour of the land surface, defining how much sunlight is reflected) in the radiation calculations) and daily mean wind speed data (1975 onwards, when the Bureau of Meteorology network of anemometers become suitable for national assessment) are generated, and made freely available, by CSIRO Land and Water.

The climate is sub-tropical in the eastern part of the subregion, bordering on temperate in the western part of the subregion. The long-term (i.e. 1900 to 2012) mean P in the subregion is approximately 779 mm/year (Figure 23). Like much of Australia there is considerable inter-annual variability, with some years receiving high P (e.g. 1950 received 1490 mm/year) and consecutive years of lower than mean P (e.g. 1979 to 1983) that indicate drought conditions (Figure 23). This analysis shows temporal variability of a key hydrological variable: precipitation. Climate also exhibits spatial variability and Figure 24(a) shows the 1982 to 2012 annual mean P varies spatially over the subregion. In the broader vicinity of the subregion this ranges from 600 to 1440 mm/year; the higher P values are associated with higher elevations (Figure 8). In the subregion over the last 30 years (i.e. 1982 to 2012) the annual mean P is 793 mm/year, with the maximum and minimum being 1400 and 598 mm/year, respectively. PET in the broader vicinity of the subregion varies from 1250 to 1950 mm/year, and, as expected, the spatial pattern is complementary to P. Areas receiving high amounts of P are usually cooler and cloudier, so the PET values are lower in these parts of the landscape. Within the subregion the 1982 to 2012 annual mean PET is 1728 mm/year, and with the maximum and minimum being 1908 and 1462 mm/year, respectively.

Figure 23 Temporal characteristics of annual precipitation for the Hunter subregion 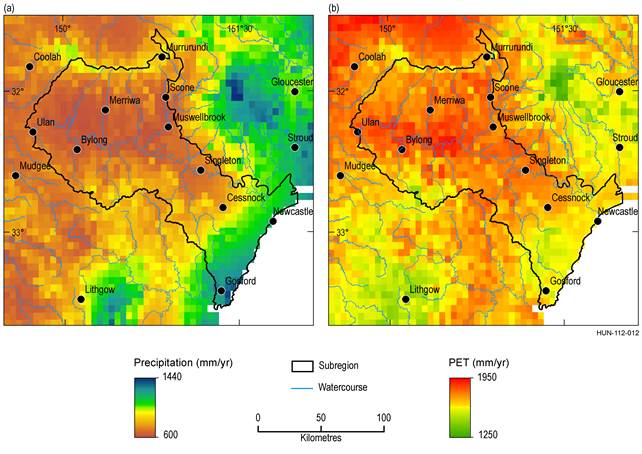 Using subregion-specific averages, within a year there is a slight seasonal cycle in P (Figure 25). On average, the rainy season extends from November to March, with the winter months (i.e. June to August, inclusive) being the relative drier part of the year. When monthly P is compared to monthly PET we see that P has a smaller magnitude to PET with PET being greater than P for most (not all) months. Given soil water storage dynamics, the Hunter subregion can be considered as ‘equitant’ (i.e. straddling the water-limit and energy-limit) throughout the year (McVicar et al., 2012b). This suggests that actual evaporation (AET) in the Hunter subregion is slightly water-limited (defined when the PET/P ratio is greater than 1.0, as opposed to being energy-limited; when PET/P is less than 1.0). Given the high amounts of P (relative for Australian conditions) there will be high levels of AET and associated vegetation growth (see Figure 16 and Figure 17).

Figure 26 shows mean monthly conditions over the past 30 years (i.e. 1982 to 2012), and below this there is temporal variability for P, PET and the climate factors (primarily air temperature, vapour pressure deficit, net radiation and wind speed) that govern PET. As expected, monthly P experiences greater variability when compared to other climate factors (Figure 26). 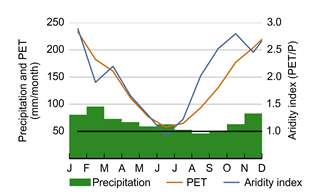 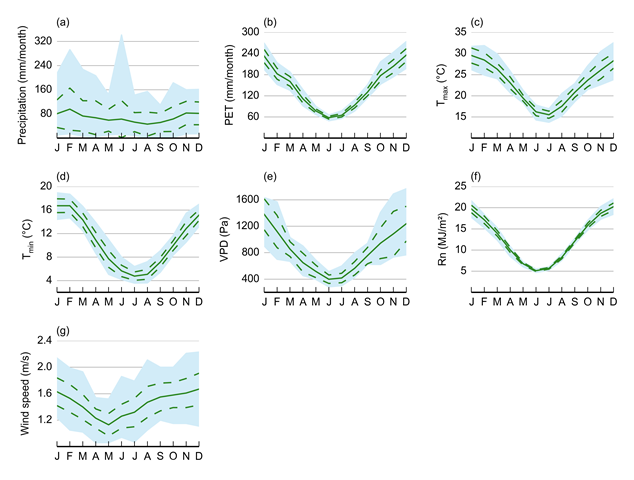 Figure 26 Monthly mean values of precipitation, potential evapotranspiration and other climate factors for the Hunter subregion

Monthly trends of P, PET and all variables driving PET are shown in Figure 27 . The monthly trends for precipitation straddle the no trend (i.e. zero mm/month/year) line, whereas PET, even in the face of warming air temperatures is mainly declining. Declining rates of PET are due to declining amounts of wind speed (in all months) and declining amounts of net radiation and vapour pressure deficit (in most months), which together result in a larger change than the PET increases associated solely with increasing air temperature. Similar findings were reported for other areas of south-east of Australia (Donohue et al., 2010b; Donohue et al., 2011; McVicar et al., 2012a). 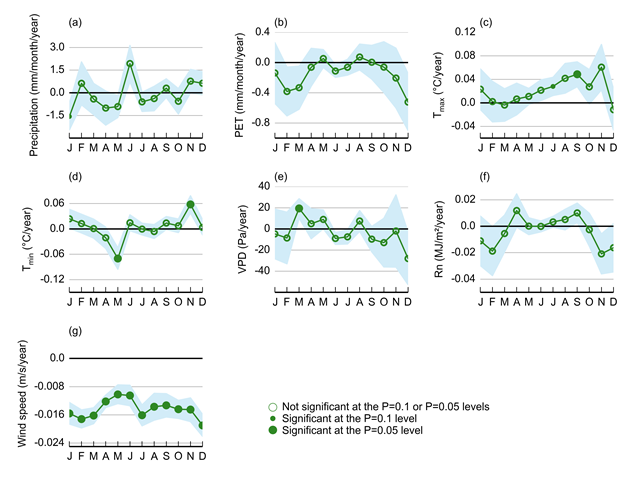 Figure 27 Annual trends by month of precipitation, potential evapotranspiration and other climate factors for the Hunter subregion

While future climate projections produced by global climate models (GCMs) are not in agreement (Lim and Roderick, 2009; Sun et al., 2011), one approach is to use their outputs and assess what future projections of rainfall and runoff will be. Using 15 GCMs from the Fourth Assessment Report of the Intergovernmental Panel on Climate Change (IPCC, 2007, hereafter referred to as IPCC AR4) Post et al. (2012) used the IPCC A1B global warming scenario output to transform historical daily climate records to provide future daily climate projections of P and PET that can be used in a rainfall-runoff model. Compared to the global mean temperature in 1990, the IPCC A1B scenario indicates a global temperature that is 1 °C higher in 2030 and 2 °C higher in 2070. This scenario is based upon: (i) very rapid economic growth, (ii) with global populations peaking mid-century and declining thereafter, and (iii) the rapid introduction of new and more efficient technologies with a balance across all energy sources (IPCC, 2007). Full details of the transformation of historical daily climate records using IPCC AR4 output are reported in Chiew et al. (2009) and Li et al. (2009).

Post et al. (2012) assessed the changes in P for the 15 GCMs and reported changes for large catchments such as the Hunter River and Macquarie-Tuggerah Lakes catchments, which comprise much of the Hunter subregion (see Figure 10). Table 8 shows that for both catchments just over half of the GCMs selected suggest there will be some decline in P. Taking into account the range of projections that may occur for a 1 °C rise in temperatures (associated with 2030) there is approximately a –9%, –2% and 4% change in P projected for the dry extreme, median and wet extreme, respectively. For a 2 °C rise in temperatures (associated with 2070), these values are approximately –17%, –4% and 7%, respectively (Table 8).

To model future runoff (Q), Post et al. (2012) used the future projections of daily P, along with a form of PET (specifically Morton’s wet environment areal formulation) as input to a lumped conceptual rainfall-runoff model called SIMHYD which utilises the Muskingum routing method (Chiew et al., 2009). Table 9 shows that the Post et al. (2012) modelling results suggest for a 1 °C rise in temperatures (associated with 2030) there is approximately a –22%, –6% and 7% change in Q projected for the dry extreme, median and wet extreme, respectively. For a 2 °C rise in temperatures (associated with 2070), these values are approximately –40%, –10% and 14%, respectively (Table 9). As noted previously the Hunter basin is ‘equitant’ and so estimates of both P and PET are important for future projections of Q (McVicar et al., 2012b). Given this, use of Morton’s wet environment areal formulation of PET, which does not include wind speed in its formulation, means that the impact of declining rates of observed wind speed which are offsetting increasing air temperature enhancement of PET (Donohue et al., 2010a; McVicar et al., 2012a; McVicar et al., 2012b) are not included in the resultant Q calculations. Hence the values presented in Table 9 are approximate projections only, as key process understanding is not encapsulated in the modelling.