This section presents information about coal seam gas (CSG) in the geological Sydney Basin (referred to throughout this section as the Sydney Basin), the Permian coal measures and the Southern and Western coalfields. The NSW Government has introduced CSG exclusion zones around existing and future residential areas within the bioregion (see Figure 17 in companion product 1.1 for the Sydney Basin bioregion (Herron et al., 2018)), which prohibit CSG development within a 2 km radius of these residential areas. Thus, many areas of identified coal resources cannot be developed.

Thomson et al. (2014) undertook a study on the distribution of CSG within the northern Sydney Basin (Hunter subregion) and defined four zones. These zones are based on the dominant gas content (Thomson et al., 2014). Similar investigations have not been carried out for the southern portion of the basin (Figure 3).

Many reports on CSG distribution and characteristics are available in the DIGS (Digital Imaging of Geological Systems) website (NSW Trade and Investment, 2015b). 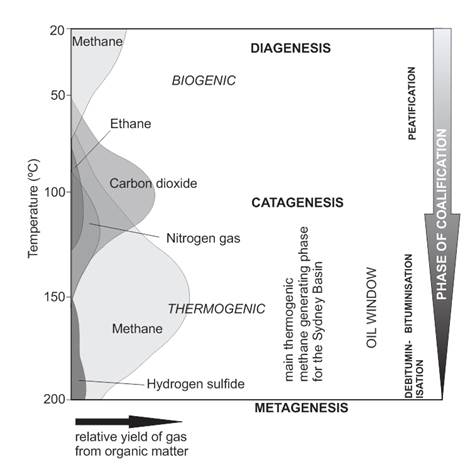 Coal seam gas is generally extracted down to about 1 km.

Source: after Thomson et al. (2014). Observations on the distribution of coal seam gas in the Sydney Basin and the development of a predictive model. Thomson S, Thomson D and Flood P. Australian Journal of Earth Sciences. Copyright © Geological Society of Australia, reprinted by permission of Taylor & Francis Ltd, www.tandfonline.com on behalf of Geological Society of Australia.

The production of CSG from the Illawarra Coal Measures is currently taking place in the Camden-Campbelltown region as part of the AGL Energy Limited (AGL) operated Camden Gas Project in the Southern Coalfield (Sydney Catchment Authority, 2012, p. 3; O’Neill and Danis, 2013, p. 23). This is the Sydney Basin’s only CSG production site (Sydney Catchment Authority, 2012, p. 8). The Camden Gas Project is located 64 km south-west of Sydney (Mine Subsidence Engineering Consultants, 2007, p. 5). Gas has been produced from the Camden Gas Project since 2001 (Ward and Kelly, 2013). There are currently 95 gas production wells in operation and several non-producing and sealed wells (AGL Energy Ltd, 2015). However, there have been some further CSG exploration activities within the basin (Sydney Catchment Authority, 2012, p. 4).

The Southern Coalfield is considered to have a high potential for CSG resources with the main phase of thermal gas generation having been reached (Scott and Hamilton, 2006; Ward and Kelly, 2013). Scott and Hamilton (2006) conducted an in-depth analysis of suitable CSG locations across the Sydney and Gunnedah basins. Of the suitable sites presented in the analysis, only two sites fall within the Sydney Basin bioregion. These are a north-south trending belt on the western side of the Cumberland Plain (along the Nepean River and Hawkesbury River valleys) and an area of the Illawarra escarpment which includes a number of Sydney’s water supply catchments and storages. The late Permian coal has a maximum net thickness of 10 m at the first of these sites and 25 m at the other, and the coal has reached the thermogenic gas generation window, with the possibility for biogenic maturation (Scott and Hamilton, 2006). Both sites have a high gas content, though carbon dioxide is present and permeability of the host rocks can be variable (Scott and Hamilton, 2006; Ward and Kelly, 2013). In the Southern Coalfield underground mining operations use underground CSG extraction techniques to reduce the risks associated with mining the gaseous coals (Hanes et al., 2009). Much of the extracted gas is used for power production at the Appin and the former Tower mine sites (Ward and Kelly, 2013, p. 40).

Nevertheless, there may be potential for some CSG extraction in the Bylong Coal Project within the northern portion of the Western Coalfield (within the Hunter subregion) in coal intervals that are not mined for coal (Hansen Bailey, 2015, p. 31), although this is generally limited. Gas can be extracted in areas that have not been affected by igneous intrusions and where the gas contents range from 0.56 to 2.34 m3/t (Hansen Bailey, 2015, p. 31). This level of gas content is considered unusually high for the Western Coalfield; investigations by Thomson et al. (2014) found that the gas contents of the region were generally low at around 0.7 m3/t at a depth of 60 m. The gas is also mainly composed of carbon dioxide (Thomson et al., 2014). There are currently no producing CSG wells (NSW Trade and Investment, 2015a) and minimal CSG exploration in the Western Coalfield.

Summary and download
1.2 Resource assessment for the Sydney Basin bioregion