As of February 2016, there is only one commercially producing coal seam gas (CSG) operation in the Sydney Basin bioregion (Figure 8), the Camden Gas Project. This operation consists of five CSG-related tenements (petroleum production licences, PPL). There are currently no petroleum exploration leases (PEL) in the subregion. 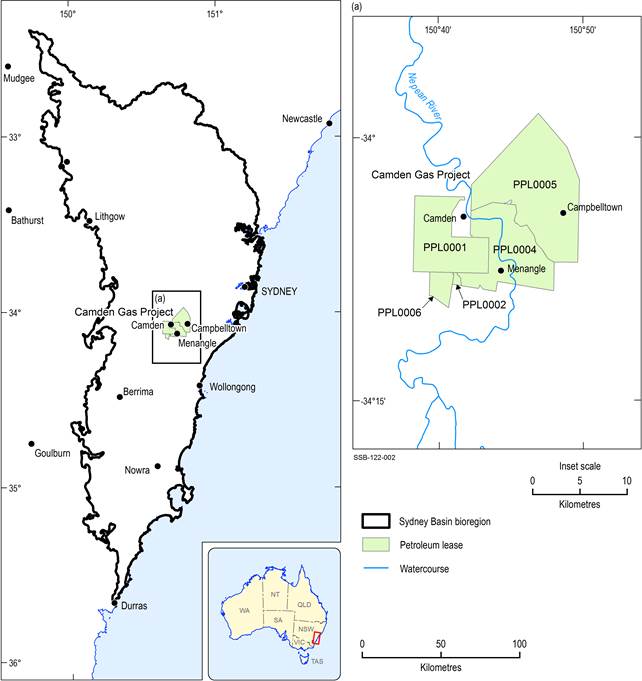 Note that all tenements are owned by AGL Energy Limited.

Camden Gas Project (CGP) is owned and operated by AGL Energy Ltd (AGL). As at December 2015, it has 144 gas wells, 95 of which are currently producing gas and the remainder having been suspended or plugged and abandoned. Of the 144 wells, 117 have been hydraulically fractured. About 70 of those wells used water and sand and the remaining fractured wells used a mixture of sand, water and additives (AGL, 2013a). The project also consists of 100 km of low pressure underground gas gathering lines and the Rosalind Park Gas Plant in the Menangle area (AGL, 2015a). CGP is approximately 65 km south-west of Sydney, and has been producing natural CSG since 2001 (AGL, 2015a).

The project was initiated in 2001 by Sydney Gas Ltd when 14 Elizabeth MacArthur Agricultural Institute wells and 10 Razorback wells were approved throughout the period from 2001 to 2006. The wells were drilled in 2007 and were acquired by AGL in 2009 from Sydney Gas Limited, making AGL 100% owner operator of CGP (AGL, 2015a). Since then, there have been many modifications to the original project proposal, including more production wells. The most recent application was the Camden North Expansion Project that would have involved 12 well locations each containing up to six well heads. However, in July 2015, AGL announced that they would not proceed with this proposal (AGL, 2015a). In February 2016, AGL announced that it had taken the decision to not proceed with the Gloucester Gas Project (in the Gloucester subregion) and will cease production at the Camden Gas Project in 2023, twelve years earlier than previously proposed.

The Rosalind Park Gas Plant (RPGP) is at Menangle, approximately 6 km south-east of Campbelltown. It collects gas from the network of operational production wells in the CGP, and then dries and compresses the gas and distributes it to the Sydney gas consumer network (AECOM, 2014, p.1). The RPGP also filters particles from the gas, meters the quality and quantity of gas, and injects odour to the gas for leak detection (AECOM, 2014, p. 3). Water collected by the plant is cleaned and processed, then released into a pond where it is evaporated or used off site for a variety of approved purposes, such as making bricks (AECOM, 2014, p. 4; AGL, 2013c, p. 4).

Summary and download
1.2 Resource assessment for the Sydney Basin bioregion