Jeebropilly Mine is currently the only operational coal mine within the Clarence‑Moreton bioregion. It is west of Ipswich in south-east Queensland, and coal is mined from the Walloon Coal Measures coal seams in open-cut operations. The mine is owned by New Hope Group, and it temporarily ceased operations in February 2007 after 25 years of continuous operation. During that time, the coal-washing plant at Jeebropilly continued to process coal from the nearby New Oakleigh Mine. The mine was recommissioned in 2008 due to rising export prices for coal. Exploration activity at the Jeebropilly Mine has focused on defining the remaining coal resource within existing mining leases and expanding the geological database to include coal washability testing. According to current plans, production at the Jeebropilly Mine will continue until 2017, followed by rehabilitation and closure (Gomez Gane (New Hope Group), 2014, pers. comm.). 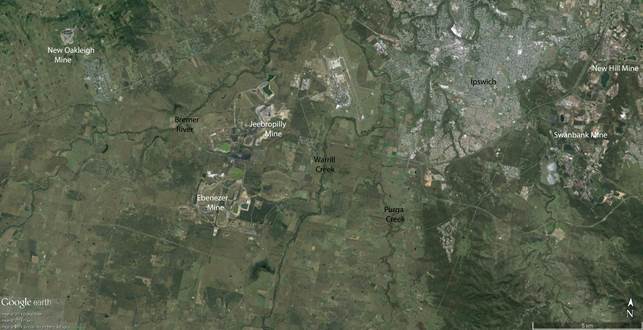