Goscombe and Coxhead (1995) provided an overview of the geology of the Clarence‑Moreton Basin, including information about the coal resources, their quality and utilisation potential for coals from various deposits in the Walloon Coal Measures and equivalents in other basins. The Australian Energy Resource Assessment (Geoscience Australia and BREE, 2014) estimated that there are 2177 Mt of Economically Demonstrated Resources (EDR) of thermal black coal and 15 Mt of Subeconomic Demonstrated Resources (SDR) of thermal coal in the Clarence‑Moreton Basin (EDR, 2014).

The primary coal exploration targets within the Clarence‑Moreton bioregion are the Jurassic Walloon Coal Measures, the Late Triassic Ipswich Coal Measures in south-east Queensland, and the Triassic Nymboida, Red Cliff and Evans Head coal measures in NSW. In addition, coal is also contained within the Koukandowie Formation, the Gatton Sandstone and the Raceview Formation (a member of the Woogaroo Subgroup). However, the coal within these units has not been mined economically in the past (Ingram and Robinson, 1996). 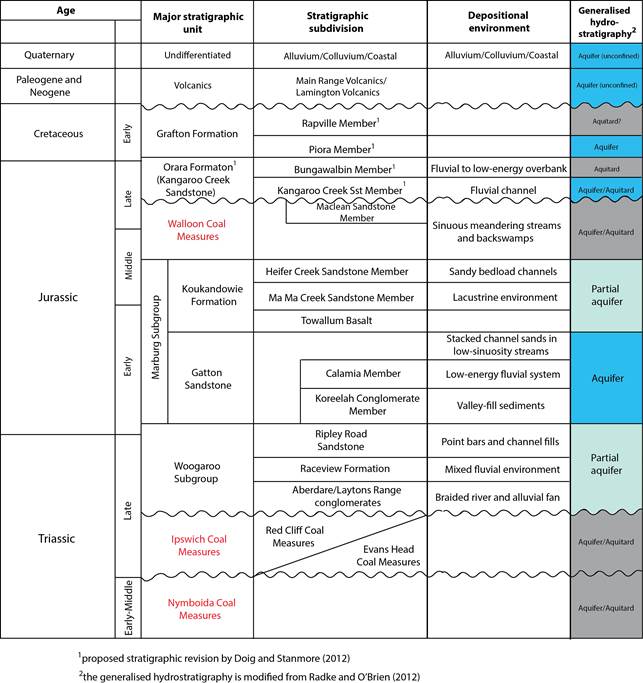 Reviews of coal geology and coal resources in the Clarence‑Moreton Basin in Queensland were published by the Department of Minerals and Energy (Cameron, 1970; Matheson, 1993). These summaries provide historical information on early developments, suggesting that coal in the Rosewood–Walloon Coalfield was first detected in 1864 to 1865 at Walloon and Rosewood west of Ipswich, whereas coal from the Ipswich Coal Measures was first discovered in 1824.

At present, one coal mine operates within the Clarence‑Moreton bioregion (Jeebropilly Mine in south-east Queensland; Figure 4). Another mine, New Oakleigh Mine, ceased operations in January 2013. The coal of the Clarence‑Moreton and Ipswich basins is used for domestic electricity generation and industrial use in Brisbane and for export (Geoscience Australia and BREE, 2014). Mining of the Nymboida Coal Measures has been restricted to small areas near Nymboida in the south-western part of the Clarence‑Moreton Basin in NSW where the Nymboida Coal Measures outcrop (Ingram and Robinson, 1996). No economic coal mining has occurred from the Red Cliff and Evans Head coal measures (Wells, 1995). 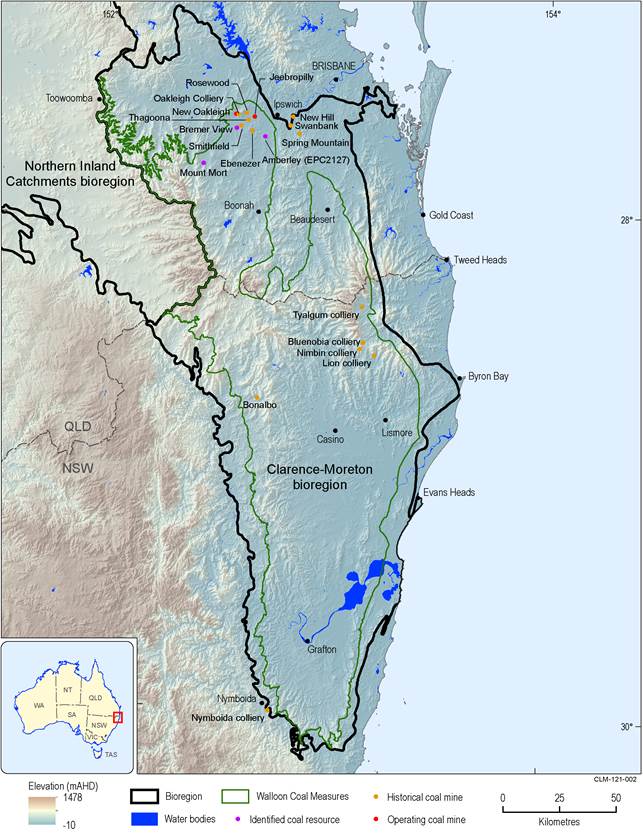 The New Oakleigh Mine was closed in 2013