The conceptual model of causal pathways (as described in companion submethodology M05 (as listed in Table 1) for developing a conceptual model of causal pathways (Henderson et al., 2016)), and the hazard analysis that underpins them, describe the logical chain of events ‒ either planned or unplanned ‒ that link coal resource development and potential impacts on water and water-dependent assets. These causal pathways provide the logical and transparent foundation for the impact and risk analysis. They have been identified through a systematic and exhaustive process, and while there is subsequent prioritisation of those pathways according to the likelihood, severity and detectability of potential impacts, there is a need to ensure that all causal pathways are addressed for the impact and risk analysis to meet the necessary quality criteria. This does not mean that all causal pathways need to be assessed in the same way, only that they are all addressed in some way. Many causal pathways are represented directly in the quantitative numerical groundwater and surface water modelling, while others cannot be modelled for scale or complexity reasons and are addressed qualitatively through a narrative using the current conceptual understanding and knowledge base. There are causal pathways that are more local and addressed adequately by existing site-based management, and others that must be considered knowledge gaps (e.g. because the means of disposal for co-produced water is unknown) and some that are on balance considered implausible.

A systematic hazard analysis, using the Impact Modes and Effects Analysis method (described in companion submethodology M11 (as listed in Table 1) for hazard analysis (Ford et al., 2016)), identified the activities that occur as part of coal resource development in the Namoi subregion and that might result in a change in the quality or quantity of surface water or groundwater. The many individual ‘hazards’ themselves are not represented in the hydrological models, instead they are grouped into four causal pathway groups that reflect the main hydrological pathways via which the effects of a hazard propagate away from its origin and which are broadly represented in the BA hydrological models. They are: 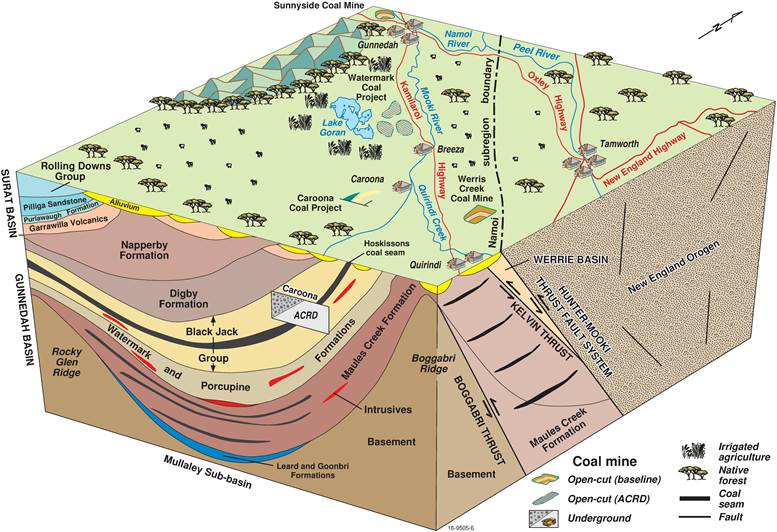 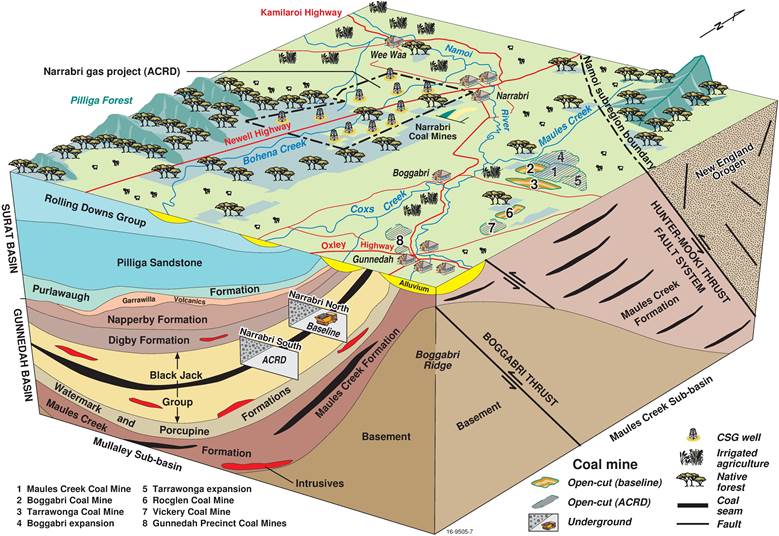 Groundwater modelling simulates the change in groundwater fluxes and stores associated with the coal resource development pathway (CRDP) within the model boundaries. The surface water modelling provides probabilistic estimates for a range of hydrological response variables, including changes in flow and volume, in the major streams of the Namoi subregion due to the coal resource development.

The variables estimated by the hydrological modelling form the basis for assessing the changes to landscape classes, and the classification of different types of ecosystems within BAs. Variables that characterise the hydrological dependence of landscape classes within the zone of potential hydrological change were identified and refined through two expert workshops held in August 2016 and December 2016 (see companion product 2.7 (Ickowicz et al., 2018)). These variables were subsequently mapped to hydrological response variables that were able to be modelled. For example, where the ecological experts identified overbank flow as important to a landscape class, this was modelled by considering the number of events that exceed the flow corresponding to a return period of 3 years for the reference period 1983 to 2012.

Some hazards and potential hydrological changes were not modelled. For example, changes in water quality due to coal resource development activities are out of scope of BAs, except the potential effects on stream salinity. Changes in stream salinity were not modelled, but are considered qualitatively in Section 3.3.4. Some identified hazards are relevant to the local conditions, and site-based management addresses these.