Workshop discussions on the ‘Springs’ landscape group in the Namoi subregion identified a general lack of knowledge about the actual locations of springs in the basin, however, it was concluded that, with respect to the potential impacts of coal resource development, the focus of modelling should address those springs thought to be in the zone of potential hydrological change. These springs were identified as most likely to be recharge springs (Fensham and Fairfax, 2003) (Figure 34). The experts in the workshop defined the flow path of these springs as originating from water that is absorbed into sandstone that outcrops on the margins of the GAB and later discharges locally after relatively short residence times.

The amount of open-water habitat in a spring, and its depth, can be controlled by the structural influence of dams, excavations, and mud mounds (Fensham et al., 2012). The intensity of cattle grazing and populations of pigs, however, can dramatically diminish the depth of the open-water habitat by trampling and eroding its edges (Figure 36).

For recharge springs, the relative depth of a spring is determined by the level of the watertable (Figure 36). When the depth of the watertable falls below the bottom of the spring, subsurface habitats are vulnerable to drying, which can diminish the groundwater biota and invertebrate egg bank (Lamontagne, 2002). This invertebrate egg bank, which exists in the bottom and near-surface sediments of the spring, is an important source of propagules that allow the spring’s invertebrate community to recover after drying spells (Ponder, 1986) (Figure 36).

The amount of precipitation and infiltration was inferred to contribute to groundwater. Coal resource development, through coal seam gas extraction and open-cut mines, could potentially lower the watertable, and thus impact the depth of recharge–rejection springs (Figure 36). 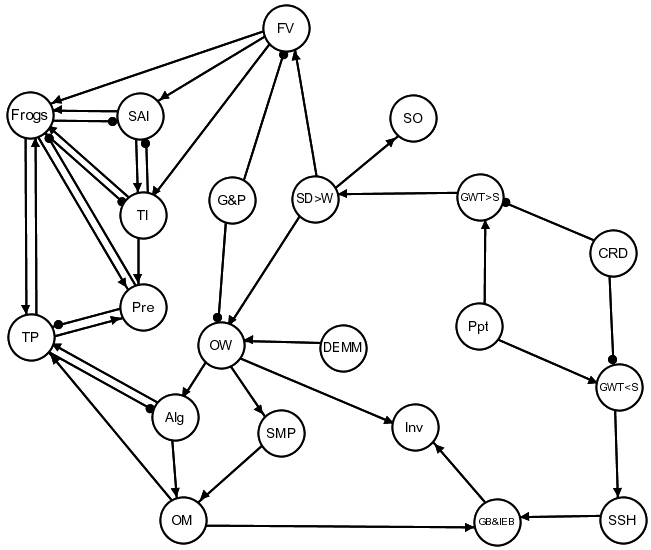 Surface water and groundwater modelling predict significant potential impacts to the level of the watertable. This impact was split into changes in depth of groundwater that was above (GWT>S) and below (GWT<S) the base of the springs, which was developed into two cumulative impact scenarios (Table 47).

Qualitative analyses of the signed digraph model (Figure 36) generally indicate an ambiguous or negative response prediction for all biological variables within the recharge–rejection spring as a result of a drop in the level of the watertable (Table 48).