A qualitative model was developed to describe the ecological community associated with the ‘Rainforest’ landscape group (Figure 33). The model focused on the functional aspects of tree, shrub (tall and short) and vine vegetation, their ecological roles, and their dependency on soil moisture and groundwater (Figure 33). Tall shrubs are an important source of shade, which under optimal conditions, benefits shorter shrubs and contributes to a humid microclimate close to the ground (Figure 33). Shrubs also produce fruits that sustain populations of fruit-eating birds, mammals and arboreal invertebrates. Shrubs and vines provide habitat structure important for arboreal invertebrates and their leaf litter maintains surface soil moisture and is a food resource for soil-dwelling invertebrates (Figure 33). Both groups of invertebrates are a key food resource for frogs, birds, mammals and reptiles. These insectivores are in turn preyed upon by snakes, other reptiles, birds and mammals, which in turn are also being consumed by predatory birds and goannas (Figure 33).

A significant threat described in this system are populations of feral pigs, which consume the fruits of shrubs and plough through the upper soil layers in search of roots as well as frogs, reptiles and insects (OEH, 2010). They are a major source of disturbance to the system that destroys the humid microclimate of the forest floor. Fragmentation from land clearing similarly compromises the humid microclimate, and decreases the amount of shade and habitat structure (OEH, 2010) (Figure 33).

Trees and tall shrubs access and use deep soil moisture while shrubs and vines use shallow soil moisture (Figure 33). Where available, perched groundwater tables are accessed by all types of forest vegetation in the model. There was speculation regarding the role of trees in lifting water from depth and releasing it into surface soil (Burgess et al., 1998); but specific attributes of this process were considered to be relatively uncertain (Figure 33). The principal impact of coal mining was described as a possible lowering of the groundwater table from open-cut mining, which could then limit replenishment of deep soil moisture or even make it too deep to be accessed by tree roots. This effect, however, was deemed as being uncommon or slight for this landscape class over most of the area of interest in the Namoi subregion. Rainforests in this part of the Namoi subregion may access perched groundwater but were considered unlikely to be dependent on deeper groundwater (Curran et al., 2010). However, fauna from adjacent lowlands may use rainforests as a seasonal refuge and this may increase if the lowland watertable is drawn down (Figure 33). 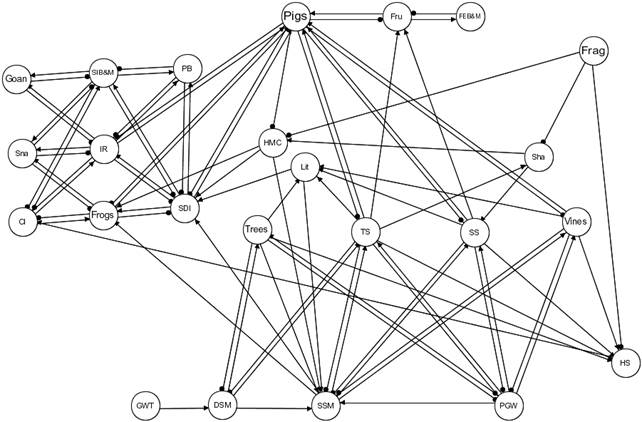 Surface water and groundwater modelling predict significant potential impacts to the watertable, from which a single cumulative impact scenario (C1) was developed (Table 44).

Pressure scenario is determined by a decrease (–) in the following signed digraph variables: groundwater table (GWT).

Qualitative analysis of the signed digraph model (Figure 33) generally indicates a negative response prediction for most biological variables within the rainforest ecosystem as a result of decreasing the groundwater level (Table 45). A predicted decrease in pigs leads to reduced predation of insectivorous reptiles, a predicted increase of which also favours goannas.