One of the key ways in which coal mines affect water resources is the direct impact of the mine footprint areas on detaining surface runoff and preventing its entry to the natural stream network. It is important, therefore, to know how much land surface area is intercepting natural surface runoff. This area is termed the footprint of the mine. For the purposes of bioregional assessments, the footprint includes the entire area disturbed by mine operations, pits, road, spoil dumps, water storages and infrastructure. It may also include otherwise undisturbed parts of the landscape from which natural runoff is retained in reservoirs. The footprint does not include rehabilitated areas whose surface drainage is allowed to enter the natural drainage network. Nor does it include catchment areas upstream of drainage channels that divert water around a mine site but do not retain it.

Coal seam gas developments are assumed to have negligible impact on surface drainage, hence surface water impacts of the Gloucester Gas Project stage 1 are not modelled. The water management plans for this development included using co-produced water for nearby irrigation, using existing storages to store water (see Section 2.6. 1.4). As the storages pre-date the mining development, they were also not modelled as part of the ACRD.

Mine footprint areas are obtained from two sources: digitisation of remotely sensed images of historical mine disturbance, and digitisation of projected mine water management plans in environmental impact statements and similar documents.

The temporal evolution of footprint areas for the three mines in the Gloucester subregion is shown in Figure 7. Each panel shows footprints for both the baseline and the CRDP.

The Duralie Coal Mine commenced operations in 2003 and under the baseline its footprint area increases to a maximum of 3.33 km2 by 2012. The baseline footprint remains at this level after 2012. In the CRDP, the footprint area continues to increase beyond 2013, reaching a peak of 4.09 km2 by 2018. A large proportion of both the baseline and CRDP footprints is comprised of the catchments of several water management dams which are to be retained indefinitely beyond the mine’s productive lifetime. For this reason, the assumed mine footprints remain high for the remainder of the modelling period.

The proposed open-cut at the Rocky Hill Coal Project was not in production before the end of 2012. As a consequence, it does not have a baseline footprint. At the time the Gloucester subregion CRDP was finalised Rocky Hill was assumed to begin operations in 2015 and that starting time has been adopted here. The proposed mine’s footprint reaches a peak of 1.69 km2 by 2019 before decreasing under rehabilitation to an ongoing base level of 0.10 km2 by 2038. 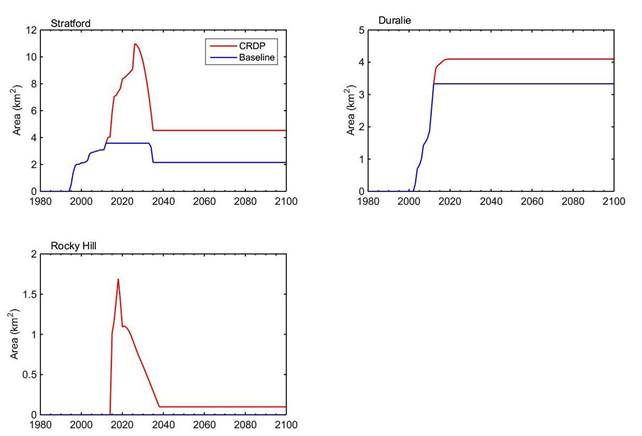 The location, contribution area and maximum additional coal resource development (ACRD) footprint percentage for each receptor is summarised in Table 4 (refer to Figure 5 for location of the receptors – also known as ‘nodes’ – within the subregion). The receptors with the largest upstream mine footprint are those located at and below node 6 in the Avon River, for which the maximum CRDP footprint is 11.7 km2. In the southern part of the subregion, the maximum CRDP footprint is 4.3 km2, which occurs at and below node 21. The node with the largest proportion of its contributing area taken up by ACRD footprint is node 14 on Dog Trap Creek, where 18.4% of the catchment is disturbed by the ACRD.