Much of the Galilee subregion lies in the Cooper Creek – Bulloo and Diamantina river basins (Figure 18). However, most of the proposed coal mine developments are located in the Burdekin river basin. The most advanced coal mine developments are situated on the western side of the Belyando river basin. Proposed CSG projects occur in the Cooper Creek – Bulloo river basin. However, these projects are at a less advanced stage (see Section 2.3.4 and companion submethodology M04 (as listed in Table 1) for developing a coal resource development pathway (Lewis et al., 2014)). As of December 2016, there are no commercially producing coal resource developments in the Galilee subregion.

Streamflow in the Cooper Creek – Bulloo and Diamantina river basins are strongly seasonal and, from year to year, flows can vary greatly from almost no flow to significant floods. Streamflow in the portions of the Burdekin, Fitzroy and Flinders-Norman river basins that lie within the Galilee subregion are characterised as dry seasonal flows. Although flows vary greatly between months with minimal to no flow from July to October, most flows occur between December and April. The flow regime for Warrego river basin, while highly variable, is classed as perennial (companion product 1.1 for the Galilee subregion (Evans et al., 2014)). Much of the river flow in the Warrego river basin occurs between December and April.

There are some closed drainage basins that are associated with significant lakes such as Lake Galilee and Lake Buchanan and they occur between the Great Dividing Range, and the ranges that demarcate the eastern edge of the Eromanga Basin (Figure 18). These lake basins are largely confined on their western side by series of hills that define a long arcuate ridge that runs parallel to the Great Dividing Range. These hills mostly comprise outcropping Eromanga Basin rocks, in particular, the Hutton Sandstone and Ronlow beds. 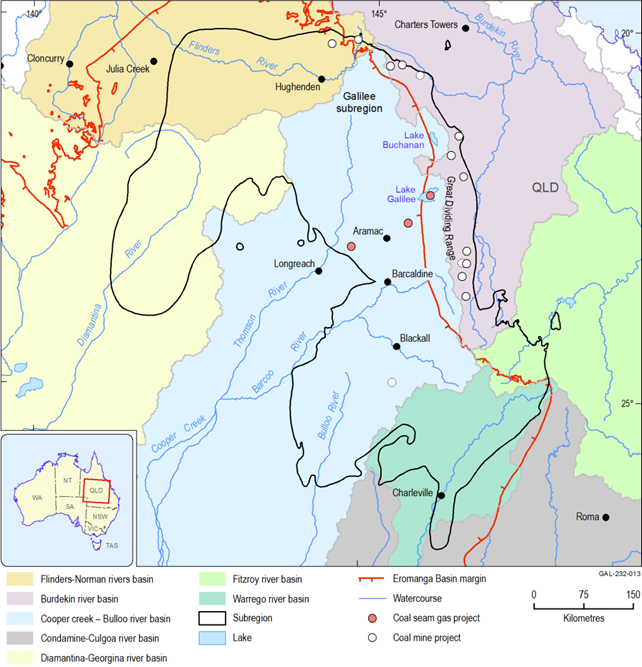