Water management for any future CSG production in the Cooper subregion will depend upon the results of current production testing. Indicative water management options are discussed by JBS&G Australia Pty Ltd and Strike Energy Limited (2014), and summarised in this section.

The CSG project in the CRDP is located within the Far North Prescribed Wells Area (FNPWA). Groundwater in the FNPWA is managed under a water allocation plan (the Far North Water Allocation Plan, FNWAP). General water management planning and obligations for the FNWAP are outlined in companion product 1.5 for the Cooper subregion (Karim et al., 2015). Under the FNWAP, 60 ML/day is allocated for water use as a by-product of petroleum production to the Minister for Mineral Resources and Energy. Extraction of groundwater within the FNPWA is generally licensed; drilling new water bores requires a permit and converting petroleum wells to water wells requires approval from the Department of Environment, Water and Natural Resources. An authorisation exists that allows for groundwater to be taken for use in drilling, construction and testing of petroleum (and other hydrocarbon) wells.

In addition, drawdown in excess of 10% of the pressure head at a state border is a trigger for consultation with the potentially affected state. The pressure head of the Cadna-owie Aquifer at the SA–Queensland–NSW border is approximately 100 mAHD (Figure 27 and Figure 15 in 2.3.2). 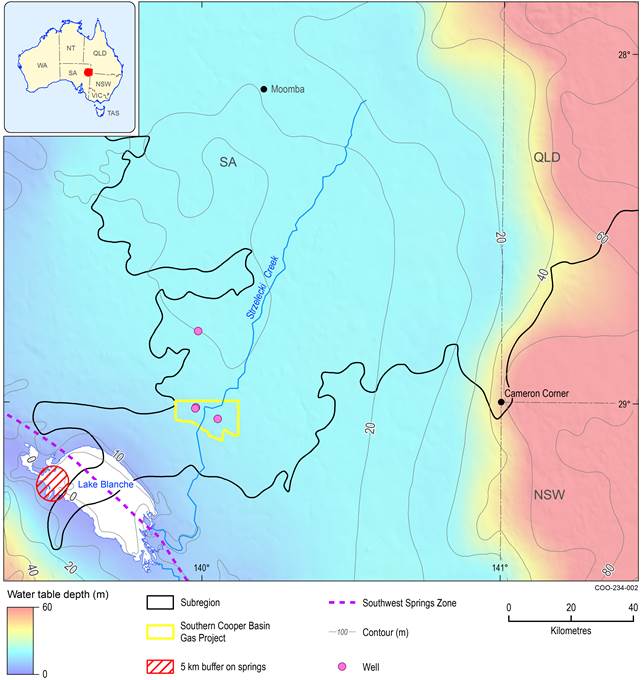 Full scale field development in the Southern Cooper Basin Gas Project will require a separate environmental assessment and approval under relevant legislation, additional to that which exists for the exploratory and testing operations. The following water management process is based on the exploration and production testing operations.

Water for drilling and stimulation activities is sourced from shallow bores adjacent to the well site, or trucked in and stored in lined ponds (storage for fracturing operations) or turkey nest dams (storage for drilling operations). Potential sources of water for any future development in the Southern Cooper Basin Gas Project are (Hydrogeologic Pty Ltd, 2014):

Management of produced water during production operations could be via (JBS&G Australia Pty Ltd and Strike Energy Limited, 2014):

The aim of produced water management is to reuse it for drilling and fracturing activities in preference to other water sources.

Pond size is dependent on predicted water production rate, predicted total produced water volumes, evaporation rates and site constraints. If water production rates require additional storage or disposal capacity, options such as the use of additional storage ponds may be needed (JBS&G Australia Pty Ltd and Strike Energy Limited, 2014). There is an accepted standard approach to the design and construction of ponds (e.g. Beach Energy, 2012), which are in line with the SA Environment Protection Authority (EPA) wastewater lagoon construction guidelines (Environment Protection Authority South Australia, 2014). These guidelines will be adhered to for ponds in the Southern Cooper Basin Gas Project.

Ponds will be constructed according to standard Cooper Basin construction methods (RPS Aquaterra Pty Ltd and Beach Energy, 2012; Santos, 2003). Excavation and bunding will be used to elevate pond walls above ground level. Ponds will be located on existing disturbed areas as far as practicable; however, it is likely that they will extend onto adjacent areas. Impermeable liners will be installed in ponds where required. If water quality is adequate to utilise ‘freeform’ evaporation areas, a low bund may be constructed to contain the water within a defined area. All ponds will be constructed in swales between dunes, which are expected to be disconnected from any receiving surface water features, such as Strzelecki Creek (JBS&G Australia Pty Ltd and Strike Energy Limited, 2014).

A camp would typically be designed to accommodate approximately 20 to 40 people. Camp wastewater is typically treated by a transportable aerobic wastewater treatment system and must be in accordance with the South Australian Public Health (Wastewater) Regulations 2013.

At the completion of operations, after pond water has evaporated or been pumped out, the liner and any salt residue will be removed and disposed to an appropriately licensed facility, the ponds will be backfilled and re-profiled to match pre-existing surface contours, and the surface will be ripped to promote revegetation (JBS&G Australia Pty Ltd and Strike Energy Limited, 2014).

Fuel, oils and chemicals are stored in accordance with applicable standards and guidelines, in approved containers in polythene-lined, bunded areas or on self-bunded pallets. Appropriate spill containment and clean-up equipment would be maintained on site, including chemical and hydrocarbon spill kits. Any spill that occurred would be contained, reported and cleaned up by treatment in situ where appropriate, or removal off-site for treatment or disposal (JBS&G Australia Pty Ltd and Strike Energy Limited, 2014).

Data collected during production testing have shown that water production rates are in the order of 30 to 85 kL/day per well. Typically, water is initially produced at higher rates, then tails off during production (Strike Energy Limited, 2015c).