There is no coal mining or stand-alone CSG production occurring in the Cooper subregion as of December 2012. As a result, the baseline does not contain any coal resource developments, for the purposes of companion submethodology M05 (as listed in Table 1) for developing the conceptual model of causal pathways (Henderson et al., 2016).

As identified in companion product 1.2 for the Cooper subregion (Smith et al., 2015), the only potential coal resource development in the subregion is the Southern Cooper Basin Gas Project, situated in the Weena Trough (Figure 25, Table 8). Coal seams in the Patchawarra Formation of the geological Cooper Basin at depths of around 1900 to 2100 m are production targets at this prospect. This potential CSG project is estimated to contain a prospective resource of 7375 PJ[1] (Strike Energy Limited, 2014a) according to the Guidelines for Application of the Petroleum Resources Management System (PRMS; Society of Petroleum Engineers, 2011), and is currently undergoing production testing at the Klebb and Le Chiffre sites (Strike Energy Limited, 2015b) (shown in Figure 25). Production testing at Klebb-1, Klebb-2, Klebb-3 and Le Chiffre-1 has shown that commercial flows can be anticipated from the resource area. A 2C resource (classification according to the PRMS) has been estimated for Le Chiffre-1 and Klebb-1, for a combined 2C resource of 168.6 PJ and a 3C resource of 244.8 PJ: 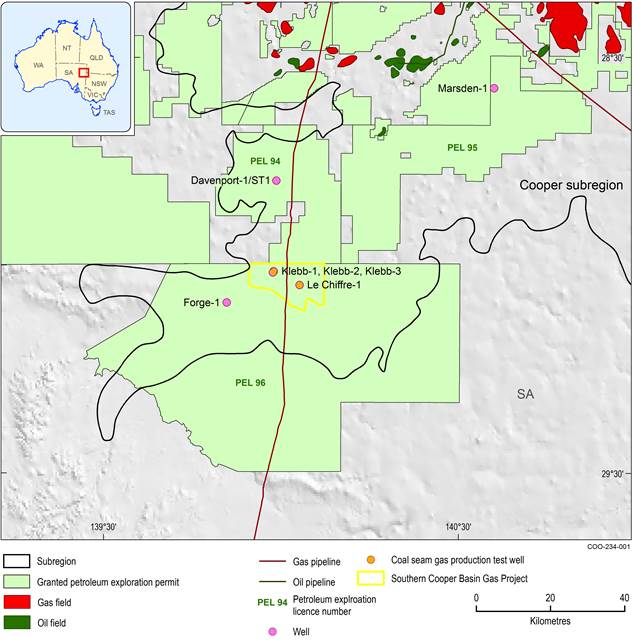 a‘Modelled’ indicates those developments that are numerically modelled in this bioregional assessment.

b‘Commentary’ indicates those developments for which only commentary is provided because they cannot be modelled.

A development timeline is provided in Figure 26. It is anticipated that the project will enter production sometime during 2020 or 2021, after a period of development and a production demonstration facility, and will have a production life of 20 years (Strike Energy Limited, 2015d).