Cooper Creek and the Thomson, Barcoo and Bulloo rivers are the major waterways in the Cooper subregion (Figure 18). The stream below the junction of Thomson and Barcoo rivers is known as Cooper Creek and is characterised by complex channel networks and numerous wetlands and waterholes. The Strzelecki Creek is another major waterway in the southern part of the Cooper subregion. It originates in the Strzelecki reserve and flows to Lake Blanche. The Coongie Lakes Ramsar Wetlands are located in the lower part of the Cooper creek basin, in the far north-east of SA (Figure 18). The Ramsar site includes the Cooper Creek system from the Queensland–SA border downstream to Lake Hope, the north-west branch of the Cooper Creek. The flow in Cooper Creek is highly seasonal often producing floods during summer rainfall (McMahon et al, 2008). Since 1970, a total of 39 floods have been recorded at Windorah with almost half categorised as major floods. During a large flood, floodplain between Currareva and Nappa Merrie becomes a huge inland sea broken only by a few ridges and numerous stunted trees (Bureau of Meteorology, 2015). Water quality information such as total phosphorus (TP), total nitrogen (TN), electrical conductivity (EC) and turbidity is scarce for this basin. EC levels are normally low and stable. Turbidity is high and subject to varying trends as a result of local influences.

Flow in Cooper Creek has not yet been affected by diversion of water for irrigated agriculture or major dams or weirs (McMahon et al., 2005). In the water resource plan for the Cooper Creek, the Queensland Government reserved 2000 ML of unallocated water (200 ML for general reserve, 1300 ML for strategic reserve and 500 ML for the town and community reserve) to meet future demand (DERM, 2011).

Previous monitoring data for waterbodies within the Lake Eyre Basin have indicated that a number of water quality parameters, such as nutrients and turbidity, are often elevated and can exceed existing default trigger values (Sheldon and Fellows, 2010; Sternberg et al., 2014). Sheldon and Fellows (2010) showed there are marked water quality differences relating to periods of floods and no-flow conditions from 15 waterholes sampled across Cooper Creek during 2001 to 2004. Data from the Lake Eyre Basin Rivers Assessment (LEBRA) water quality monitoring sites also showed a general pattern of increasing salinity throughout the low or no-flow periods, followed by sharp lowering during high-flow events. A number of LEBRA reports show electrical conductivity generally increasing from the upper to lower catchment, suggesting waterholes in the lower Cooper are naturally more saline (e.g. Sternberg et al., 2014; Mathwin et al., 2015). At some sites there is a distinct initial rise in salinity when the first flood water arrives (Cockayne et al., 2013).

Turbidity is high and subject to varying trends as a result of local influences. It appears turbidity decreases from upstream to downstream and then increases again before the Cooper Creek crosses the Queensland–SA border. Due to isolated waterholes forming during extended dry seasons in this basin, differing turbidity trends may be more representative of local influences than generally deteriorating water quality further downstream (DERM, 2011). In situ measurements at 17 sites (during spring 2011 and autumn 2012) show the turbidity varies from 4 to 354 Nephelometric Turbidity Units (NTU), with a mean and median of 124 and 126 NTU respectively across the Cooper creek basin (Cockayne et al., 2013).

The Cooper subregion contributes surface water predominantly to Cooper creek basin and a small proportion to Diamantina river basin by its floodplain pathways and numerous creeks. Both of these river basins are characterised by large variations in discharge and flow duration. Streamflow monitoring stations are relatively sparse in the Cooper subregion.

Water in the Cooper creek basin is predominantly derived from runoff from headwater catchments. The Thomson and Barcoo rivers, which originate outside the Cooper subregion, play an important role providing inflow into Cooper Creek. Transmission losses are generally very high. The long-term (1901 to 2003) average modelled runoff coefficient in the Cooper creek basin varies from a low of 1.2% for the Alice River at Barcaldine to a high of 6.6% for the Thomson River at Stonehenge. The runoff coefficients are 5.8% at Currareva and 1.6% at Nappa Merrie (McMahon et al., 2005).

Streamflow in Cooper Creek and its tributaries varies greatly between years from almost no flow to significant flooding, and between months with no flow for some months. Watercourses in this basin are ephemeral and carry water mostly between January and July. The maximum monthly flow varies depending on the location of the gauging site and contributing catchment area, with some sites having very high flows (up to 15,900 GL/month for Cooper Creek at Currareva). Both annual and monthly flows generally increase down the catchment, although there are exceptions to this trend. On average there is flow in Cooper Creek at Nappa Merrie about 60% of the time. The flow duration curves are steep for all gauging sites in the Cooper creek basin, confirming the observation that streamflow is highly variable and that there is little groundwater contribution to the overall flow (McMahon et al., 2005).

Records of large floods in the Cooper Creek extend back as far as the late 19th century, with the most significant episodes of flooding occurring in 1893, 1906, 1949, 1955, 1963, 1974, 1990 and 2000 (Bureau of Meteorology, 2015). Due to its low gradient, water flows very slowly on the floodplain. For a large flood, it takes around 16 days for the water to pass through the floodplain with a wave speed of 0.3 m/second, while for a small flood the speed can be as low as 0.1 m/second (Costelloe et al., 2003). The long travel time allows the air and earth to absorb much of the water on the flat floodplain. On average, the water of the Cooper Creek reaches Lake Eyre only once every six years (Kingsford et al., 1999). For the biggest flood in the recorded history of Cooper Creek (1974), around 25,000 GL of water inundated the creek and 40% of the water was lost by the time the flood peak arrived in Callamurra near the Queensland–SA border. For flow events below 5000 GL, the transmission loss is often above 80% (McMahon et al., 2005). The Coongie Lake is often found as the terminus of flow in the Cooper Creek for small to medium floods. The lakes and channels downstream of Coongie Lake receive flow less frequently and dry out more frequently (Costelloe, 2013). 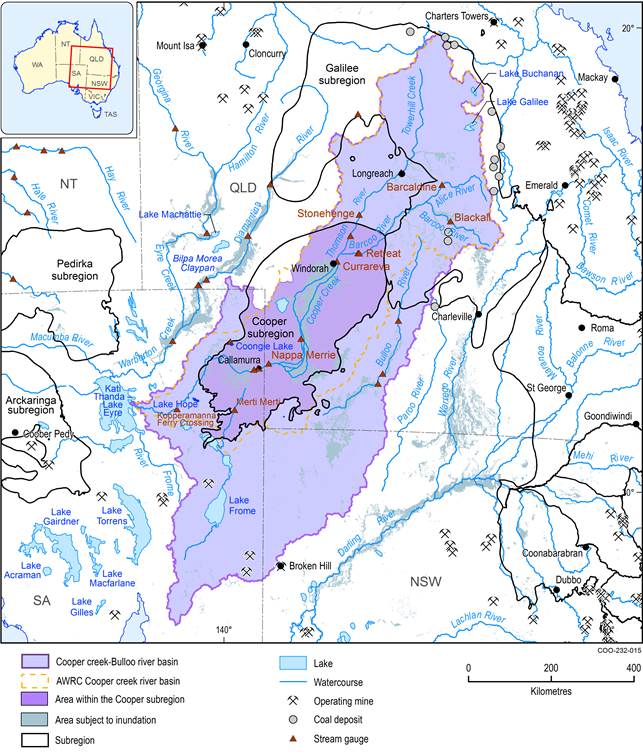