The IBRA Karuah-Manning and adjacent subregions support large areas of significant wetlands, coastal sand heaths and woodlands (DECCW, 2009). Major rivers in the IBRA Karuah-Manning subregion include the Manning, Gloucester and Karuah rivers (see Section 1.1.5). The tributaries of the Manning River rise immediately north of the Barrington Tops at an altitude of more than 1400 m above sea level. It is fed from the south by the Barrington, Gloucester and Avon rivers which flow through and drain the northern parts of the Gloucester subregion.

The Karuah River drains south from the lower slopes (600 m above sea level) of the Barrington Tops, past the Karuah National Park and into the north-western corner of the Port Stephens estuary (DECCW, 2010b). The Karuah River is also fed by the Wards and Mammy Johnsons rivers which also flow through the subregion. Together these rivers drain the southern parts of the subregion. The Port Stephens estuary supports 22 migratory and ten breeding shorebird species. Two endangered and eight vulnerable shorebird species listed under the TSC Act have been recorded at Port Stephens. The estuary, together with rivers, creeks and tributaries under tidal influence, are included in the Port Stephens-Great Lakes Marine Park. The estuaries of the NNC are dominated by mangrove communities composed of Avicennia marina, Aegiceras coniculatum, Exoecaria agallocha and saltmarsh species. Vegetation on freshwater margins consists of swamp oak (Casuarina glauca) and paperbark (Melaleuca quinquenervia) and flooded gum (Eucalyptus grandis) is prevalent on alluvial river flats. 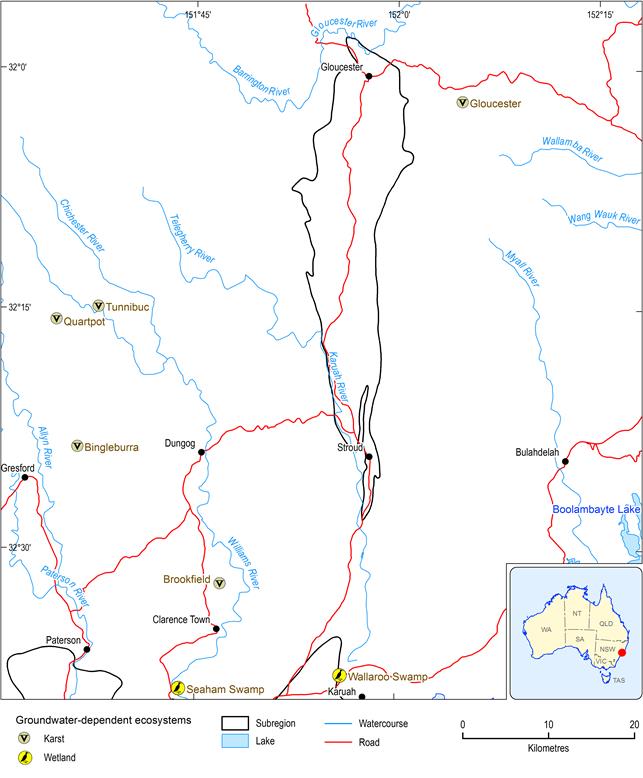