The Gloucester subregion is underlain by the geological, coal-bearing Gloucester Basin (Figure 22), a north-south trending basin approximately 55 km long with a width of 15 km at its widest point. It closes to the north (near the town of Gloucester) and to the south (near the Stroud Road) and has been previously referred to as a strongly deformed syncline, the Stroud-Gloucester Syncline or Trough (Roberts et al., 1991, p. 12).

The present definition of the structural framework for the Gloucester Basin relies on: (i) sparse two-dimensional seismic reflection data (Roberts et al., 1991; Grieves and Saunders, 2003), (ii) interpolation of surface geological mapping (Roberts et al., 1991), (iii) correlation of coal seams from borehole data (Grieves and Saunders, 2003), (iv) observations in open-cut mines (Grieves and Saunders, 2003), and (v) geophysical surveys (Parsons Brinckerhoff, 2013, p. 56). The low density and poor resolution of the seismic data, the limited number of outcropping structures and the high degree of lateral stratigraphic variation in the basin result in significant uncertainty about the location and orientation of subsurface structural features.

The axial trace of the Gloucester Basin is sinuous but generally strikes north to north-east (Figure 22; Roberts et al., 1991, p. 283). Seismic interpretation suggests the basin is a fault-bounded trough, with initial fault displacements during the Permian period (Roberts et al., 1991, p. 283). Coal seams outcropping on the basin flanks dip steeply, up to 60° (but mainly 30° to 50°) towards the basin axis (Roberts et al., 1991; AECOM, 2009, p. 17–23; Merrick and Alkhatib, 2012, p. 10; Brown et al., 1996, p. 55). Brown et al. (1996) provided evidence suggesting a flattening of coal seam dip towards the central axis of the basin. The basin’s structural elements (such as dip distribution and axial geometry) have been used to suggest, in some parts of the basin, a synclinal geometry. However, most of the steeply dipping beds are bounded by faults on the edge of the basin. As such, an alternative interpretation is that the steeply dipping beds are discrete slivers of sedimentary rock units deformed and rotated within fault zones. This type of structural architecture is well exposed and documented in the dominantly extensional Permian Collie Basin in Western Australia, where sequences that ordinarily dip less than 10° across the basin are tilted in fault zones on the basin flanks with dips greater than 70° (Le Blanc Smith, 1993). Roberts et al. (1991) also suggested that the north-western edge of the Gloucester Basin and the flexure of the eastern basin are controlled by both normal and shear faults. 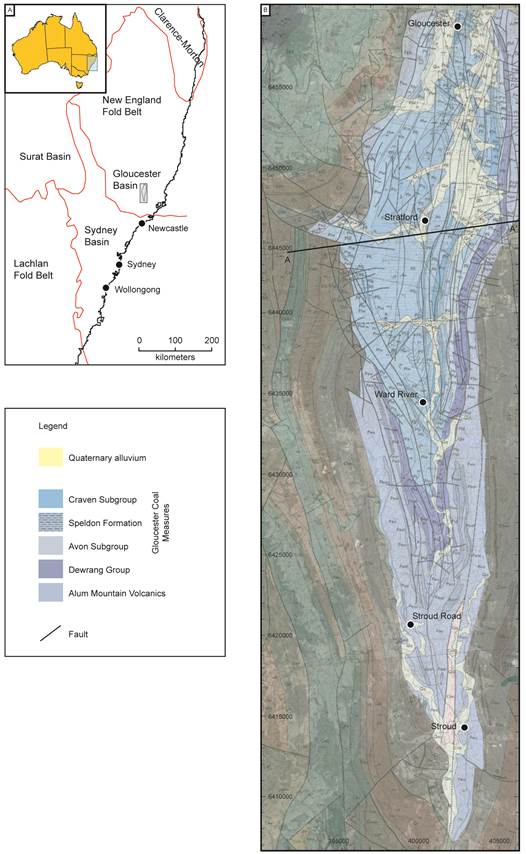 (A) Location of the Gloucester Basin. (B) Geological map of the Gloucester Basin with the Permian coal-bearing units highlighted (note the northern end of the basin is not shown). Detail of the cross-section ‘A–A’ is shown in Figure 23. For further description of the formation’s name, age and composition see the 1:100,000 Dungog geological map in Roberts et al. (1991).

Source: Roberts et al. (1991). Note that this figure is not covered by a Creative Commons Attribution licence. It has been reproduced with the permission of NSW Trade & Investment.

The Quaternary alluvium is not shown. Location of the cross-section ‘A–A’ within the Gloucester Basin is shown in Figure 22.

Source: Roberts et al. (1991). Note that this figure is not covered by a Creative Commons Attribution licence. It has been reproduced with the permission of NSW Trade & Investment.

The Gloucester Basin is interpreted as a fault controlled depositional trough of tectonic origin (Roberts et al., 1991, p.167). Faults in the Gloucester Basin have been geologically mapped on the surface, intersected by drilling, interpreted from seismic data or identified as lineaments on aerial photos and remotely sensed imagery (SRK Consulting, 2010; Roberts et al., 1991). Nevertheless, all of these datasets have some limitations and, consequently, the location and orientation of many faults are ambiguous in some areas (SRK Consulting, 2010; Roberts et al., 1991, p. 284).

Normal, strike-slip and reverse faults are characteristic of the basin. They occur throughout all of the Permian strata in the basin but have greater density near the flanks where dips are commonly sub-vertical (Roberts et al., 1991). Fault orientations are generally northerly striking with dips toward the central axis. North-east, north-west and east striking normal and strike-slip faults are reported near the margins or cutting through the Permian sequence with displacements of up to 60 m (Roberts et al., 1991, p. 283; Merrick and Alkhatib, 2012, p. 10; SRK Consulting, 2010). Coal exploration drilling on the eastern flank suggests several low angle (0° to 60°, Merrick and Alkhatib, 2012) thrust faults parallel to the basin axis, with apparent repetition and thickening or stacking of coal seams and accentuation of dip (Brown et al., 1996, p. 10). Folding of basin strata is also widespread with a general northerly trend (Roberts et al., 1991, p. 283; SRK Consulting, 2010). This can locally accentuate the dip of the strata and result in dip reversal (SRK Consulting, 2010).