In this section, national Australia-wide grids of daily precipitation (P; available from 1900 onwards) generated by the Bureau of Meteorology (Jones et al., 2009) are used; they are 0.05 degree (or ~5 km) grid cell resolution. The Penman formulation is used to calculate daily potential evapotranspiration (PET; a measure of the atmosphere’s ‘drying power’), which is calculated per Donohue et al. (2010), with meteorological data, other than daily average wind speed (McVicar et al., 2008), being provided by the Bureau of Meteorology (Jones et al., 2009). The PET data also have 0.05 degree (or ~5 km) grid cell resolution. The daily PET data (1982 onwards, due to use of satellite based albedo (the colour of the landsurface, defining how much sunlight is reflected) in the radiation calculations) and daily average wind speed data (1975 onwards, when the Bureau of Meteorology network of anemometers become suitable for national assessment) are generated, and made freely available, by CSIRO Land and Water.

Figure 17 Temporal characteristics of annual precipitation for the Gloucester subregion 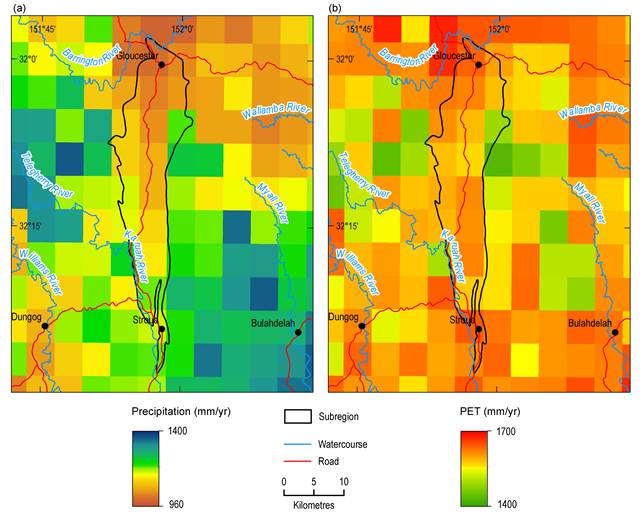 Within a year there is a strong seasonal cycle in precipitation (Figure 19). On average, the rainy season extends from December to March, with the winter months (i.e. July to September, inclusive) being the drier part of the year. When monthly P is compared to monthly PET we see that P has a similar magnitude to PET with PET being greater than P for most (not all) months. The Gloucester subregion can be considered as ‘equitant’ (i.e. straddling the water-limit and energy-limit) throughout the year (McVicar et al., 2012b). This suggests that actual evaporation (AET) in the Gloucester subregion is slightly water-limited (defined when the PET/P ratio is greater than 1.0, as opposed to being energy-limited; when PET/P is less than 1.0). Given the high amounts of precipitation (relative for Australian conditions) there will be high levels of AET and associated vegetation growth (see Figure 12 and Figure 13). 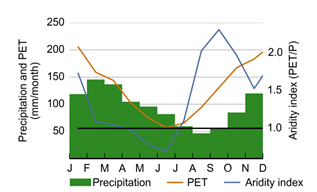 Figure 20 shows average monthly conditions over the last 30-years (i.e. 1982 to 2012), and below this there is temporal variability for precipitation, PET and the climatic factors (primarily air temperature, vapour pressure deficit, net radiation and wind speed) that govern PET. As expected, monthly P experiences greater variability when compared to other climatic factors (Figure 20). 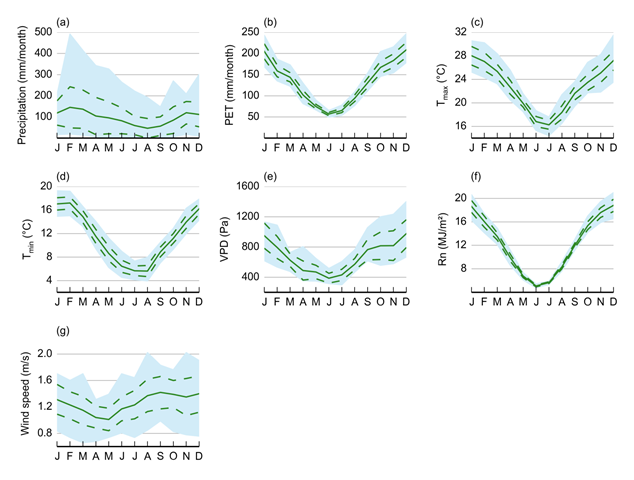 Monthly trends of precipitation, PET and all variables driving PET are shown in Figure 21. The monthly trends for precipitation straddle the no trend (i.e. zero mm/month/year) line, whereas PET, even in the face of warming air temperatures is declining. Declining rates of PET are due to declining amounts of net radiation and wind speed (in all months) and vapour pressure deficit (in most months), which together result in a larger change than the PET increases associated solely with increasing air temperature. Similar findings were reported for other areas of south-east of Australia (Donohue et al., 2010; Donohue et al., 2011; McVicar et al., 2012a). 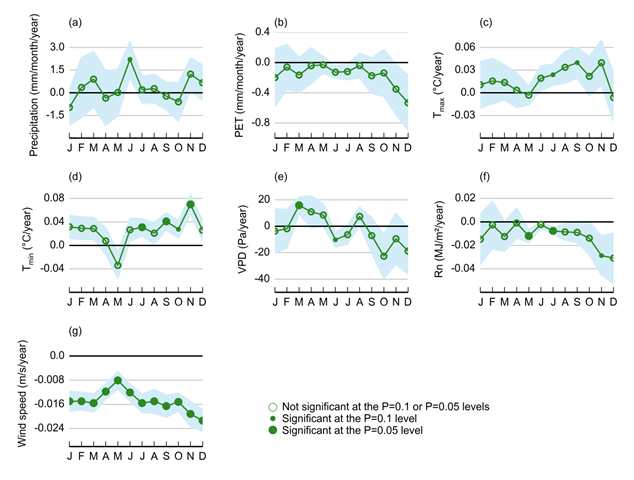 Figure 21 Annual trend by month of precipitation, potential evapotranspiration and other climate factors

While future climate projections produced by global climate models are unsure (GCMs; Lim and Roderick, 2009; Sun et al., 2011), one approach is to use their output and assess what future projections of rainfall and runoff will be. Using 15 CGMs from the Fourth Assessment Report of the Intergovernmental Panel on Climate Change (IPCC, 2007, hereafter referred to as IPCC AR4) Post et al. (2012) used the IPCC A1B global warming scenario output to transform historic daily climate records to provide future daily climate projections of P and PET that can used in a rainfall-runoff model. Compared to the global average temperature in 1990, the IPCC A1B scenario indicates a global temperature that is 1 °C higher in 2030 and 2 °C higher in 2070. This scenario is based upon: (i) very rapid economic growth, (ii) with global populations peaking mid-century and declining thereafter, and (iii) the rapid introduction of new and more efficient technologies with a balance across all energy sources (IPCC, 2007). Full details of the transformation of historic daily climate records using IPCC AR4 output are reported in Chiew et al. (2009) and Li et al. (2009).

Post et al. (2012) assessed the changes in P for the 15 GCMs and reported changes for large catchments such as the Manning River and Karuah River catchments, which form the broader context that the Gloucester subregion sits in (see Figure 7). Table 3 shows that for both catchments about two-thirds of the GCMs selected suggest there will be some decline in P. Taking account for the range of projections that may occur for the one-degree rise in temperatures (associated with 2030) there is approximately a –8%, –2% and 3% change in P projected for the dry extreme, median and wet extreme, respectively. For a 2-degree rise in temperatures (associated with 2070), these values are approximately –16%, –4% and 6%, respectively (Table 3).

To model future projects of runoff (Q), Post et al. (2012) used the future projections of daily P, along with a form of PET (specifically Morton’s wet environment areal formulation) as input to a lumped conceptual rainfall-runoff model called SIMHYD which utilises the Muskingum routing method (Chiew et al., 2009). Table 4 shows that the Post et al. (2012) modelling results suggest for a one-degree rise in temperatures (associated with 2030) there is approximately a –20%, –8% and 4% change in Q projected for the dry extreme, median and wet extreme, respectively. For a two-degree rise in temperatures (associated with 2070), these values are approximately –38%, –14% and 8%, respectively (Table 4). As noted previously the Gloucester basin is ‘equitant’ and so estimates of both P and PET are important for future projections of Q (McVicar et al., 2012b). Given this, use of Morton’s wet environment areal formulation of PET, which does not include wind speed in its formulation, means that the impact of declining rates of observed wind speed which are offsetting increasing air temperature enhancement of PET (Donohue et al., 2010; McVicar et al., 2012a; McVicar et al., 2012b) are not included in the resultant Q calculations. Hence the values presented in Table 4 are approximate projections only, as recent key process understanding is not encapsulated in the modelling.