Based on the geological setting and discrete structural-sedimentary formation (see Figure 22 and 23, Chapter 1.1.3), the Gloucester Basin which underlies the Gloucester subregion, is characterised as a closed hydrogeological system. Multiple groundwater studies (Australasian Groundwater and Environmental, 2013; Heritage Computing, 2009; 2012; Parsons Brinckerhoff, 2012a; 2012b; 2012c; 2013b) describe four main hydrogeological units within the basin: 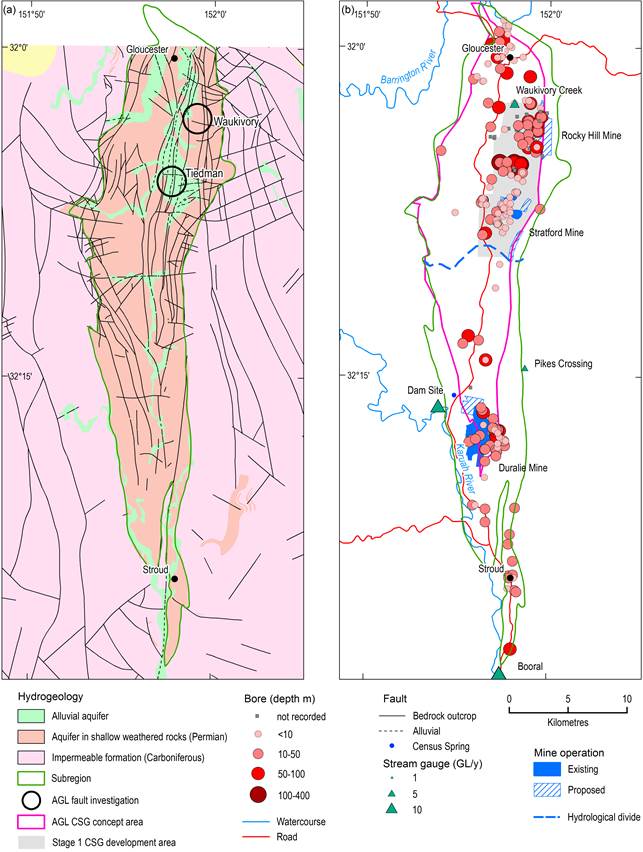 1.1.4.1.2 Fault systems and their hydrogeological characteristics

A large number of faults are known or inferred to underlie the Gloucester Basin (Figure 25) (Roberts et al., 1991). However, the effect of faults on hydraulic properties of formations is not well known. Some evidence of the role of fault systems on hydraulic properties of the formations in the basin are summarised by Parsons Brinckerhoff (2012c; 2013b). Key findings are listed below:

AGL plans to conduct a further hydrogeological investigation into faulting in association with the proposed Waukivory flow testing program. The thrust fault in the Waukivory area is typical of many fault systems across the eastern portion of the Gloucester Basin (see Figure 3.7 in Parsons Brinckerhoff, 2013c, p. 16).

According to the New South Wales Office of Water (NSW Office of Water), data for registered bores in the Gloucester Basin are categorised by use as: commercial or industrial; irrigation; mining; stock, domestic or farming; test or monitoring; and unknown.

Parsons Brinckerhoff (2013c) and Australasian Groundwater and Environmental (2013) provided a review of the NSW Office of Water groundwater database for the Gloucester Basin. Parsons Brinckerhoff (2013c) have identified registered bores: 24 used by stock and domestic supply; four used for irrigation; five used for commercial and industrial purposes; four for mining use; 121 for test and monitoring associated with mining in the area; and 30 are registered with unknown use.

Planning and management of groundwater systems in the region is undertaken by the NSW Office of Water, through water sharing plans (WSP) and reviewed every 10 years from date of commencement. Currently there is no WSP for the sedimentary (porous) rocks of the Gloucester Basin. As per NSW Office of Water, Water Sharing Plan website development of Northern Fractured and Porous Rock Groundwater Sources WSP will be commenced in 2014 (DPI, 2014). The WSP for the Karuah River Water Source (DIPNR, 2004) indicated no plans for groundwater extraction. The unregulated Avon River as well as the Barrington and Gloucester rivers and the associated alluvial groundwater source are managed under the Lower North Coast Unregulated and Alluvial Water Sources Water Sharing Plan (DPI, 2009). As per this WSP there are 212 ML/year under groundwater extraction licences, authorising extraction for irrigation from these water sources, including the following: