For this report, groundwater quality information is primarily sourced from data compiled and interpreted by RPS (2012). RPS (2012) datasets were not crosschecked for completeness or accuracy of interpretation for the contextual reporting component of the bioregional assessment. The RPS study sourced groundwater quality information from the Department of Environment and Resource Management (DERM) groundwater and Queensland Petroleum Exploration Data (QPED) databases (extracted December 2010). These are state based bore databases that contain archival information ranging in age from present day to several decades ago.

RPS (2012) tagged groundwater quality data with the name of the formation from which the sample was derived. The depths of the aquifers sampled ranged from 2 to 2999 m below ground. Groundwater salinity for the key aquifers sampled has been grouped into the three main stratigraphic groupings found in the subregion, i.e. Cenozoic, Eromanga Basin and Galilee Basin (Table 5).

No groundwater quality information was identified for the Adavale, Belyando or Drummond basins or the Thomson Orogen basement.

The limited available data for the Permian – Carboniferous Joe Joe Group are located in the central part of the subregion (Figure 23). Groundwater quality ranges from fair to brackish (600–10,000 mg/L Total Dissolved Solids (TDS)) with no apparent spatial segregation. This is partly due to the limited number of bores with data and also partly attributed to the potentially complex three dimensional spatial distribution of water quality within the Joe Joe Group and its formation aquifers. 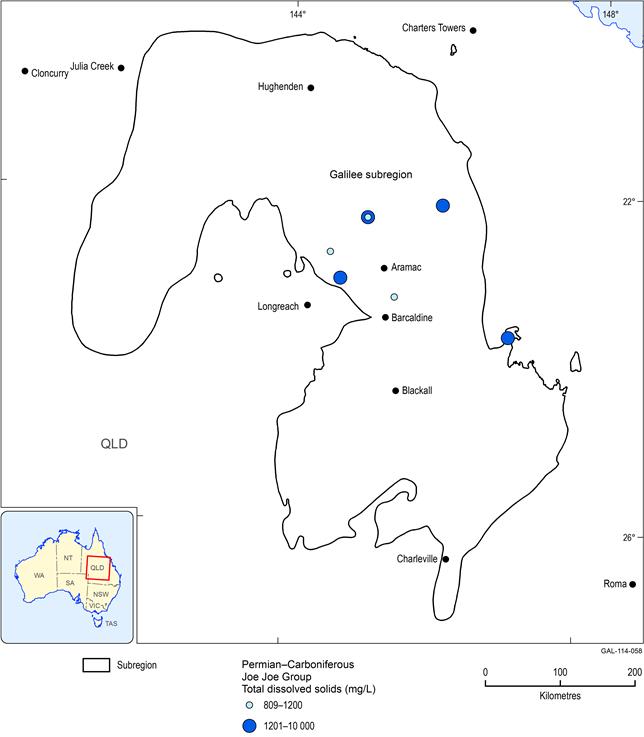 The main aquifers of the Eromanga Basin include the Cretaceous Winton and Mackunda formations, the Jurassic – Cretaceous Hooray Sandstone, and the Jurassic Hutton Sandstone. The water quality data have been compiled by RPS (2012) using DERM (2012) and QPED databases, and the greatest number of samples with depth information were taken from the Hooray Sandstone (n = 100) and the Hutton Sandstone aquifers (n = 195).

Overall, the water quality of the main aquifers from the Eromanga Basin ranges from fresh (19 mg/L TDS) to saline (17,073 mg/L TDS), with most water being fresh and fair to poor (median and mean of 333 mg/L and 688 mg/L TDS respectively).

The Jurassic Hutton Sandstone aquifer predominantly consists of fresh water to approximately 1000 m depth, with salinity slightly increasing with depth (Figure 24). These bores are well distributed across the north-west, north and central part of the subregion (Figure 27). Fair to poor water (600–1200 mg/L TDS) mainly occurs at depths of 800 to 1200 m (Figure 24) and the bores are mainly located in the central part of the subregion, on or adjacent to the Maneroo Platform. The quality of the groundwater obtained from the same location may vary with depth, as evidenced from the overlapping of different water quality symbols on the spatial map (Figure 27).

Groundwater from the Hooray Sandstone aquifer was sampled from a wide range of depths, from 80 to 1100 m (Figure 25). The salinity generally increases with depth but there appears to be two populations. The first population has fresh water at shallow depth and becomes fair to poor at depths reaching 1000 m. The second population contains fair to poor water and becomes brackish at depths of 1000 m or beyond. Two anomalous samples at shallow depths less than 100 m have brackish to saline water.

Bores tapping the Hooray Sandstone aquifer that provide fresh water lie in the north and central part of the subregion (Figure 27). The majority of the bores with fair to poor water (600–1200 mg/L TDS) lie in the central region of the Galilee subregion. Bores that produce brackish water (1,200–10,000 mg/L TDS) lie on, or adjacent to, the western margin of the Galilee subregion or occur in the vicinity of Hughenden township.

Samples obtained from the Cretaceous Winton and Mackunda formations range in depth from 60 to 840 m (Figure 26), with the majority between 100 to 200 m. The salinity of the groundwater, especially for the Winton Formation, increases rapidly with depth from fair and poor to saline. There is no spatial partitioning of groundwater quality in these aquifers (Figure 28).

The Cretaceous aquifers of the Wallumbilla Formation and the Ronlow beds tend to yield fresh water, with a few bores having fair and poor or brackish groundwater (Figure 28). 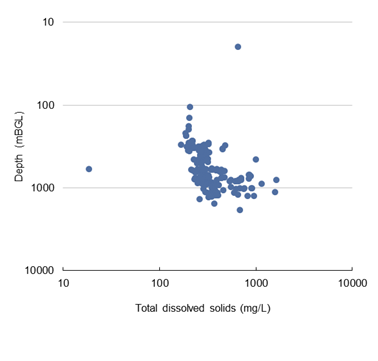 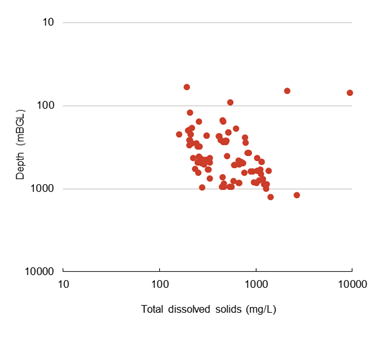 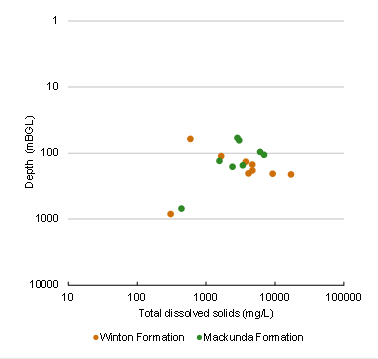 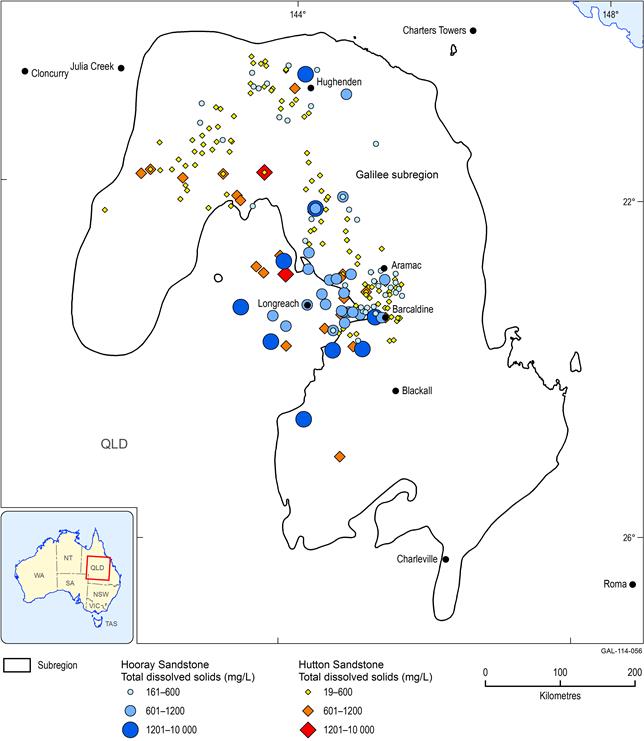 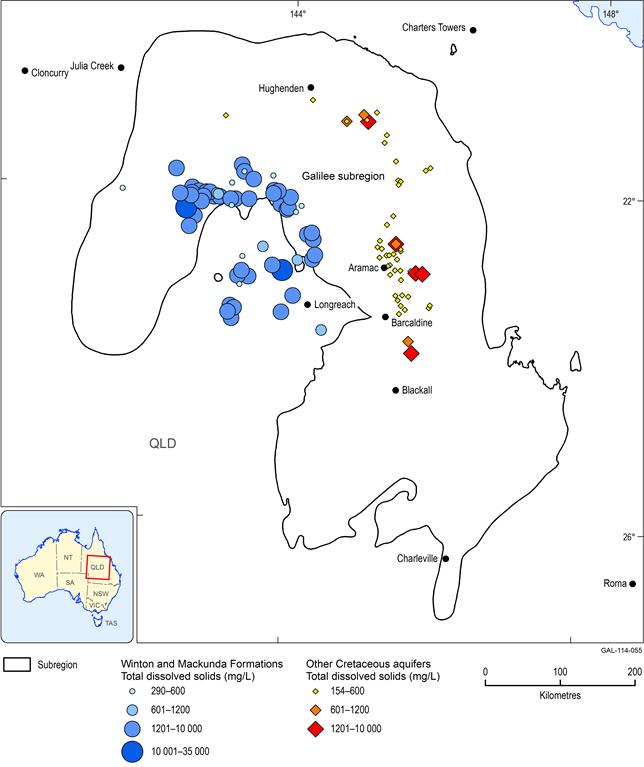 The Cenozoic aquifers, which include the Quaternary alluvium and other Cenozoic sediments, are important groundwater resources in the subregion. In the RPS (2012) dataset, the groundwater sample depth ranged from less than 10 m to approximately 150 m (Figure 29), with most Quaternary alluvium sampled at depths of less than 30 m and the other Cenozoic aquifers sampled between 30 and 140 m. RPS (2012) suggested that there are probably at least twice as many bores as those shown in Figure 30 tapping into the Cenozoic aquifers.

The water quality of the Cenozoic alluvial aquifers ranges from fresh to saline (minimum and maximum of 48 to 13,618 mg/L TDS respectively). According to the Australian Drinking Water Guidelines classification (NHMRC and NRMMC, 2011), most groundwater in the Cenozoic aquifers is classed as fresh (<600 mg/L TDS) or fair to poor (600–1,200 mg/L TDS), with a median of 492 mg/L and a mean of 1057 mg/L TDS (Figure 29).

The water quality in the Quaternary alluvium aquifer shows an increase in salinity with depths (Figure 29), from very fresh (<100 mg/L TDS) to brackish (~3000 mg/L TDS). This may represent the chemical evolution of the groundwater as it flows from shallow recharge areas to deeper parts (~30 m depth) of the alluvium. In comparison, the water quality from other Cenozoic aquifers does not exhibit any distinct relation with depth or spatial pattern (Figure 30). 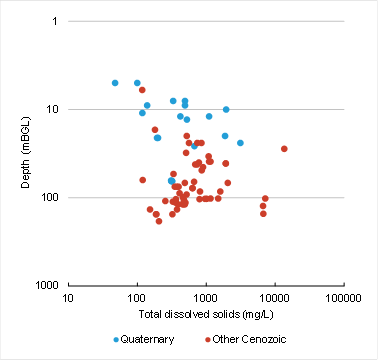 Figure 29 Graph of depth and groundwater quality for Cenozoic aquifers 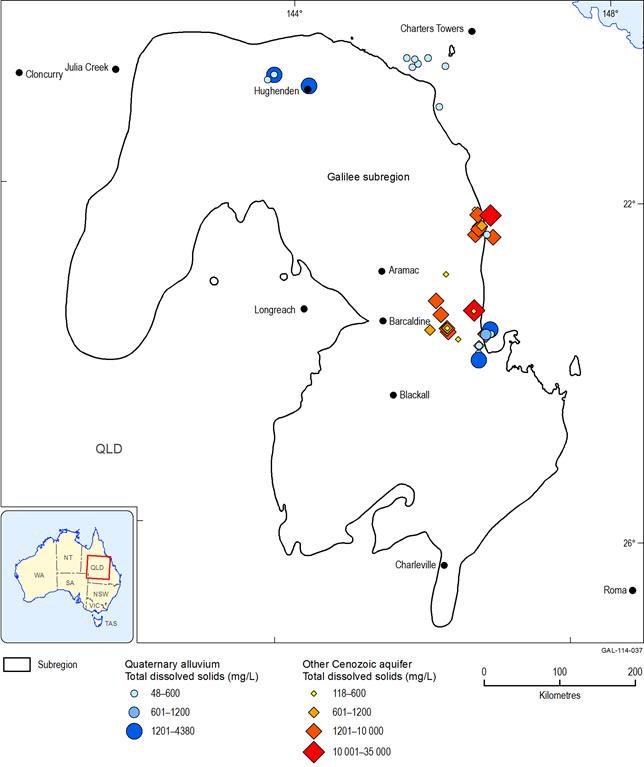