The subregion is sparsely populated, though exact numbers are difficult to determine because population statistics are only available for selected urban areas and other statistical subdivisions which do not coincide with the Galilee subregion boundaries. Three small urban areas with a population greater than 1200 (Barcaldine, Blackall and Charleville) and five smaller localities (Richmond, Hughenden, Aramac, Tambo and Augathella) are included within the subregion. An additional small urban area (Longreach) and four localities (Winton, Quilpie, Alpha and Julia Creek) lie just outside the margins (Figure 9, Table 2). These urban areas have combined populations of 8,775 and 5,496, respectively, for a total urban population of 14,271. There was a significant decline in the urban population over the decade 2002 to 2011, typically in the 5 to 10% range and averaging 7.3% for all centres. However, the decline was considerably higher in some localities such as Augathella (27.4%), Winton (14%) and Julia Creek (24.4%). The decline is consistent with an Australia-wide decline in inland rural population and contrasts markedly with substantial increases in Queensland as a whole and in larger urban centres, especially in coastal zones. Comparison between 2011 and 2012 suggests that the general population decline of the previous decade has halted with many centres showing very small increases and an average increase of 0.3% across all centres (Table 2).

Table 3 Population of local government areas in the Galilee subregion 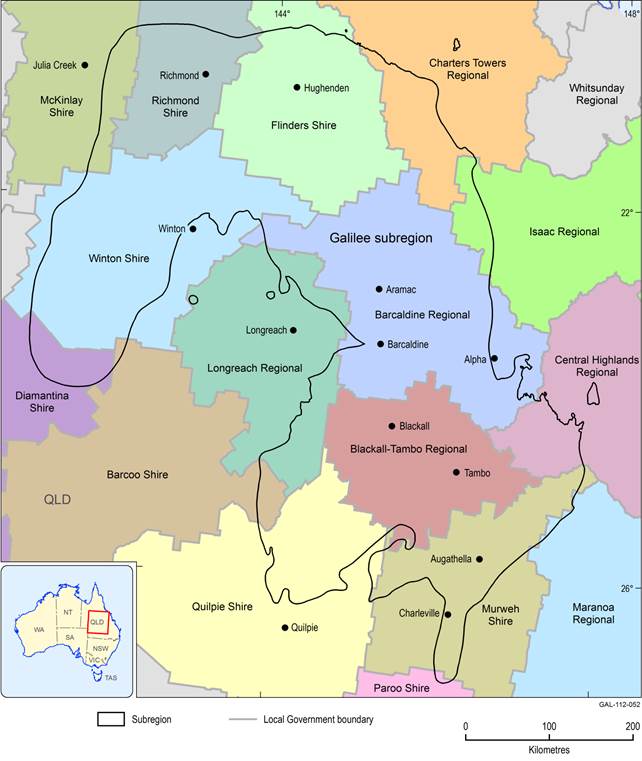 The major economic activities in the Galilee subregion are primary production (mostly rangeland grazing), government services, retail, education and tourist-related activities. The employment statistics from the 2011 census (Table 4)(ABS, 2013b) reflect these characteristics. The census data are provided in various areal categories, none of which exactly coincide with the Galilee subregion. Table 4 contains employment category data from four LGAs (the Winton, Flinders, Barcaldine Regional and Blackall-Tambo Regional shires), which are all contained mostly within the subregion and together comprise a substantial proportion of the subregion. The summary statistics combined from these four shires are regarded as very likely to be representative of the subregion as a whole. By far the most dominant occupation (32.5%) is in the agriculture, forestry and fishing category. With limited forestry restricted to the south-eastern corner and no coastal connection for fishery, this category is dominated by sheep and beef production. Clearly the second most important category is government services, which includes local government and health and social service care (19.8%). This is followed by five categories including retail trade; construction; education and training (schools mostly); transport, postal and warehousing; and accommodation and food services, which all provide significant employment (5 to 8%) in the subregion. All other categories listed in the census results, including mining, are currently low-level occupations (<2.5%) within the subregion.

Currently mining is a low-level occupation category within the subregion at 1.3% but this may increase during the constructional and/or operational phases of projected coal mining and coal seam gas extraction developments, with possible impacts on other employment categories.

Table 4 Occupation categories in four local government areas within the Galilee subregion, listed in decreasing order of numbers of participants

Land use in the Galilee subregion is shown in Figure 10 (ABARES, 2012) and is dominated across most of the area by stock grazing on natural vegetation. Nature conservation areas, chiefly such as national parks, occur in the eastern highlands and in the western portions of the subregion. In the eastern highlands, national parks are scattered throughout but are more common in the north-eastern and south-eastern parts and consist of broader range and tableland areas (such as White Mountains, Salvator Rosa and Ka Ka Mundi national parks) or more restricted elongate areas focused on specific gorges (Porcupine Gorge National Park). In the north-western portions of the subregion, larger national parks such as the Diamantina and Goneaway straddle the boundary while Bladensburg and Astrebla Downs national parks occur just outside the boundaries. Similarly, the Idalia and Hell Hole Gorge national parks in the south-western subregion and the Welford and Mariala national parks occur just outside the boundaries. Some areas of production forestry land also occur in the south-eastern subregion in the vicinity of the western Carnarvon National Park.

Most of the Galilee Basin is within the Desert Channels natural resource management (NRM) region which corresponds to the Queensland portion of the Lake Eyre drainage catchment. The Desert Channels Natural Resource Management Plan 2010 to 2015 is voluntary and lacks statutory power but was designed to include the monitoring, evaluation, reporting and improvement processes included in the Australian Government’s natural resource management planning frameworks and to support relevant Australian and Queensland government legislation. The management plan and the focus of the Desert Channels Group tends to be on specific on-ground measures to improve land, water and biodiversity assets by addressing factors like soil erosion, stream bank condition and weed and feral animal control. Smaller peripheral portions of the subregion fall within different NRM regions including the Southern Gulf NRM region in the north, the Burdekin NRM region in the east, the Fitzroy NRM region in the south-east and the South West Queensland NRM region in the south. All of these NRM regions have active management committees and plans. 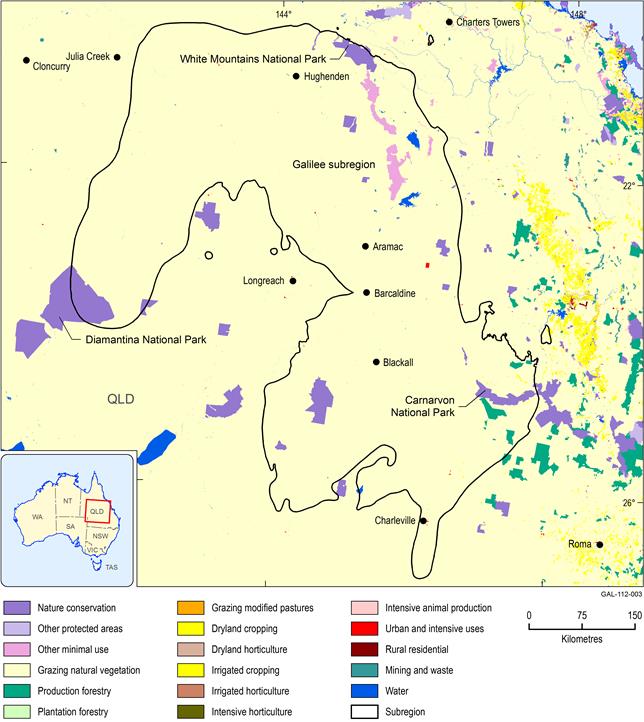 Indigenous heritage of the Galilee subregion is complex with inclusion of at least 12 Indigenous tribal/language groups in four separate language regions – Eyre, Gulf, Northeast and Riverine (Horton, 1994). There are native title claims covering large portions of the subregion and a number of Indigenous Land Use Agreements (ILUAs) in place. ILUAs are negotiated agreements between native title claimants and others about the use and management of lands and waters and were introduced by 1998 amendments to the Commonwealth’s Native Title Act 1993. An ILUA can be negotiated and registered separately to a native title determination. ILUAs in the Galilee subregion include (at the time of writing) the Yirendali People in the Hughenden area in the north; the Wangan, Jagalingou and Bidjara peoples which extend into the eastern margins of the subregion; and the Maiawali and Karuwali peoples on Brighton Downs, Muellers Range and Chiltern Hills stations south-west of Winton in the in the north-west of the subregion. An ILUA registered by the Mardigan people in the Quilpie area just extends into the south-western portion of the subregion.