The topography (Figure 5) of the subregion reflects this physiographic context and the elevation generally declines to the west from the eastern highlands. Though the subregion does extend east of the Great Dividing Range watershed, most of the headwater reaches of the Fitzroy and Burdekin river basins included in the subregion are incised parts of the eastern highlands and are above 500 mAHD. The eastern highlands within the subregion are quite complex with two broad areas continuously over 500 mAHD in the south and the north linked by two relatively narrow parallel arcuate lines of ranges with crests mostly below 500 mAHD. The eastern line of these ranges forms the Great Dividing Range. Between these ranges lies an elongate intermontane valley that extends for almost 400 km. The western line of range is breached by upper elements of the Thompson and Barcoo river systems incorporating parts of the intermontane valley into the westerly drainage. In two places the valley has closed internal drainage forming the catchments of the playa lakes Buchanan and Galilee. In the southern part of the subregion, in the Warrego, Bulloo and south-eastern Barcoo river basins, the topography declines to the west and south-west of the eastern highlands but maintains an elevation above 200 mAHD. In the northern and north-western parts of the subregion the elevations are generally lower with extensive parts of the major drainage valleys of the Barcoo, Thompson, Diamantina and Flinders rivers lying below 200 mAHD and elongate interfluves between those valleys above 200 mAHD. In the north-west an eastward extension of the Selwyn Range in the Mount Isa area extends into the subregion. 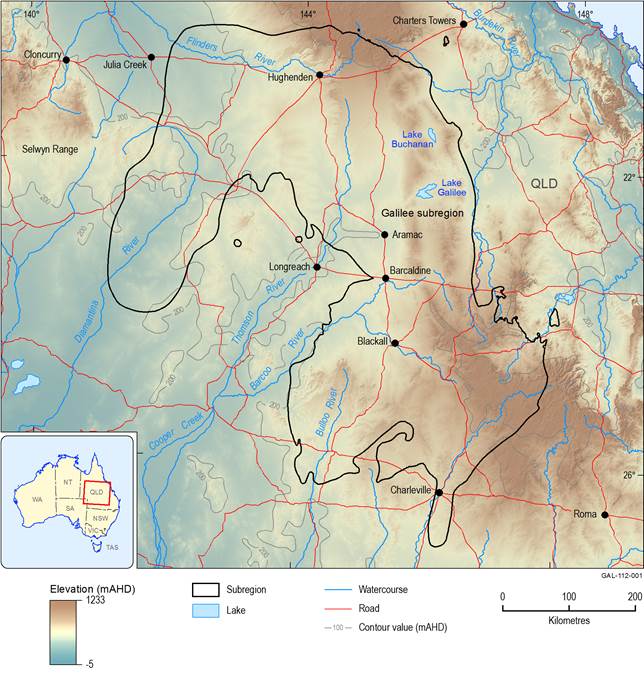 Figure 5 Topography of the Galilee subregion, generated from the 3-second digital elevation model

A physiographic region is defined as a discrete morphological unit with internal coherence of its landform characteristics (Jennings and Mabbutt, 1977). Physiographic regions are defined and mapped by landform characteristics that reflect uniform landform evolution, underlying geology and contained regolith materials (Pain et al., 2011). Early, largely descriptive, state-based treatments of Australian physiography that included Victoria (Hills, 1940) and Western Australia (Jutson, 1914) progressed to continental-scale physiographic mapping by Jennings and Mabbutt (1977) using improved topographic maps and other data. Physiographic mapping is descriptive and provides a regional-scale classification of landforms and related physical geography as they reflect underlying geological and climatic controls. The most recent national-scale physiographic mapping by Pain et al. (2011) extends the mapping of Jennings and Mabbutt (1977) by utilising the Shuttle Radar Topography Mission (SRTM) digital elevation model and other new data such as national and state soil and land survey data in a GIS mapping system. The classification has three divisions at the broadest level, 23 provinces distinguishing major physiographic changes, and 220 regions forming the basic subdivision of internally consistent landform morphology and inferred origin (Pain et al., 2011).

The Galilee subregion spans elements of the upper Lake Eyre drainage catchment, Bulloo river basin and Murray–Darling Basin and the adjacent eastern highlands. The subregion also extends into the upper coastward Burdekin and Fitzroy river basins to the north-east and east and the Gulf of Carpentaria to the north-west. This geographic complexity ensures that the Galilee subregion spans a number of physiographic regions with a relatively complex pattern in the eastern highlands and headwaters (Figure 6). In terms of the broad-scale physiographic divisions the subregion lies dominantly in the Interior Lowlands division but extends north-east across the boundary to the Eastern Uplands division. At the intermediate scale (physiographic province), the subregion falls dominantly into the Central Lowlands province and extends to the north-east into the south-western margins of the Burdekin Uplands and Fitzroy Uplands provinces. At the north-western subregion margin, small portions of the Carpentaria Lowlands province occur. 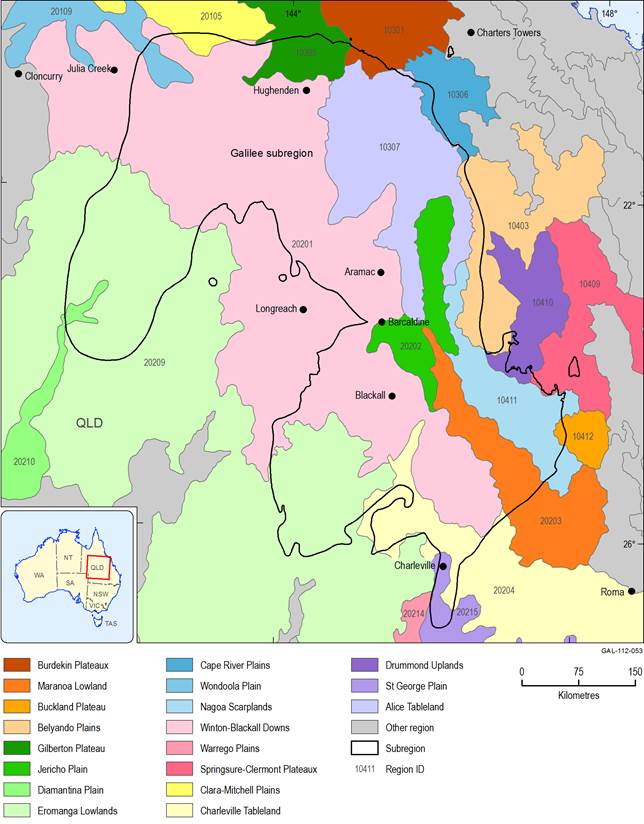 Two of the well represented physiographic regions are in the Burdekin Uplands province and one in the Fitzroy Uplands province with the following characteristics, including region identification number, derived from Pain et al. (2011):

Figure 7 shows the subregion soils derived from the Australian Soils Classification (Isbell, 2002), which is a hierarchical classification that particularly features the soil B horizon characteristics and also provides an assessment of the soil agricultural potential. The soil characteristics described in this section are sourced from Isbell (2002). Comparison between Figure 6 and Figure 7 indicates correspondence between physiographic region and soil type. The Winton-Blackall Downs physiographic region (which extends north-west to south-east across the subregion west of the eastern highlands) coincides with a band dominated by Vertosols which, in the north-western part of the subregion, extends to both the north-east and south-west of the Winton-Blackall Downs into adjacent physiographic regions. Vertosols are clay-rich soils characterised by shrink-swell properties that produce both strong cracking when dry and gilgai microrelief at the surface and slickensides and lenticular aggregates at depth. Gilgai microrelief is an irregular generally polygonal pattern of alternating mounds and depressions, at variable scales, produced by physical subsoil movements in alternate shrink-swell cycles due to wetting and drying. Soil properties and profiles of gilgai mounds and depressions can vary. Vertosols have high agricultural potential with high fertility, variable structure depending on wetting state, and good water-holding capacity.

The Eromanga Lowlands west of Longreach in the Galilee subregion are a topographically controlled complex mix of Vertosols, Sodosols, Tenosols, Rudosols and minor Kandosols and Dermosols. Sodosols show strong texture contrast with a highly sodic B horizon and pH greater than 5.5. They generally form on highly to moderately siliceous parent material and generally have low agricultural potential, low to moderate fertility, poor structure, low permeability, high erodibility and soil salinity. Tenosols are a diverse range of weakly developed sandy soils with an A horizon and are generally formed on highly siliceous parent materials. They tend to have low agricultural potential, low fertility, poor structure and low water-holding capacity. Rudosols are young soils with minimal pedogenic organisation and can vary widely in terms of texture, structure and depth. Dermosols have a low texture contrast with low free iron in the B horizon, are formed on a range of parent material from siliceous to intermediate and basic, and have high agricultural potential, moderate to high fertility, good structure and water-holding capacity. Kandosols are non-calcareous soils that lack a strong texture contrast and are developed on highly siliceous to intermediate parent material. They have low to moderate agricultural potential with moderate fertility and water-holding capacity. The Eromanga Lowlands immediately north-west of Charleville are dominated by Kandosols with minor Rudosols, Sodosols and Vertosols. 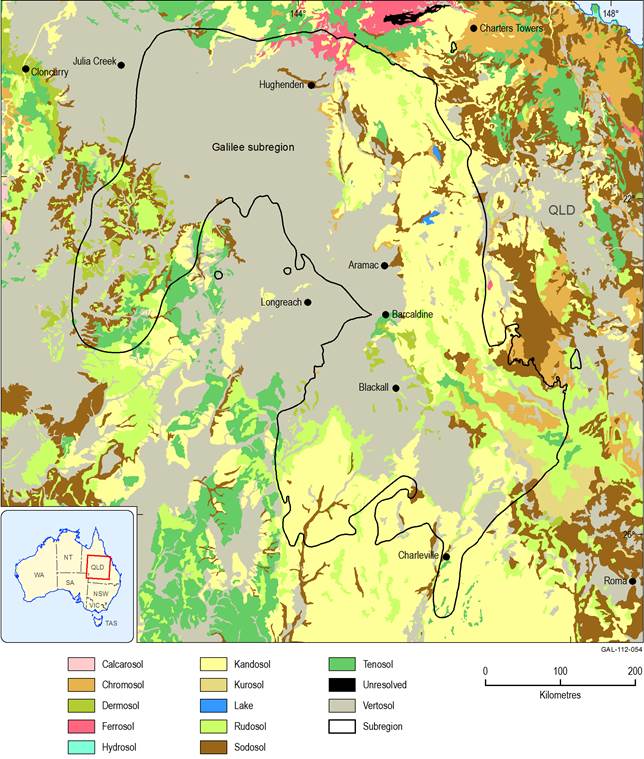 The eastern highlands physiographic regions of the Galilee subregion are more complex and have a corresponding complexity of soil types. In the north the Gilberton and Burdekin plateau physiographic regions have Ferrosols in addition to Vertosols, Tenosols and Kandosols. Ferrosols are soils without a strong texture contrast and with high free iron-oxide content in the B horizon. They are developed on intermediate to mafic parent material and have high agricultural potential, high fertility, good structure and water-holding capacity. Further south, the Alice Tableland, Jericho Plains, northern Nagoa Scarpland and Maranoa Lowland physiographic regions are dominated by Kandosols with minor Vertosols, Sodosols, Rudosols, Tenosols Chromosols and Dermosols. Chromosols have strong texture contrast and non-acidic and non-sodic B horizons and are formed on highly siliceous to intermediate parent material. They have moderate agricultural potential, moderate fertility and water-holding capacity. The Nagoa Scarplands and Maranoa Lowland physiographic regions of the south-eastern portion of the subregion have elongate bands of soil types parallel to the north-west trend of the highlands, which probably reflect alternating valley and range physiography. Soil types represented are mainly Chromosols, Rudosols and Calcarosols with more minor Kandosols, Tenosols and Sodosols. Calcarosols are soils characterised by calcium carbonate, especially in the B horizon subsoil, and can develop on a range of highly siliceous to intermediate parent material. They generally have low to moderate agricultural potential, low fertility and water-holding capacity. They may also have high salinity, alkalinity and boron toxicity.

Figure 8 shows the dynamic land cover distribution across the Galilee subregion derived from Geoscience Australia remote sensing mapping which uses a time series analysis of 34 structural vegetation classes ranging from cultivated and managed land covers (crops and pastures) to natural land covers (forests and grasslands) (Lymburner et al., 2011). The subregion is characterised by many different land cover classes but the broad distribution pattern of classes clearly reflects the physiographic regions and the soil class distribution as shown in Figure 6 and Figure 7. The Winton-Blackall Downs, which extend north-west to south-east across the subregion, are dominated by sparse tussock grasses with thin corridors of scattered trees along the drainage lines. To the south-west, the Eromanga Lowlands have a more complex pattern of sparse hummock grasses, sparse tussock grasses, scattered grassland and sparse shrubs, reflecting topography. This domination by grasslands reflects the inability of the clay-rich soils to provide sufficient accessible moisture to support trees in this semi-arid seasonal rainfall area. The eastern highlands portion of the subregion is dominated by sparse and scattered trees with small areas of open trees which become dominant in the south-eastern corner. The Gilberton Plateau physiographic region in the north-eastern highland portion of the subregion has open hummock grassland, and significant areas of rain-fed pasture are present in the south-eastern corner of the subregion. 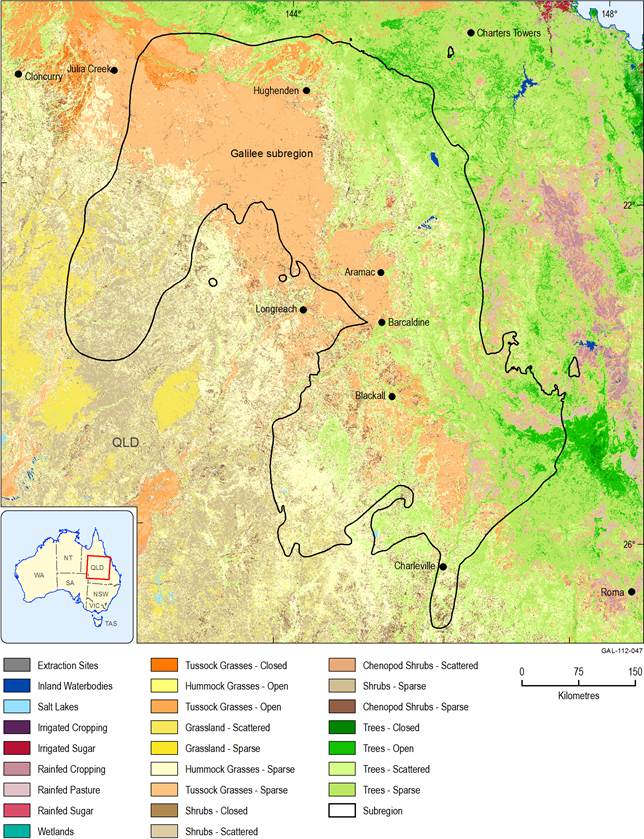