1.1.3.1.1 Definition of the basin, basin extent and regional geological context

The Clarence-Moreton Basin is an elongated intracratonic sag basin which overlies the mid to late Paleozoic rocks of the New England Orogen in south-east Queensland and north-east New South Wales (Korsch et al., 1989). It covers approximately 38,000 km2 on-shore, and contains sedimentary sequences of Middle and Late Triassic to Lower Cretaceous age with a combined thickness of up to approximately 3500 to 4000 m. The basin extends from the Kumbarilla Ridge in the west to the coast in south-east Queensland and into northern New South Wales (Figure 15). It is the youngest of a series of linked Mesozoic basins in the region (Johnstone et al., 1985). The formation of the Clarence-Moreton Basin and adjoining Mesozoic basins is closely related to large-scale tectonic processes associated with the development of the New England Orogen and the reorganisation of tectonic plates which began in the Late Carboniferous (Korsch et al., 1989).

The Clarence-Moreton Basin has three sub-basins (Martin and Saxby, 1982) which, from north-west to south-east, are the Cecil Plains, Laidley and Logan sub-basins (Figure 17). Within these sub-basins and especially within the Logan sub-basin, multiple subsidiary structural features have been identified based primarily on seismic interpretation (O’Brien et al., 1994a; Ingram and Robertson, 1996).

More recently, Day et al. (2008) suggested that the boundary between the Clarence-Moreton and Surat basins may be located further to the east at the Toowoomba Strait (Figure 17). This would mean that much of the Cecil Plains sub-basin forms part of the Surat Basin (Jell, 2013).

The Laidley sub-basin is separated from the Cecil Plains sub-basin to the west through the Gatton Arch, and from the Logan sub-basin to the south by a structurally complex basement high (South Moreton Anticline). The West Ipswich and East Richmond faults form the western and eastern boundaries of the South Moreton Anticline, respectively. The Logan sub-basin consists of several basement highs and troughs, including the Casino Trough and the Grafton Trough (Ingram and Robinson, 1996) and the offshore Yamba Trough (Wells and O’Brien, 1994). In addition, the Logan sub-basin is also partly divided along the Queensland – New South Wales border by a group of intermediate intrusions of Cenozoic age. 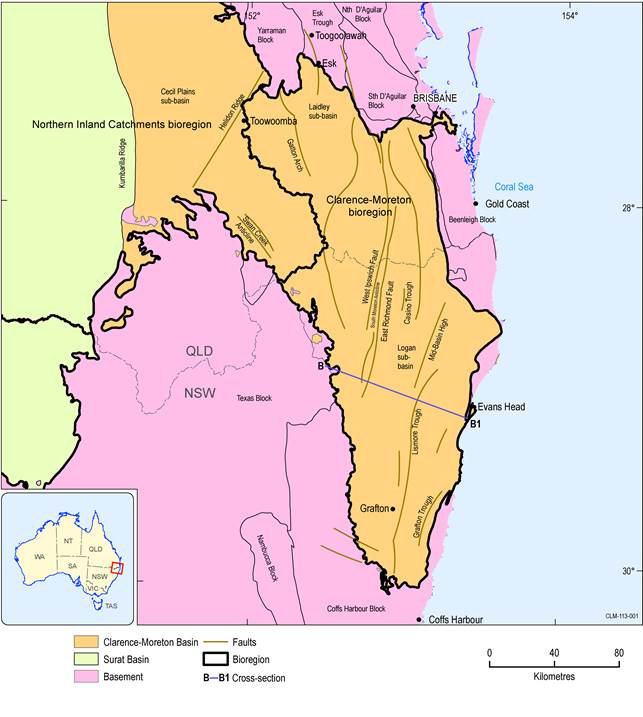 Source data: derived from data presented in Wells and O’Brien (1994a)

The maximum thickness of sedimentary rocks intersected in drill holes in the Clarence-Moreton Basin is approximately 2500 m in the Logan sub-basin (conventional petroleum exploration well Kyogle-1, Wells and O’Brien, 1994b). However, a sedimentary thickness of approximately 3500 to 4000 m is inferred from seismic interpretations (e.g. Wells and O’Brien, 1994b; Ingram and Robinson, 1996; Doig and Stanmore, 2012). In the Laidley and Cecil Plains sub-basins, the sedimentary thickness is poorly constrained due to the lack of wells penetrating the complete sequence of the basal stratigraphic units in the deepest part of the depositional centre. However, a 500 m thick sequence of the Walloon Coal Measures was intersected in a coal seam gas exploration well in the Laidley sub-basin (Silverdale 3; Pinder, 2008). This is comparable to the thickness of the Walloon Coal Measures in the Logan sub-basin.

The Paleozoic basement to the Clarence-Moreton Basin and older Mesozoic basins in south-east Queensland and north-east New South Wales consists of several fault-bounded blocks and exotic terranes of Paleozoic age. These basement blocks, which are part of the New England Orogen, restricted the deposition of sediments in the Clarence-Moreton Basin. The basement terranes are interpreted as part of an accretionary wedge (Korsch and Harrington, 1981; Day et al., 1983) composed of metasedimentary and metavolcanic rocks of Early Paleozoic to Permian, as well as granitoids that were emplaced in the region from the Late Permian to the Early Triassic (Donchak et al., 2007; Sommacal et al., 2008). They include the Yarraman and D’Aquiliar blocks (north), Texas Block (west), Coffs Harbour Block (south) and Beenleigh Block (east) (Figure 15).

Distribution of major faults and folds

The understanding on the nature of the tectonic setting and structural elements in the Clarence-Moreton Basin is still evolving. Recent seismic surveys as well as re-interpretation of older seismic surveys and new records from explorations bores will provide an opportunity to re-examine the tectonic processes that have led to the formation of the Clarence-Moreton Basin.

Murray et al. (1997) suggested that a strike-slip fault regime was initiated in the Late Carboniferous during a major tectonic plate reorganisation. Jell et al. (2013) indicate that oblique extension along major, dextral strike-slip basement faults was followed by thermal relaxation and subsidence over the transtensional rifts identified by Korsch et al. (1989). Strike-slip movement occurred along several major faults, controlling the magnitude of extension during the evolution of the Clarence-Moreton Basin, as well as older extensional Mesozoic basins such as the Esk Trough and the Ipswich Basin (Korsch et al., 1989).

Some of the most prominent structural features in the Clarence-Moreton Basin (Figure 15) which had a major influence on the development of depositional centres are: