The Clarence-Moreton bioregion population is difficult to estimate accurately, as it contains the fringes of major Queensland population centres of Brisbane, Ipswich, Logan and Toowoomba. Outside of these heavily populated fringes, the largest urban centres are Jimboomba (20,596 people), Grafton (19,070 people) and Lismore (16,156 people). The bioregion covers parts of at least ten local government areas, which in total have a total population of 713,000 (ABS, 2013a). The population within the boundaries of the Clarence-Moreton bioregion itself is estimated to be around 500,000 although this is not precise.

The Australian Land Use and Management classification v7 (ABARES, 2010) identifies six primary classes of land use. Figure 9 shows the relative proportions of these in the Clarence-Moreton bioregion. This breakdown highlights that more than half of the bioregion is either natural or relatively natural environments. Dryland agriculture and plantations is almost one third of the bioregion, while irrigation is a much smaller area, although it is far more intensive. Table 4 provides a finer level of breakdown of these primary classes, and is presented in the numbered order of the ABARES classification. The largest component of the Clarence-Moreton bioregion is used as grazing of modified pastures and native vegetation.

In the New South Wales part of the Clarence-Moreton bioregion, the area can be divided into three broad types of region (DECCW, 2010c), which is helpful in conceptualisation of river basin structure in this state: 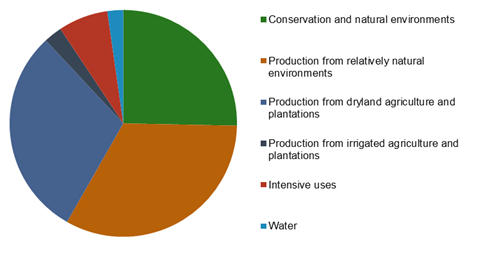 The New South Wales part of the Clarence-Moreton bioregion has no large dams. The largest reservoir is Toonumbar Dam in the upper Richmond river basin, which is a minor ungated dam, with a storage of 11,000 ML. Surface water balance reporting is available for the Richmond River, which shows levels of water diversions (net water diverted under basic rights and under access licences) of between 0.02 and 0.33% of inflows in this river basin during 2010–2013 period (Statewater, 2013).

As the Native Title Report 2008 (Aboriginal and Torres Strait Islander Social Justice Commissioner, 2009) highlights, sites of Aboriginal significance exist across Australia and include a range of ecosystems (e.g. wetlands) and animal and plant species – some of which have been formally recognised through legislation or legal claims. Even so, as a Traditional Owner and Indigenous Engagement Support Officer from SEQ catchments asserts, it is important to note that ‘Aboriginal cultural heritage is evidence of Aboriginal occupation of an area, both pre- and post-European settlement – and can be found anywhere in the landscape in both cities and regional areas’ (Hounsell, no date).