Characterisation of the water balance in the Namoi subregion is complicated by river regulation, the extensive practice of irrigated agriculture, groundwater flow across the subregion boundaries, interaction between the surface water and groundwater systems, and connectivity between aquifers. While it is relatively simple to measure surface water fluxes, quantifying the effect of the aforementioned influences on groundwater flows in the subregion is not possible with the available knowledge, and water managers must rely heavily on estimates and models. This section provides a qualitative discussion of the elements of the water balance, including volumetric estimates of terms where available.

The subregion is bounded by the surface water catchment boundaries of the Namoi River along the northern and southern boundaries, and to the east by the Hunter-Mooki Thrust Fault System, which cuts across the Namoi river basin. The long-term surface water inflow at the eastern subregion boundary depends on the yearly dam water release from Keepit Dam and flow in the Peel River. The mean annual flow in the Peel River at Carroll Gap is 248.7 GL (53.3 mm runoff) for 1923 to 2015, while the mean annual release from the Keepit Dam is 215.8 GL (1996 to 2015) (NSW DPI, n.d.a). The sum of flows through these gauges provides an estimate of the surface water inflow to the subregion. The average annual outflow from the subregion, measured at Walgett, is 645.2 GL (1999 to 2014) (NSW DPI, n.d.b).

The long-term mean annual rainfall and potential evapotranspiration across the Namoi subregion varies from 600 to 1100 mm and from 1200 to 1400 mm respectively, indicating a large annual water deficit in the subregion. The long-term mean annual rainfall and modelled runoff of the entire Namoi river basin are 633 mm and 24 mm, respectively (runoff ratio 3.8%, Scenario A) (CSIRO, 2007a). The mean annual flow of the Namoi River upstream of Walgett as given by the Budyko analysis (Budyko, 1974) is 2000 GL (47.8 mm runoff) for 1982 to 2010 (Figure 14), which is almost double the long-term modelled runoff. The mismatch between the Budyko and CSIRO (2007a) rainfall-runoff analyses can be partially explained by losses due to consumptive use, which are accounted for in the rainfall-runoff modelling, whereas the Budyko analysis is based on water balance calculations that take into account only the long-term rainfall and potential/actual evapotranspiration. The difference in calculation period used in the long-term modelling and Budyko analysis may also explain the discrepancy.

Although there are differences between the theoretical Budyko analysis and the modelled and observed flows and in the water balance calculations, the value of the Budyko analysis is the ability to compare the relative contribution of stream sections in a regional sense. The long-term average surface water flows estimated using water balance techniques of Budyko (1974) are presented in Figure 14. The figure shows that streamflow in the main Namoi River is much greater than in the individual tributaries, and provides a much greater dilution (in orders of magnitude) than the tributaries. 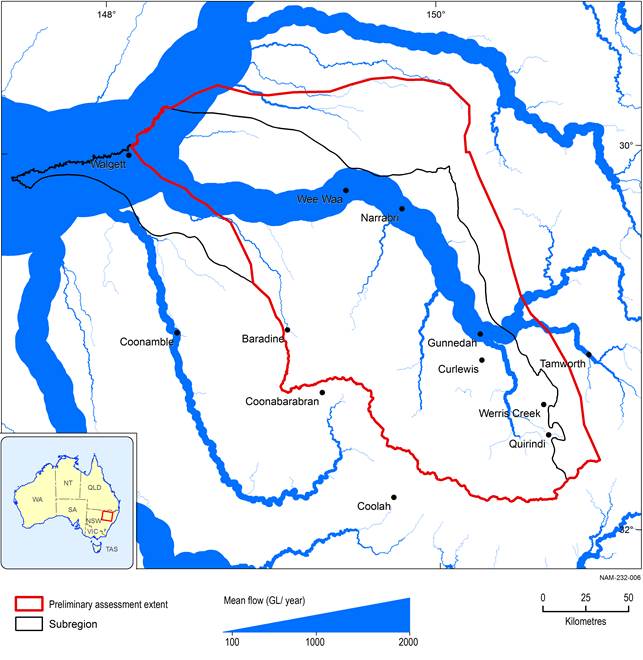 Long-term annual flow is estimated using the water balance technique of Budyko (1974), which does not consider any impounding or regulation of river flow.

Figure 15 shows a conceptual water balance diagram for the Upper Namoi alluvium groundwater sources. The diagram represents the modelled water balance for the 2012 to 2013 water year, used by NSW Government water managers (Burrell et al., 2014). The diagram is included here to provide an example of the range of inflows and outflows that need to be characterised to have a comprehensive understanding of the water balance of groundwater systems. All of the flux values must be estimated or modelled; even those terms that have a measureable component rely heavily on estimates. For example, pumped extraction volumes must include both licensed extractions, usually metered, and stock and domestic water extraction, which is generally not metered, and can constitute a significant proportion (between 0.8% and 98%; Peña-Arancibia et al., 2016) of the sustainable diversion limit in each groundwater source.

Figure 15 shows that inflow to groundwater sources is via recharge from rainfall and irrigation. Groundwater outflows include evapotranspiration and pumped extractions. River recharge, or more specifically river/groundwater connections, and inter-aquifer connectivity provide mechanisms for water to flow between systems. 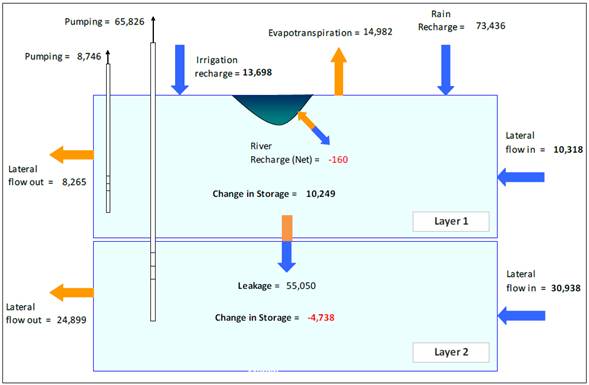 Upper Namoi groundwater combined sources physical flow budget 2012 to 2013. Layer 1 and Layer 2 in this diagram refer to modelled layers in the alluvial water source. All figures stated are in megalitres (ML).

Rainfall recharge in the western part of the Namoi subregion is considered to be low. The Lower Namoi river basin groundwater model indicates that diffuse recharge from rainfall is a minor recharge source (Merrick, 2001). Groundwater level monitoring data revealed that recharge is less than 0.6% of annual rainfall during very wet years and is limited to localised areas of the plains. Considering the uncertainties involved, recharge is considered very small or negligible in the Lower Namoi (Timms et al., 2012).

Rainfall recharge to deeper groundwater sources generally occurs in areas of geological outcrop. The GAB units in the west of the subregion are recharged primarily through the southern and eastern recharge beds, shown in Figure 16, via direct rainfall infiltration into outcrops or indirect leakage from streams or overlying units. 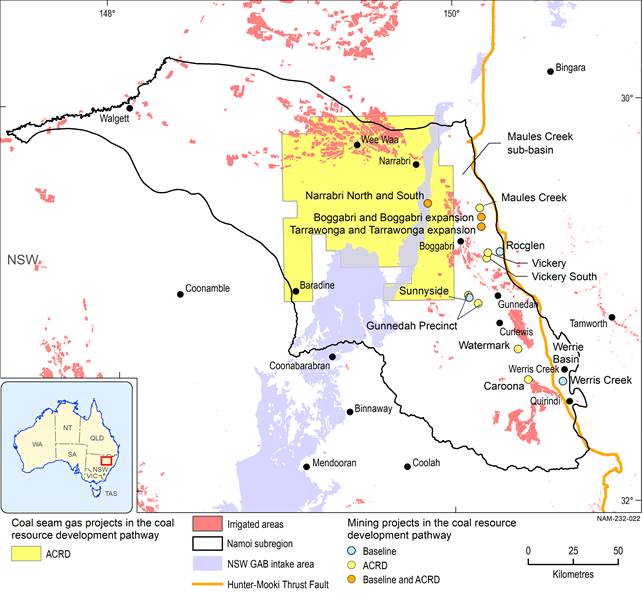 Groundwater recharge as a result of irrigation may represent a significant component of recharge in some areas, however estimates of groundwater recharge from irrigation vary considerably. Figure 16 shows the area of irrigated agriculture in the Namoi subregion, based on 2014 land use mapping (Australian Bureau of Agricultural and Resource Economics and Sciences, Dataset 5).

Studies undertaken near Narrabri showed irrigation drainage to groundwater ranged from approximately 30 to 50 mm/year during the cotton irrigation season, was 23 mm/year under fallow conditions and was negligible under non-irrigated wheat (Ringrose-Voase and Nadelko, 2011). Other studies have provided complementary findings, however more work is needed to understand if this water migrates laterally, returns to the surface water flows or moves downwards to recharge deeper aquifers (see companion product 1.1 for the Namoi subregion (Welsh et al., 2014)). The main irrigation areas in the Namoi subregion are given in companion product 2.1-2.2 (Aryal et al., 2018a).

The streams on the Lower Namoi alluvial plain are in hydraulic connection with the Narrabri Formation, the uppermost alluvial layer. At the eastern and western margins of the plain, the rivers are directly linked with the watertable. An unsaturated zone occurs between these areas, where the watertable lies well below the streams. Surface water recharges the underlying aquifer whenever streamflow persists.

It is highly likely that water in the Pilliga Sandstone aquifer is providing baseflow to the Namoi River at the eastern extent of the outcropping GAB units via the Cenozoic alluvium. The river model of the Lower Namoi used in groundwater management plans has an average inflow of 8.3 GL/year from the GAB (Herczeg, 2008).

As a result of this surface water – groundwater connectivity, historical groundwater use has impacted on streamflow in the Namoi River and its tributaries. The Lower Namoi River has changed from a substantially gaining river prior to agricultural development to a largely losing river. CSIRO (2007b) estimated that the total average impact on tributary streamflow by 2010 would be a loss to groundwater of 19 GL/year more than that included in the river planning models examined.

Close to the margins of the GAB, paleochannels of overlying alluvium can be incised into aquifers such as the Pilliga Sandstone, resulting in upward leakage where the paleochannel has eroded the low permeability saprolite. The location and extent of contact between the alluvium and the Pilliga Sandstone is poorly understood, but is considered to be highly variable across the region (Ransley et al., 2012b). The contribution of the GAB aquifers to the alluvium in the water balance of the Lower Namoi model has previously been calculated as approximately 3.8 m3/day/km2 (Herczeg, 2008). It is estimated that there are approximately 400 km2 of paleochannels.

The hydraulic connectivity between the GAB and underlying Gunnedah Basin appears to be variable but limited across the Namoi subregion, with an area in the northern part of the subregion providing the most likely area of connectivity (CSIRO, 2012).

The degree of connectivity between the alluvium, GAB and Gunnedah Basin aquifers is a key component for determining any impacts on water resources within the subregion due to coal resource development. However, information and data on connectivity are very limited and represent a significant knowledge gap; this issue is addressed further in Section 2.3.2.5.