A total of 26 sociocultural assets were sourced from the Australian Heritage Database (Department of the Environment, 2015; Bioregional Assessment Programme, Dataset 1), comprising 24 assets from the Register of the National Estate (RNE) and 2 assets from the National Heritage List (NHL). Because of the dearth of asset descriptions to support accurate assessments of water dependence, the precautionary principle was applied in all cases. Consequently, all 26 assets were considered to be potentially water dependent and were included in the water-dependent asset register. No additional sociocultural assets were nominated at the Cooper subregion asset workshops in Brisbane in October 2014, or in Charleville and Quilpie in February 2015.

Table 12 shows the breakdown of water-dependent sociocultural assets by dataset, subgroup and class. The geographic locations of the assets are shown in Figure 21. There are 24 assets in the ‘Cultural’ subgroup and 2 assets in the ‘Social’ subgroup. Nine of the assets from the RNE are classed as Indigenous sites. On all sides of the Cooper preliminary assessment extent (PAE), large sociocultural assets intersect with only a small part of the PAE and extend far beyond the boundaries of the PAE. During subsequent stages of the Bioregional Assessment Technical Programme, impact will only be assessed for those parts of such assets that lie within the PAE. 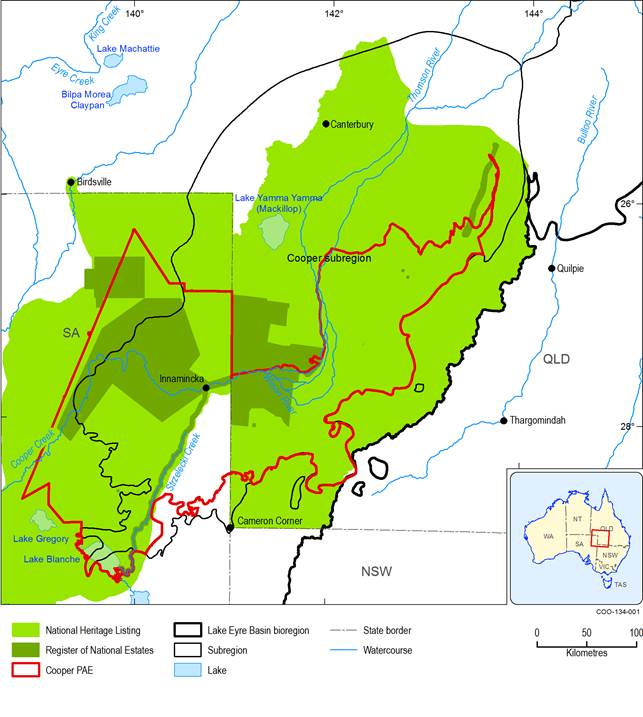 The two assets from NHL (the Birdsville and Strzelecki Tracks Area and the Cooper Creek Sub-Catchment) are both areas that have natural values and are partly or entirely protected under national and/or state conservation legislation. Large parts of these sociocultural assets were also nominated as ecological assets. All examples of this type of asset depend on a combination of surface water and groundwater – at least in part.

Three of the 13 assets sourced from the RNE that are classed as heritage sites are also natural areas that have federal or state-level conservation designations (Coongie Lakes, Cooper Creek Floodplain and the Nappa Merri area). They are also nominated as assets from other databases that were classified as containing ecological assets and depend on surface water, at least in part.

The remaining assets sourced from the RNE and classed as heritage sites are historical places. Some of these assets are associated with the 1860 to 1861 expedition by Robert O'Hara Burke and William John Wills (e.g. the Burke and Wills National Heritage Place, the Dig Tree Reserve, and the Wills Monument and Blazed Tree Historic Registered Place). Some of these assets lie within floodplains of rivers and creek, and they were able to be assessed reliably as water-dependent using the remotely sensed data. However, for other assets that are historical places, there is too little information to assess water dependence with any accuracy, and thus the precautionary principle was invoked to identify all as potentially water dependent, pending additional information.

The water-dependent asset register includes nine Indigenous sites sourced from the RNE. Other than the name and location of the asset, very little information was available to assess water dependence. Hercus (2009) described the places in northern SA that are of significance to local Indigenous people and are associated with waterholes and rockholes. On the basis of this information and the secondary analyses through intersections with remotely sensed data sources, in addition to the precautionary principle in each case, these Indigenous sites were assessed as likely or possibly dependent on surface water and/or groundwater.

Summary and download
1.3 Water-dependent asset register for the Cooper subregion