Sociocultural assets were sourced from the Australian Heritage Database (Department of Environment, 2014; Australian Government Department of the Environment, Dataset 2, Dataset 3, Dataset 4, Dataset 5) and were classified into heritage, Indigenous and recreational sites (Table 11). The areas of some sites overlapped. For example, some of the Indigenous sites were also listed as recreational sites (e.g. Tucki Tucki Bora Ground and Tucki Tucki Nature Reserve). Figure 15 displays the sociocultural assets in the PAE of the Clarence-Moreton bioregion.

Most heritage sites were not considered water dependent as they were listed historical buildings. While other 1.3 reports from different bioregions (e.g. (O’Grady et al., 2015; Mitchell et al., 2015)) included historical buildings that are situated in the maximum flood extent, this was not possible for the Clarence-Moreton bioregion as the available floodplain extent in the PAE did not overlap in area with any historical buildings. In this case, any historical buildings within close vicinity (less than 100 m) of a surface water feature were also checked using available high resolution imagery to see where the asset was situated and if physical barriers, such as hills, surrounded the asset to impede any overbank flows. If not, the asset was included in the register. The 15 heritage sites that were considered water dependent were large areas of natural environment containing surface water features or groundwater-dependent vegetation (e.g. military training areas, such as Canungra Land Warfare Centre) or were on a floodplain (e.g. Archerfield Airport). There was one World Heritage Site, the Gondwana Rainforests of Australia World Heritage Areas, which was considered water dependent as surface water features were prominent in these areas.

The recreational areas were mainly national parks, reserves and environmental parks. The assets were determined to be water dependent if they contained surface water features or groundwater-dependent ecosystems. 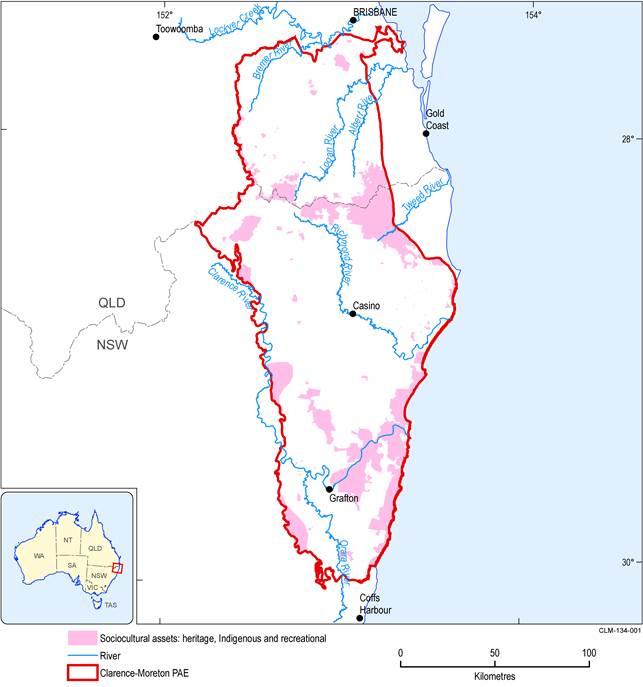 Summary and download
1.3 Water-dependent asset register for the Clarence-Moreton bioregion