Most of the numerous coal seams present in the Gloucester Basin (a geological basin which underlies the Gloucester subregion) are contained within the Craven and Avon subgroups of the Gloucester Coal Measures, along with a few seams in Dewrang Group and Alum Mountain Volcanic (Figure 3 and Figure 4). The coals were deposited during the Permian Period with deposition of the Gloucester Coal Measures ending towards the Upper Permian (260 to 250 million years ago) (Hughes, 1995, p. 423). Hughes (1995, p. 424) recognised over 50 individual coal seams in the basin with only 20 that have been named and at least five that appear to be associated with some depositional hiatus. The coals are thicker and of better quality on the eastern margins of the Gloucester Basin. They are classified as medium to high volatile bituminous coals, with generally high raw ash contents, high specific energy and medium to high volatile matter contents. Apart from seams associated with marine transgressions, the sulfur contents of these coals are generally less than 0.7% (Hughes, 1995, p. 424–425). For washed coals the vitrinite contents generally range from 65 to 75%, except for the Bowens Road Coal Member which is predominantly dull coal. Vertical vitrinite reflectance gradients are around 0.4% per 100 m in the north, 0.06% per 100 m in the central region and 0.04% per 100 m along the western margin of the basin, and lateral variations in rank have been noted (Hughes, 1995, p. 425). Ranges for the coal properties are provided in Hughes (1995, p. 425). Reserves of 83.6 Mt and in situ resources of 357.9 Mt of coal have been reported for the Gloucester Basin (Gloucester Coal Ltd, 2012; R.W. Corkery and Co. Pty. Limited, 2012).

The Quaternary alluvium is not shown. Location of the cross-section ‘A–A’ within the Gloucester Basin is shown in Figure 22 of companion product 1.1.3 for the Gloucester subregion (McVicar et al., 2014). Source: Roberts et al. (1991). Note that this figure is not covered by a Creative Commons Attribution licence. It has been reproduced with the permission of NSW Trade & Investment. 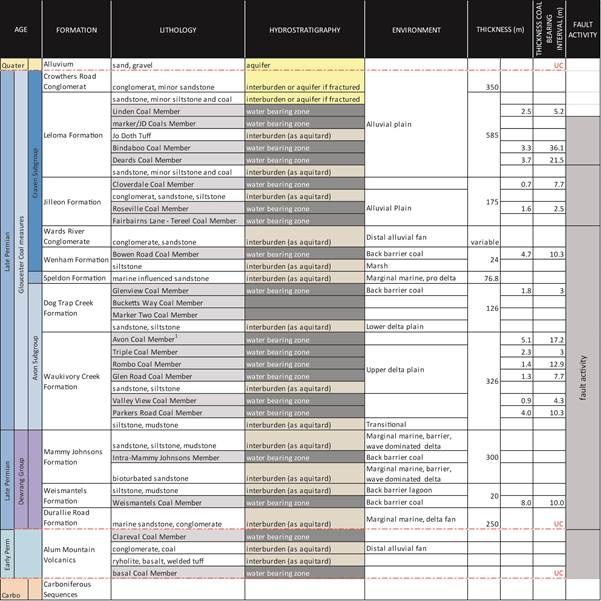