Riparian ecosystems provide important connections between terrestrial and aquatic habitats and include parts of key ecological assets such as the Ramsar-listed Coongie Lakes, wetlands listed in the Directory of important wetlands in Australia (DIWA) and the Channel Country Strategic Environmental Area, as well as plants and animals of cultural significance for Indigenous peoples. Riparian vegetation is relatively undisturbed by existing development.

Riparian ecosystems include plants and animals whose composition can be directly or indirectly attributed to the presence of rivers and streams (Kauffman and Krueger, 1984). They are important connections between terrestrial and aquatic habitats and are an important component and driver of aquatic ecosystems, controlling and regulating a range of biological and physical processes within the riparian environment (Capon et al., 2016). Riparian communities provide a range of ecosystem services including the inputs of organic materials into the riparian system, regulation of the riverine microclimate and provision of habitat to a range of species (Sheldon et al., 2010).

The spatial extent of the riparian vegetation extent and condition endpoint in the Cooper GBA region is 5,626 km2 (about 4%), of which about one-third overlies areas that are prospective for the development of unconventional gas resources ( Figure 12 ). Riparian vegetation in the Cooper GBA region is relatively undisturbed (1.3%) , with seismic surveys (24 km2 ) accounting for 32% of total disturbance (75 km2 ) (Geological and Bioregional Assessment Program, 2021m).

The capacity to provide a range of cultural (Constable et al., 2015) and economic services (Hawden et al., 2006) is tightly coupled to the extent and condition of the riparian vegetation along Cooper Creek. For Indigenous peoples, riparian ecosystems are culturally significant, containing a range of spiritual, economic and ecological values (Constable et al., 2015). Important ecological assets include DIWA-listed wetlands (for example, Cooper Creek – Wilson River junction) and the Ramsar-listed Coongie Lakes, which is also protected under the EPBC Act. There are also significant cultural assets associated with this endpoint, including the Burke, Wills, King and Yandruwandha National Heritage Place and a range of Indigenous values that include important species (for example, Eucalyptus coolabah) and places (for example, Strzelecki Creek) (refer to the DIWA wetland condition and riparian vegetation extent and condition endpoints).

Riparian vegetation in the Cooper GBA region is relatively undisturbed. There is high confidence that compliance with existing protections, including legislated, ‘no-go’, areas, and industry controls can minimise future direct impacts on riparian vegetation. However, indirect impacts from unconventional gas resource development are of ‘potential concern’ in over 30% of riparian areas. Stressors such as accidental release of chemicals, invasive plants and predators could spread beyond directly affected areas and exacerbate existing environmental drivers, such as invasive herbivores and altered fire regimes.

Development of linear infrastructure, such as roads and pipelines, has direct impacts on habitat, but can also facilitate the spread of invasive species that, once established, are difficult to control. Riparian vegetation is also sensitive to fire (Queensland Herbarium, 2018b), and requires long periods without burning to provide the necessary structural complexity (for example, hollow formation). Potential impacts that could spread outside of the development area include increased competition and predation, altered fire regimes, or habitat degradation, fragmentation and loss. These impacts are of ‘potential concern’ in 33% of riparian areas (refer to the dust generation , invasive plants and invasive predators node descriptions).

Bank instability and erosion can impact on water quality, as well as channel form and geometry, which influence flow and sediment transport dynamics (Castro-Bolinaga and Fox, 2018). Bank instability and erosion is mainly associated with vegetation removal for civil construction activities and is of ‘potential concern’ in up to 13% of the riparian vegetation extent and condition, Channel Country SEA condition and DIWA wetland condition endpoint areas. Potential impacts could be exacerbated by invasive herbivores such as goats, rabbits, horses and pigs, which also contribute to bank instability via removal of vegetation and digging or pulverising soils (Marshall et al., 2013; Desert Channels Queensland, 2013; Schmarr et al., 2013; Department of Environment and Science (Qld), 2013). Impacts are likely to be concentrated around permanent water sources, including river channels and waterholes (McBurnie et al., 2015; Box et al., 2016; Box et al., 2019).

There is high confidence in available mitigation strategies as infrastructure development is not permitted under state regulations and legislation in many sensitive riparian areas in Queensland (Department of Environment and Science (Qld), 2016; Department of Environment‚ Water and Natural Resources (SA), 2014) and South Australia (South Australian Government Gazette, 2003; South Australian Arid Lands Natural Resources Management Board, 2017b). Integration and coordination of industry management plans and mitigation strategies with regional planning is critical for effective management of indirect impacts on riparian areas associated with invasive plants, predators and fire.

Key threats to waterholes along Cooper Creek are related to indirect impacts, such as soil and surface water contamination, habitat degradation, fragmentation and loss by invasive herbivores and livestock grazing, invasive plants and altered fire regimes. These indirect impacts could degrade up to 36% of waterhole habitats. Confidence in existing avoidance and mitigation strategies prescribed in state-based regulations, and relevant environmental management plans is high.

Waterholes are defined as enlarged segments of the river channel that hold water after flow has ceased. They typically form in channels where flow is concentrated and constricted and are maintained by river flows that scour the riverbed of sediments (Silcock, 2009). Waterholes include permanent and semi-permanent waterholes (those that contain water more than 70% of the time) (Butcher and Hale, 2011; Silcock, 2009) identified using Water Observations from Space (WOfS) images over a 20-year time-series (Geoscience Australia, 2018) at the resolution of the 500 m grid. This includes 334 waterholes that are inundated more than 70% of the time in the Cooper GBA region.

In the arid environment of the Cooper GBA region, permanent waterholes are important habitats and form refuge for fauna and flora during dry times (Hamilton et al., 2005; Carini et al., 2006; Silcock, 2009). Many waterholes have customary, spiritual and economic values to Traditional Owners and have been part of traditional trade routes for tens of thousands of years (Constable et al., 2015). The importance of permanent waterholes means that understanding the source of the water that sustains them is central to understanding any potential impacts from changes due to unconventional gas resource development ( Box 7 ).

The Cooper GBA region contains over 3,000 waterholes. Water level observations and satellite image analysis identified 48 waterholes that are inundated 90% of the time and overlie areas that are prospective for the development of unconventional gas resources ( Figure 13 ). Of these 48 wetlands, 17 were sampled for depth to groundwater, water chemistry and environmental tracers. Water level data indicate the 17 waterholes are perched above the regional watertable. The chemistry and tracer data show they are surface water fed and provide conduits for ephemeral groundwater recharge. Similarly, water balance estimates at Cullyamurra and Nappa Merrie waterholes, showed no detectable groundwater inputs.

The investigations found that surface water is a source of periodic freshwater recharge that sustains fringing riparian vegetation. In other words, groundwater drawdown in the regional unconfined aquifers hosted by Cenozoic and Winton-Mackunda sediments will not impact on groundwater-dependent vegetation growing on the floodplains of Cooper Creek.

These key threats are represented in the causal network by over 100 pathways from development activities to the waterhole condition endpoint (refer to the bank instability and erosion , channel flow , competition and predation , freshwater lens recharge , scouring , sedimentation , soil contamination and surface water contamination node descriptions). Indirect impacts are of ‘potential concern’ in 36% of waterhole habitats (refer to the accidental release , invasive plants and invasive predators node descriptions). Confidence in existing avoidance and mitigation strategies prescribed in state-based regulations (Government of South Australia, 2015; Department of Environment and Science (Qld), 2016) and under Queensland’s Biosecurity Act 2014 and the Landscape South Australia Act 2019, and relevant environmental management plans (Santos, 2015) is high. 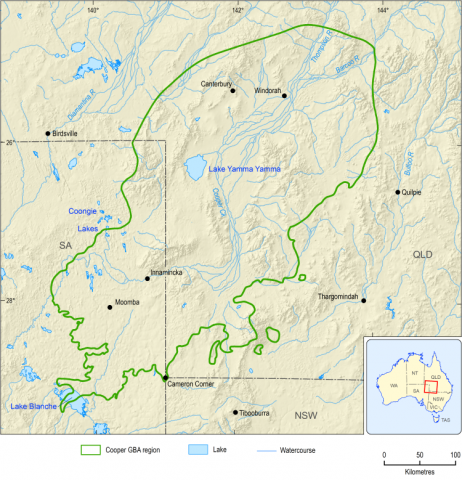