The Surat and Clarence-Moreton geological basins are extensively overlain by a relatively thin veneer of younger Cenozoic units comprising unconsolidated alluvial deposits associated with both existing and paleo drainage lines. Additionally, volcanic rocks of the Main Range Volcanics, predominantly basalt, are present along the eastern margin of the subregion and form a discontinuous south-east oriented band extending from south-east of Toowoomba to north-east of Dalby. Portions of the Main Range Volcanics are overlain by younger alluvial sediments in some areas. The coal-bearing units considered within the subregion occur within the Walloon Coal Measures, which is a laterally continuous unit occurring within both the Surat and Clarence-Moreton basins. Figure 7 is a simplified cross-section of the subregion showing the relationship between the geological basins.

The Helidon Sandstone is a superseded stratigraphic name. It has been replaced by the Woogaroo Subgroup.

Surficial geology affects important water flow pathways, including groundwater discharge, deep soil drainage and groundwater recharge. Groundwater discharge occurs when a hydraulic gradient exists from an unconfined aquifer into a watercourse or the atmosphere, via the unsaturated zone. Groundwater recharge occurs via different mechanisms, including diffuse rainfall recharge and surface water recharge. Diffuse rainfall recharge occurs where stratigraphic units are exposed at the surface, termed ‘aquifer outcrop areas’ or ‘intake beds’ in the GAB. High spatial variability in recharge and discharge rates are due to the variable hydraulic properties of the sediments and rocks. Figure 8 shows a simplified representation of surface geology in the Maranoa-Balonne-Condamine subregion. Much of the subregion is covered by thin alluvial deposits, with Main Range Volcanics to the east and Kumbarilla beds to the north of the subregion. Figure 8 also shows the location of the cross-sections used to visualise the deeper aquifers in the vicinity of the two additional coal resource development (ACRD) open-cut coal mines, New Acland Coal Mine and The Range (discussed in Section 2.3.5). 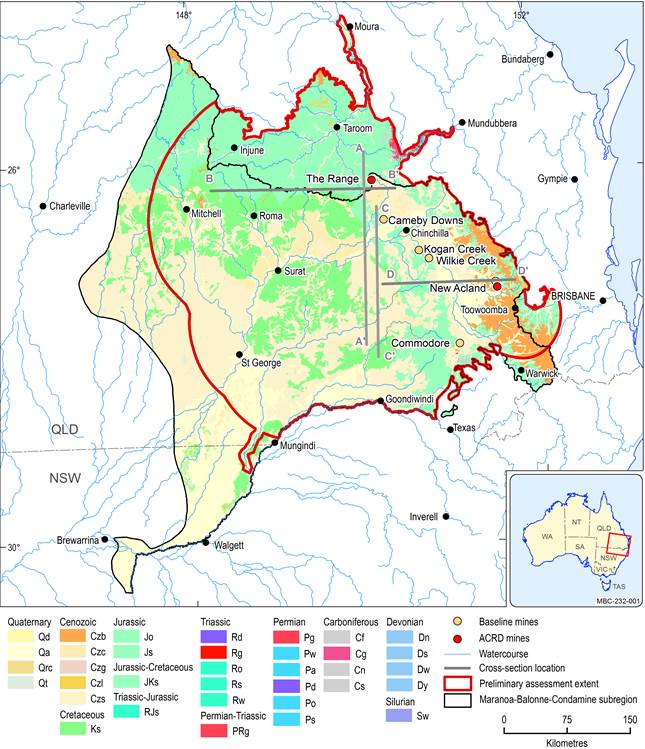 Geological names for each rock unit are described by Geoscience Australia (2016).