Requirements for water licences are triggered by the rules defined under water resource plans for groundwater management areas and sub-artesian areas in Queensland. A water licence is required if the:

The circumstances in which a water license becomes essential is explained in the subsequent sections.

For the bioregional assessment of the Maranoa-Balonne-Condamine subregion, stock, domestic and other commercial uses of water are accounted for as per the entitlements in the relevant water resource plans (WRPs) for the relevant management areas. Water use by the coal seam gas (CSG) industry is accounted for based on data supplied by CSG companies to OGIA. Groundwater accounts for the Surat CMA are broadly classified as water use for non‑petroleum and non-CSG activities and water use for petroleum and CSG activities.

Licensing provisions required for water use are administered by the Queensland Department of Natural Resources and Mines (DNRM). DNRM holds the database containing information about water licences, authorised volumetric limits, details of bores and recorded water use.

Estimated water use for bores with a volumetric entitlement is the maximum authorised volume as per the water licence. However, actual water use may be less than this. OGIA estimated the water use for the stock and domestic bores by following the methodology used in the GAB water resource planning process and the Murray–Darling Basin planning process (QWC, 2012). A number of criteria were considered by this methodology in estimating the water use. These include considerations of the aquifer in which the bore is screened, property size, whether the property is rural or urban, and whether groundwater is the primary water source. Estimated annual non‑petroleum and non-CSG groundwater usage per bore for the Surat CMA (Bioregional Assessment Programme, Dataset 2) is shown in Figure 7. 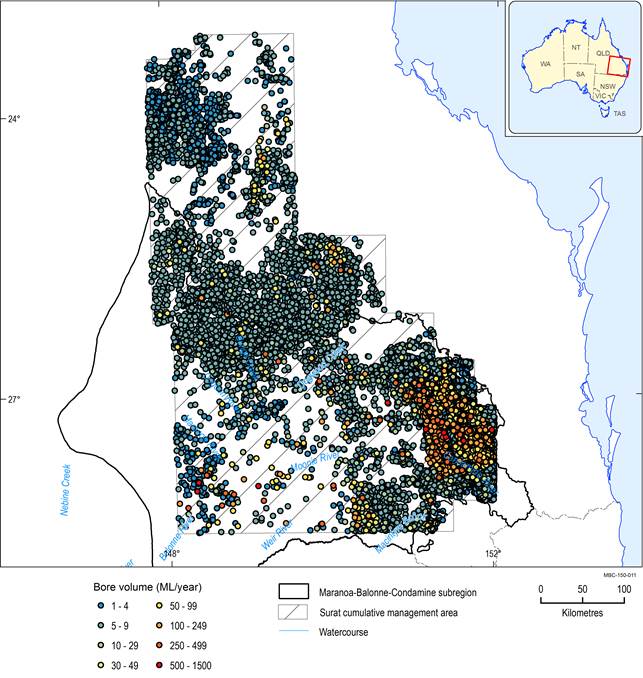 Data: Bioregional Assessment Programme (Dataset 2), Department of Environment and Heritage Protection (Dataset 5)The estimated water use was based on the entitlement for majority of the bores. Where entitlement is not available (e.g. Volcanics), water use was estimated based on other criteria including aquifer type, property type etc. as mentioned earlier.

Based on this approach, OGIA estimated the total non-petroleum and non-CSG water extraction in the Surat CMA as 215 GL/year from about 21,200 water bores (QWC, 2012; Office of Groundwater Impact Assessment, Dataset 3). This is comprised of 85 GL/year from GAB aquifers and 130 GL/year from other aquifers. Table 3 gives estimates of the number of bores and Table 4 of their extraction rates in GAB and non-GAB aquifers.

Figure 8 shows the distribution of groundwater bores indicating the aquifer from which water is extracted.

bThis is estimated annual use based on entitlements administered by DNRM. The total underlying entitlement is approximately 99 GL/year. 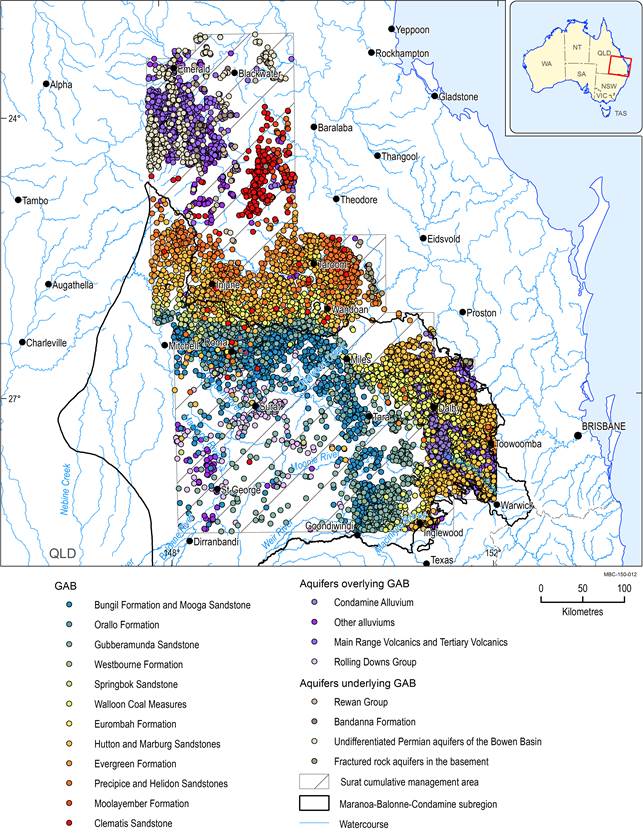 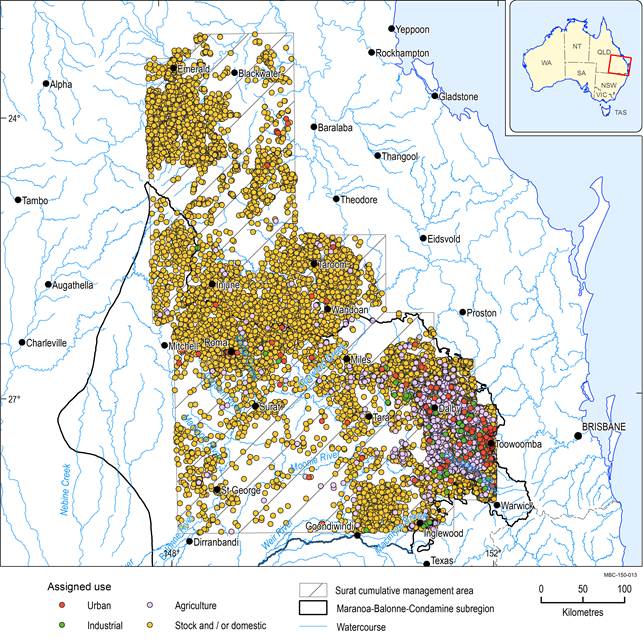 Large amounts of water are extracted from CSG production wells to depressurise coal seams. Groundwater extraction for CSG production in the Surat CMA commenced in 1995. The earliest operations focused on CSG development in the Bowen Basin at the Fairview Field operated by Santos. Groundwater extraction for CSG development commenced in the Surat Basin in 2002.

The volumes of water extracted by petroleum and gas tenure holders including CSG explorers are reported to DNRM. Based on this information, as of December 2013 there were 1534 CSG wells in the Surat CMA (Queensland Government, Dataset 4). Table 5 gives the account of CSG water production from the Surat CMA over the period 2005 to 2013. Clearly, there is an increasing trend in the number of wells over the years, however the half-yearly volume of water produced over the past 5 years was relatively consistent.

Further information on the WRPs and WSPs is available in Section 1.1.4.4 in the companion product 1.1 for the Maranoa-Balonne-Condamine subregion (Welsh et al., 2014). 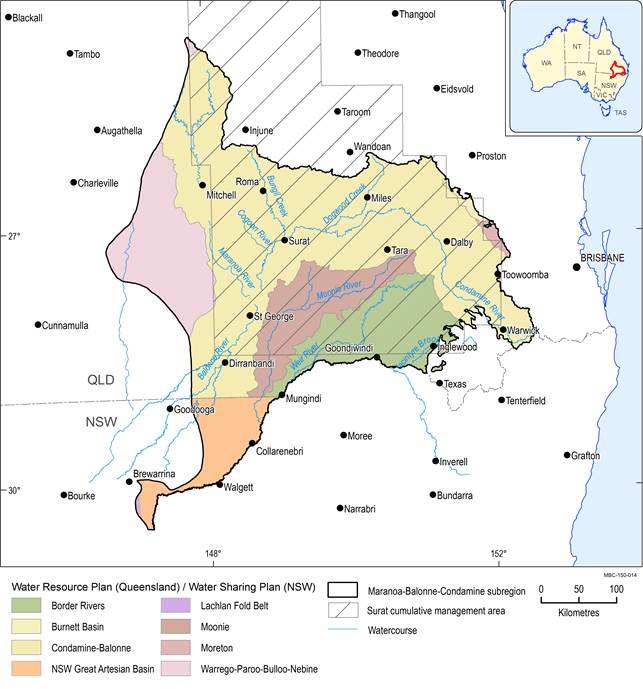 In addition, the groundwater systems within the subregion are represented in the Basin Plan for the Murray–Darling Basin as sustainable diversion limits (SDLs). This includes all or part of the Condamine-Balonne, Moonie, New South Wales Border Rivers alluvium, Queensland Border Rivers, and Warrego-Paroo-Nebine groundwater water resource plan areas. The Basin Plan prescribes current limits on extraction based on existing planning regimes as baseline diversion limits (BDL) and the future extraction limits as SDLs. BDLs and SDLs of the groundwater systems are described in Section 1.1.4.4 of the companion product 1.1 for the Maranoa-Balonne-Condamine subregion (Welsh et al., 2014).

Information on stratigraphy and screened intervals were only partially available for estimating groundwater use per aquifer. This information is very important for estimating the impacts as the stresses in different aquifers can have different impacts and hence knowing the aquifers that are actually stressed by the groundwater extraction is important to accurately predict the impacts.

Where actual groundwater use was not recorded, licensed volume was used in estimating groundwater use. Better estimates could be obtained if actual usage data become available.

Summary and download
1.5 Current water accounts and water quality for the Maranoa-Balonne-Condamine subregion