Across most water resources in NSW, a system of water licences and allocations is used to manage the take of water from water sources. Management of water resources is provided for under NSW’s Water Management Act 2000 via WSPs, and is intended to ensure that water resources are shared sustainably between multiple users, including the environment. It largely supersedes NSW’s Water Act 1912, which is being progressively phased out as new WSPs are developed, but still applies in areas without plans and some provisions are still in force. Licensed entitlements provide an indication of economic demand on a water resource and may be constrained by a long-term average annual extraction limit (LTAAEL) or diversion limit on the resource. The maximum permissible take under a licence is typically greater than what is actually taken in any given year.

Allocations are used to limit extractions held under entitlement from the regulated river in response to the availability of water in the water supply storages. In times of good water availability, allocations for all classes of licence will be 100% (or more), meaning that the licensee is entitled to extract the maximum permitted under the licence. When water availability is low, a licence holder may be permitted to extract a volume less than the full entitlement. Thus annual allocations provide an indication of the stress on water resources over time.

Supplementary water licences are issued in regulated reaches, which permit licence holders to access storm flows that cannot be controlled in storages and is not required to meet environmental flow or other high priority right holder demands. Supplementary water is essentially surplus to the regulated requirements and is available opportunistically (i.e. when a period of supplementary access is announced by DPI Water).

The Hunter Regulated River water source is one of the most heavily allocated with close to 246 GL/year of licensed entitlements. However, the Water Sharing Plan for the Hunter Regulated River Water Source 2003 sets a long-term average annual extraction limit (LTAAEL) of 217 GL/year on extractions, including extractions under supplementary water licences (estimated from modelling to be 49 GL/year on average). Thus the current volume of licensed entitlements exceeds the LTAAEL, indicating a fully allocated system. Acquiring a perpetual water use licence and/or an annual allocation water can only occur through the water market.

Water licences are typically issued for a specified purpose. Table 9 summarises water entitlements by licence type/purpose for all water sources, as well as just the Hunter Regulated River water source, with the same caveats applying as for Table 8. Urban and industrial uses dominate water use in the Hunter subregion. This is reflected in the volumes licensed to major utilities, for urban water supply and power generation and to local water utilities, which amount to about 57% of licensed entitlements (including supplementary water). General security licences account for about 18% of licences on issue with another 16% licensed to users in the unregulated water sources. High security licences represent a relatively small component of the entitlement pool, but about 55% of these are held by mining companies. Mining companies also hold about 26% of general security licences and a small proportion (4%) of supplementary licences (NSW Department of Primary Industries, 2014), in all about 47 GL/year of entitlements. Agricultural water uses would account for much of the general security water licences. 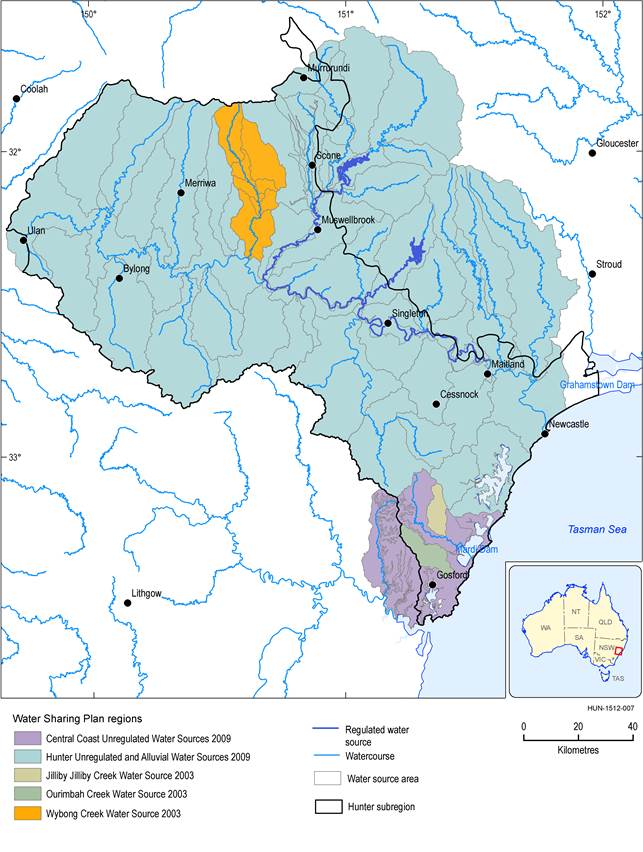 A water entitlement is a right conferred by law to hold or take water from a water resource.

Licence numbers and entitlement volumes are current at July 2015.

Figure 6 summarises annual allocations in the Hunter Regulated River water source from 2004-05 to 2011-12 (similar water allocations were made for the Paterson Regulated River water source also (NSW Office of Water, Dataset 11)). Allocations are differentiated by category of water access licence: 'Major utility' refers to major town water supply and power generation licence holders (e.g. Hunter Water Corporation; Macquarie Generation); 'Local water utility' refers to smaller town water supply providers (e.g. local councils); 'General security' and 'High security' licences pertain to regulated river reaches, with high security licence holders having greater surety of a full allocation in dry years than those holding a general allocation licence. It can be seen that during this period, 'Domestic and stock', 'Local water utility' and 'Major utility' licence holders were allocated 100% of their entitlements (NSW Office of Water, Dataset 10). 'High security' and 'General security' licence holders received 100% of entitlements each water year except for2006-07 when high security allocations fell to 92%, and general security allocations to 35%, of entitlements due to the severest drought in the last 20 years. At this time Glenbawn Dam and Glennies Creek Dam were at 32 and 34% of their capacity, respectively, their lowest levels in the 20 year period (Table 3 and Figure 4). 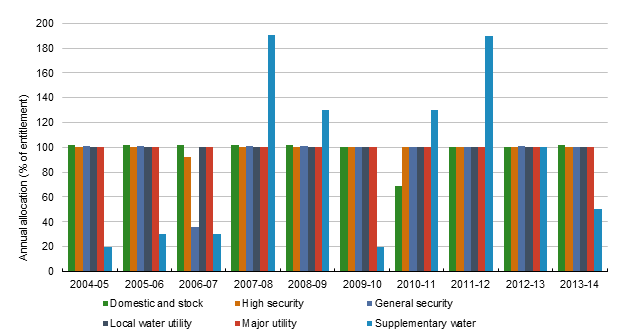