Core Energy Group (2013) identified total prospective CSG resources for the Cooper-Eromanga region of 38,852 petajoules (PJ), as at 31 December 2012. This estimate does not identify if these resources occur in conjunction with other hydrocarbon resources, or occur as a CSG-only resource, nor are data available at the tenement level. There is one identified CSG resource (as per the Australian National Energy Resources Classification Scheme) reported in the subregion.

Strike Energy has reported an 8893 to 23,317 PJ[5] prospective resource (as per the Society of Petroleum Engineers Petroleum Resource Management System) in its Southern Cooper Basin Gas Project (a joint venture with Australian Gasfields Ltd) in SA, of which 75% is estimated to be associated with Patchawarra Formation coal (Strike Energy Limited, 2014b). This resource includes a 2C CSG resource estimate of 168.5 PJ[6] for the Klebb-1 Patchawarra Vu Upper and Le Chiffre-1 Patchawarra Vu Upper and Vu Lower zones within PEL 96 (Strike Energy Limited, 2015a). Current testing is underway to improve resource definition, with the aim of defining CSG reserves, and assessing the viability for full-scale production.

Previous exploration in SA by AGL Energy Limited investigated CSG potential in the Winton Formation with three wells drilled in 2009 (Merninie-1, Merninie-2 and Merninie-3). Due to the lack of reservoir, low gas contents and high levels of gas undersaturation, the ‘Innamincka Dome CSG Prospect’ was deemed uncommercial (AGL Energy Limited, 2010).

The southern margin of the Cooper Basin in SA has been the main focus of CSG exploration, including in the Weena and Milpera troughs. These are currently covered by Petroleum Exploration Licence (PEL) 94 and PEL 96. Additional exploration for CSG has occurred in the Battunga Trough, in PEL 95. Strike Energy and Beach Energy are involved in pre-development appraisal operations in PEL 94, 95 and 96. Strike Energy is currently undertaking production test operations of CSG-only plays at Klebb-1, Klebb-2 and Klebb-3, and Le Chiffre-1 in PEL 96 (Strike Energy Limited, 2014b). The location of these operations is shown in Figure 9.

CSG exploration wells (Dartmoor-1 (drilled by Santos Limited in 2002), Pebble Hill-1 (drilled by Bow Energy Ltd in 2009) and Hobson-1 (drilled by Bow Energy in 2009)) have been drilled in the Queensland part of the subregion, however no further CSG activity resulted from these programs. Dartmoor-1 encountered a thick coal seam in the Epsilon Formation, however, subsequent testing was unsuccessful (Santos, 2002). Pebble Hill-1 and Hobson-1 targeted CSG in the Winton Formation; however, results did not warrant further CSG exploration (Bow Energy Ltd, 2010). Exploration in Authority to Prospect (ATP) 940 by Drillsearch since 2007 has focused on deep, basin centred and tight gas, which includes deep CSG as part of a composite gas system. Exploration on the northern and western flanks of the Patchawarra Trough has focused on composite unconventional gas targets, including gas associated with deep coal seams of the Patchawarra Formation (Drillsearch Energy Limited, 2015a, 2015b; Santos, 2015).

All other gas exploration targets in the Cooper subregion are part of composite gas plays, or conventional oil and gas resources. Figure 10 shows the distribution of petroleum wells in the subregion, and indicates oil and gas production wells, and wells with hydrocarbon shows. Although composite targets may contain some (generally unspecified) component of CSG, they are associated with other unconventional gas resource types, including basin-centred, or tight, gas and shale gas. This includes areas excised from and immediately adjacent to PEL 94 and PEL 95 (in SA), where drilling has encountered other unconventional gas accumulations, as well as conventional oil and gas occurrences. For example, the Aldinga-1 oil well, within PPL 210, is in an area excised from PEL 95. Oil shows were recorded in conventional exploration wells Maslins-1 (PEL 94) (Beach Petroleum Limited, 2003) and Seacliff-1 (PEL 95) (Beach Petroleum Limited, 2004). 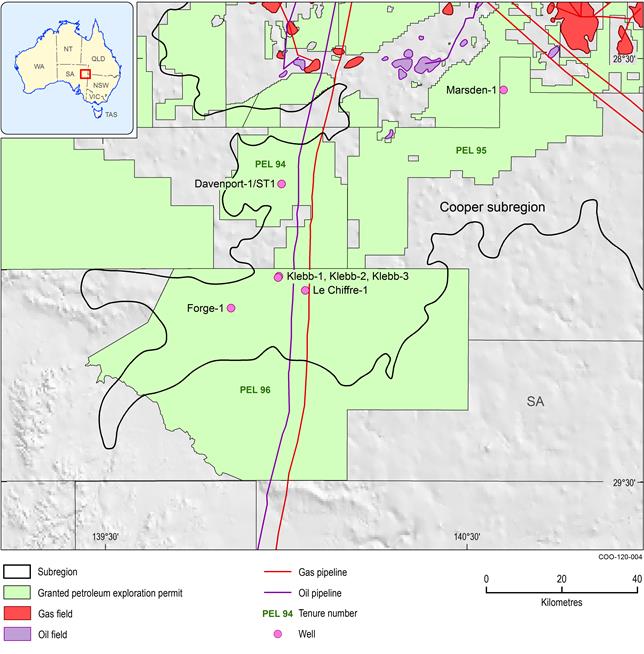 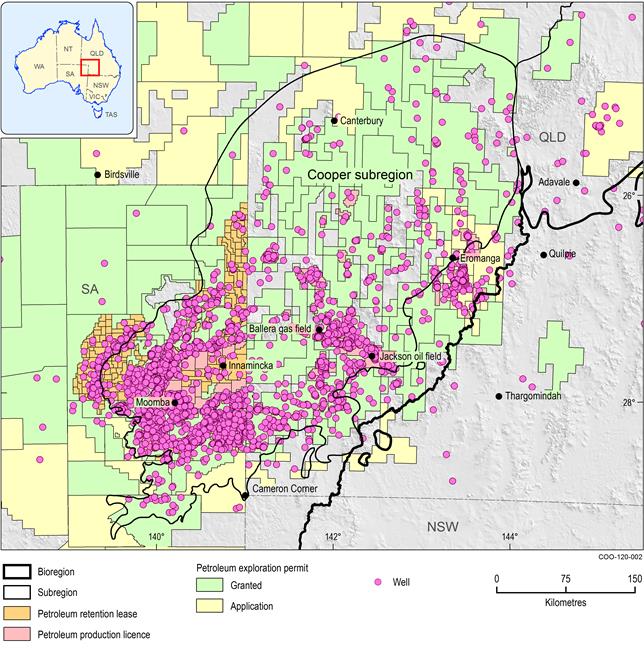 The prospective resource for the southern margin CSG project is 8893 to 23,317 PJ, of which it is estimated that 75% is attributed to CSG (Strike Energy Limited, 2014b). The Pmean (best) estimate of the prospective resource in PEL 96 is reported as 7375 PJ[7] (Strike Energy Limited, 2014a). Production testing is taking place in the Le Chiffre-1, Klebb-1, Klebb-2 and Klebb-3 wells (Figure 9), targeting coal seams in the Patchawarra Formation at depths of up to 2100 m (Hydrogeologic Pty Ltd, 2014).

For production testing in PEL 96, produced water was planned to be directed to storage and evaporation ponds. Smaller lined ponds for fracture stimulation (of 4 ML capacity), and a larger lined pond for produced water. Depending on water quality, earthen ponds in an interdune swale were proposed to provide additional water disposal capacity if required. Planning also allowed for produced water to be reused where possible (JBS&G Australia Pty Ltd and Strike Energy Limited, 2014).