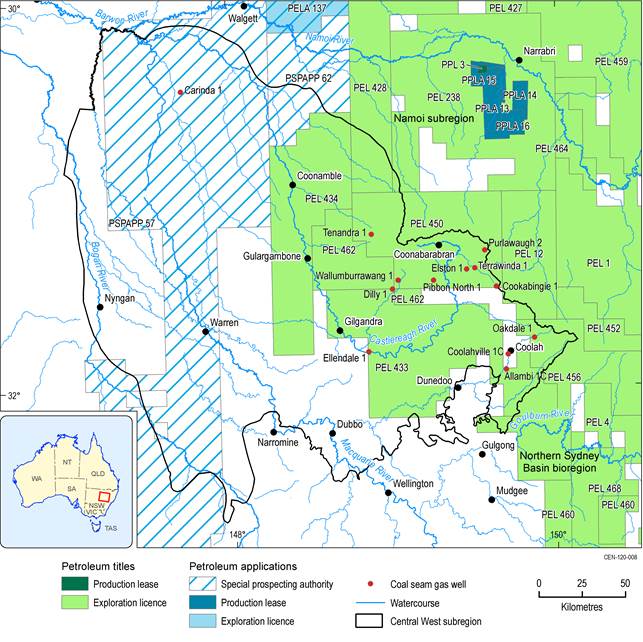 A large part of the subregion is currently covered by Petroleum Special Prospecting Authority Application (PSPAPP) 57 (applicant: NSW Aboriginal Land Council) (see Figure 6). Another PSPAPP partially in the subregion is PSPAPP 62 (applicant Ison Energy Pty Ltd) (see Figure 6). These PSPAPPs are currently (as of August 2014) under consideration by the NSW Government (NSW Department of Trade and Investment, 2014b).

The wells were drilled to determine parameters relevant to CSG operations, such as coal seam depth and thickness, coal quality, rank, gas content, gas composition, sorptive capacity, and in situ permeability. Target coals for CSG in the western Gunnedah Basin in the Central West subregion are the Late Permian coals of the Black Jack Group, with the primary target being the Hoskissons Coal. The Early Permian Maules Creek Formation is either not present in the eastern part of the Central West subregion or only poorly developed. Results from the core wells indicate that the explored area of the Central West subregion is not currently prospective for commercial CSG extraction. The coal seams of the Black Jack Group were found to be either severely undersaturated, with total gas content generally below 1 m3/t, or with maximum gas content of 4 to 5 m3/t but with high levels of CO2 (ESG, 2007a, 2007b, 2010a, 2010b; Santos, 2008a, 2009a, 2009b, 2009c, 2009d; Strike Oil, 2003a, 2003b).

Regional coal seam gas assessment to evaluate the CSG potential in the Gunnedah Basin was undertaken by Santos which included the licence areas PEL 450, PEL 456, and PEL 462 (Santos, 2009c). In 2008 Santos proposed to drill up to 11 new core wells in PEL 450 (Santos, 2008b) of which eight were to be located in the Central West subregion. However, only two of the proposed wells have since been drilled in the subregion (Tenandra 1 and Wallumburrawang 1 - see Figure 6) and the approval for the core well drilling programme has now expired. The results of the Tenandra 1 and Wallumburrawang 1 wells are included in the summary of exploration results presented above. In 2010 Santos gained approval from the NSW Government to conduct the Windurong Seismic Survey to assist in identifying hydrocarbon potential in PEL 450 and PEL 462 (NSW Department of Primary Industries, 2010; Santos, 2010).

A single exploration well has been drilled to assess the CSG potential of the Cretaceous Rolling Downs Group of the southern Surat Basin. The exploration well Carinda 1, in the north-western part of the Central West subregion currently covered by PSPAPP 57 (see Figure 6), intersected a net coal thickness of 6.92 m (including inferior coals) with individual seam thickness of 0.25 to 1.58 m. Coal was encountered to depths of 270 m. The gas content of the coals was not measured (Cydonia Resources, 2011). Gas content measurements require one or several coal cores to be taken from the seam and analysed in a laboratory. This is an additional expense and thus such analysis is not always undertaken during exploration for coal seam gas.

CSG exploration and commercialisation in the Central West subregion needs to be consistent with the CSG regulations and CSG exclusion zones that apply in NSW. These laws prohibit new CSG exploration and development in and around (within a 2 km buffer) existing residential areas (NSW DPI, 2013a, 2013b). See Figure 10 in companion product 1 .1 for exclusion zones in the Central West subregion (Welsh et al., 2014).