Only coals of the northernmost extent of the Western Coalfield of the Sydney Basin are currently being mined in the Central West subregion, as discussed in Sections 1.2.2 to 1.2.4 . The main mined coal horizons in the Western Coalfield are within the Cullen Bullen and the Charbon subgroups of the Illawarra Coal Measures (Bayly, 2012, p. 3), which are of Permian age (see Figure 21 in companion product 1.1 for the Central West subregion (Welsh et al., 2014)). These are overlain by sedimentary formations of varying thickness, age and type including sandstone, shale and alluvium (Ulan Coal, 2014a). Other important coal seams, such as the Moolarben Coal Member, and Middle River Coal Member and Katoomba Coal Member, are within overlying units such as the Farmers Creek Formation.

The Irondale Coal has economic potential in the Wolgan (Figure 3) area, where it is up to 2.4 m thick. It is a high-volatile, vitrain-rich, coking coal, although most of the resources are within the Wollemi National Park (Figure 3) (Yoo et al., 1995, p. 243). According to Yoo et al. (1995, p. 243) the Turill Coal Member is potentially mineable in the Turill-Cassilis area (Figure 3) (northern part of the coalfield) where it is up to 4 m thick at Cassilis. It commonly consists of bright bands and some stone bands and has raw ash of 23 to 45%. The Middle River and Katoomba coal members are economic towards the south of the coalfield, although outside of the Central West subregion (Yoo et al., 1995, p. 243). 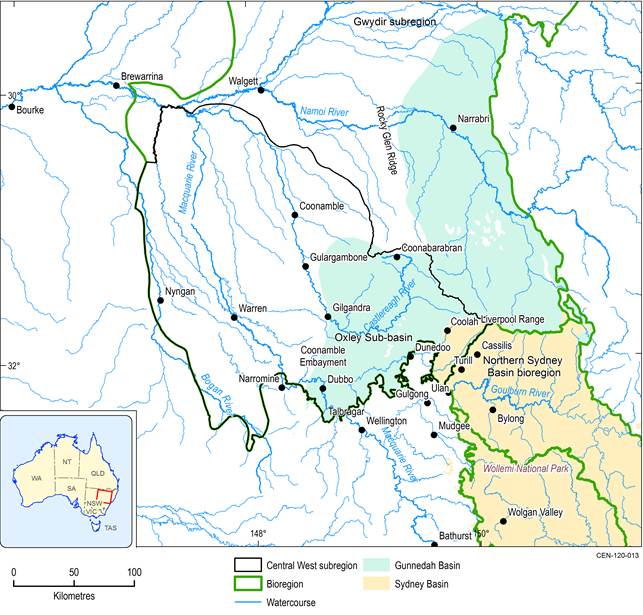 The southernmost areas of the Gunnedah Basin (Figure 3), which fall within the Central West subregion, include the Oxley sub-basin (Figure 3), (O’Neill and Danis, 2013, p. 32), which is possibly synonymous with the Gilgandra sub-basin referred to by Yoo et al. (1995, p. 251), the Gilgandra Trough, referred to in EMM (2012, p. 4) and the western edge of the Mullaley sub-basin (see Figure 17 in companion product 1.1 for the Central West subregion (Welsh et al., 2014)). The Gilgandra Trough is separated from the Western Coalfield by Paleozoic rocks of the Rocky Glen Ridge (Figure 3), and the Dunedoo High to the north (EMM, 2012, p. 4). According to Yoo et al. (1995, p. 251) areas west of the Rocky Glen Ridge are largely unexplored for coal, although Permian rocks have been intersected in exploration drilling.

Apart from the Ulan Seam, the remaining strata of the Cobbora coal deposit has proven challenging to correlate between the Western Coalfield of the Sydney Basin and the Gunnedah Basin (Figure 3) (EMM, 2012, p. 22). The region contains pre-Permian metamorphic basement rocks overlain by coal-bearing strata of Permian, Triassic and Jurassic age (AMM, 2012, p. 22). Over 500 holes have been drilled in the area since the late 1970s and recent exploration has identified that the Cobbora coal deposit is primarily in a sinuous syncline where the regional dip increases on its flanks and where sedimentary rocks lap unconformably onto underlying basement to the west (EMM, 2012, p. 23). The Upper Permian strata contain five potentially mineable coal seams, which in stratigraphic descending order are the Trinkey Formation (2 to 5 m thick), Whaka Coal Member (2 to 14 m thick), Flyblowers Creek Coal (3 to 5 m thick) and two split seams of the Ulan Coal (each 2 to 5 m thick), of which the main mining targets are the two Ulan seams and the Flyblowers Creek Coal, which have consistent distribution with shallow overburden (EMM, 2012, p. 24–25). The seams in the Trinkey Formation and Whaka Coal Member have higher ash content than the other seams (EMM, 2012, p. 23). Coal seams subcrop continuously in a north-west line to the west of Laheys Creek and crop out at several locations (EMM, 2012, p. 25).

Overlying the western Gunnedah Basin in the Central West subregion are sedimentary deposits of the Coonamble Embayment (Figure 3), part of the southern Surat Basin. Little is known about the coal-bearing formations in the Coonamble Embayment, but Radke et al. (2012, p. 66, 122) mentioned that coal seams are rare, with only thin, uneconomic coals present in the Purlawaugh Formation (see Figure 20 in companion product 1.1 for the Central West subregion (Welsh et al., 2014)) and the Drildool beds.