Source data: Department of the Environment (2013b).

The vegetation communities of the Maranoa-Balonne-Condamine subregion are mostly fragmented remnants of forest grading into woodland further west (Figure 9, Figure 11). More than 30% of the region is remnant native vegetation with a substantial area also under regrowth woodlands and grass-based native pastures (QMDC, 2011). The native grasslands that once made up about 3900 km2 around the Darling Downs have been reduced to just over 1% of that region's original grasslands extent, making these sparsely timbered plains one of the most endangered ecosystems in Queensland (QMDC, 2013). 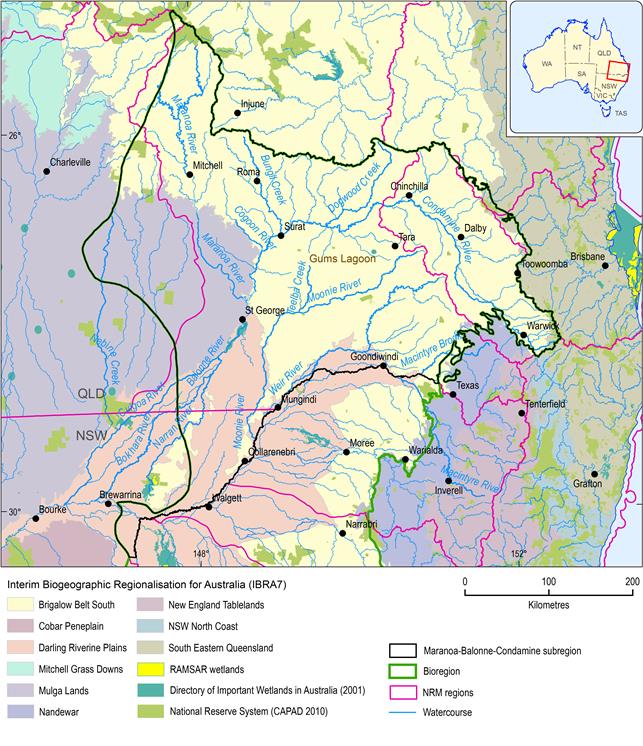 The Brigalow Belt South IBRA bioregion encompasses most of the subregion (Figure 36). It is dominated by stony red earth soils in the upper river basin and deeper clay soils in the lower river basin. The main vegetation type is grassy woodlands of poplar box (Eucalyptus populnea), wilga (Geijera parviflora), white cypress pine (Callitris glaucophylla), budda (Eremophila mitchellii), ironwood (Backhousia myrtifolia) and belah (Casuarina cristata) with mixed grasses (CSIRO, 2008). Extensive areas of the Brigalow Belt South IBRA bioregion (up to 85%) have been cleared for agriculture, and the native remnant vegetation is influenced by floodplains and alluvial fans (Green et al., 2012; Green et al., 2011). The riparian vegetation of the Darling Riverine Plains IBRA bioregion is dominated by river red gum (Eucalyptus camaldulensis), coolibah (Eucalyptus coolibah) and river oak (Casuarina cunninghamiana), with weeping bottlebrush (Callistemon viminalis) a common understorey. Other communities occurring on the higher parts of the floodplains include poplar box woodlands, wilga, brigalow, white cypress and silver leaf ironbark (Border Rivers - Gwydir CMA, 2007). Based on 2009 wetland mapping by the Queensland Government, the total area of wetlands in the Murray–Darling drainage division (which incorporates an area slightly larger than the Maranoa-Balonne-Condamine subregion) is approximately 4000 km2 and includes seasonal, semi-permanent and permanent wetlands and lagoons (DEH, 2014a), three of which are listed nationally (Figure 36) (Environment Australia, 2001). There are numerous protected areas covered by local and state reserve systems and several national parks within the Maranoa-Balonne-Condamine subregion (Figure 36) (Department of the Environment, 2010).

The subregion is an ecologically significant area because it comprises a large range of landforms and ecosystems containing many important species. The historical land uses, particularly clearing and fragmentation of remnant vegetation for grazing, agriculture, mining and urban development, have been major drivers of the current occurrence of the flora and fauna within the subregion (QMDC, 2011). In the Condamine natural resource management region, there has been no detailed and systematic fauna and flora survey. Significant ecological assets of the subregion include:

The ‘Back on Track’ programme has identified the major and minor threats to 36 and 42 species classified as management priorities for the Condamine and Border Rivers Maranoa- Balonne regions respectively (DERM, 2010a; DERM 2010b). Both reports identified the major threats to these species as clearing of vegetation, and inappropriate fire and grazing regimes. Mining was also identified as a threat in the Border Rivers Maranoa-Balonne natural resource management region (DERM, 2010a). These processes also pose significant threats to the Brigalow Belt South ecological communities (Benson et al., 2006). There are over 50 feral species listed for the Maranoa-Balonne-Condamine subregion and these include many pests associated with key threatening processes in the EPBC Act. The ongoing degradation of remnant vegetation and the low level of protection for regional species and ecosystems also pose a significant threat. Some dryland salinity occurs in the Border Rivers alluvial landscape and the interface with the Brigalow Plains to the north is identified as a key hazard area. The extensive irrigation of sodic and saline clays in some areas could increase salt leaching and elevate watertables.