Early Permian deposition within a half-graben structure formed this unit, which consists of shale and siltstone with some sandstone, conglomerate and coal (Green et al., 1997). A correlative of the more widely distributed Reids Dome beds, this unit is known only from the Roma Shelf region. 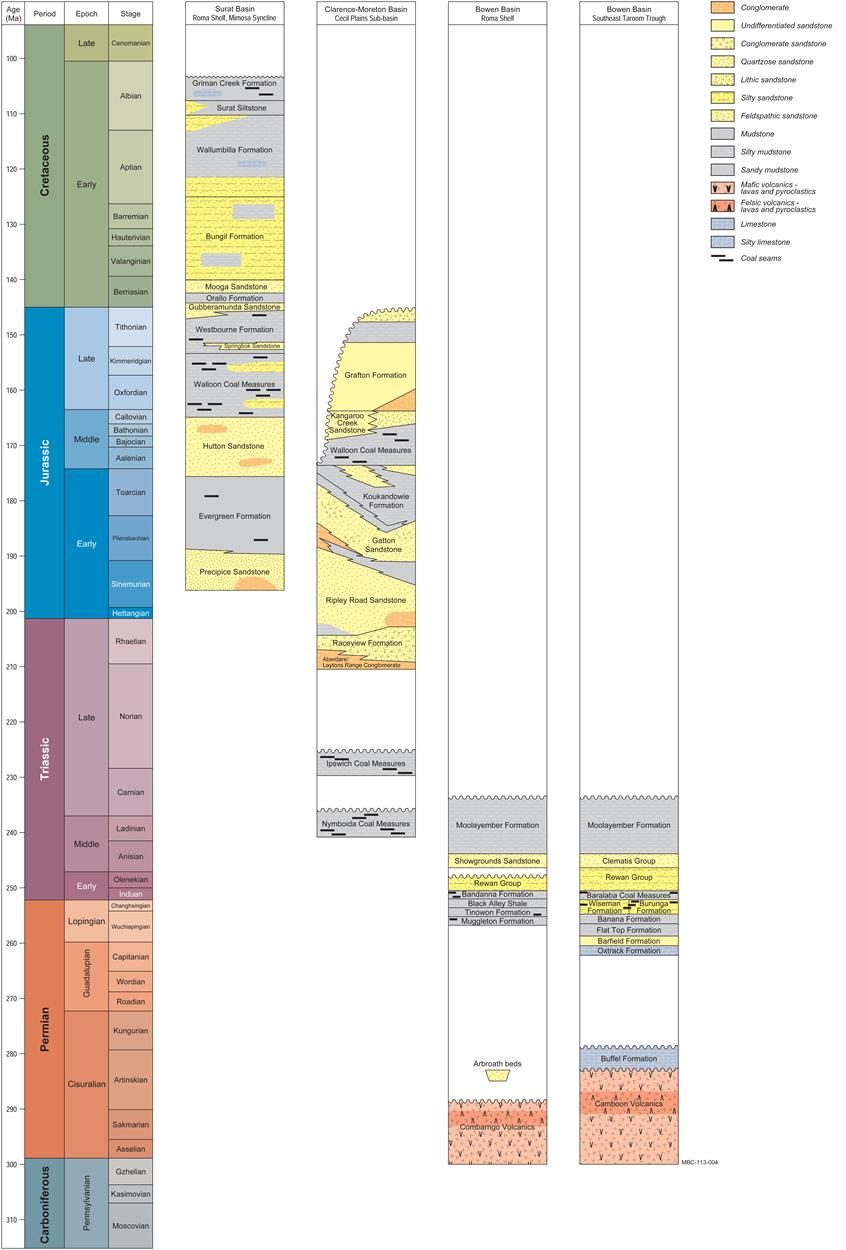 The stratigraphic units listed here are those that could not be definitively excluded from the subregion based on the current literature. Source data: derived from data presented in McKellar (1998), Wells and O’Brien (1994), Totterdell et al. (2009), Doig and Stanmore (2012) and Cook and Draper (2013) This figure has been optimised for printing on A3 paper (297 mm x 420 mm)

The Flat Top Formation formed in a delta fan to shallow marine setting and is composed of siltstone, sandstone, mudstone, conglomerate, coal and tuff (Draper, 2013).

The Banana Formation is an assemblage of mudstone, shale, siltstone and sandstone with minor coal formed during the Late Permian in brackish to marine settings (Green et al., 1997).

Formed as infill sediments within a large lake or inland sea by deltaic input, the Bandanna Formation is composed of sandstone, mudstone, siltstone and rare coal (Green et al., 1997; Draper, 2013). It is part of the Blackwater Group and is one of the main geological units mined for coal in the Bowen Basin.

There are close to 70 stratigraphic units recognised across the entire Surat Basin, most of which belong to one of five main stratigraphic groups (Australian Stratigraphic Units Database, 2013). The spatial distribution and stratigraphic relationships of these units vary within the basin, particularly between the main depositional centre and the other structural elements of the basin. Summaries of the most important coal-bearing stratigraphic units in the Maranoa-Balonne-Condamine subregion (Figure 19) of the Surat Basin are given in this section. The major aquifers are discussed in Section 1.1.4 .

The Evergreen Formation consists of siltstone, shale, sandstone and coal that formed in a fluvial depositional setting on a coastal plain, with possible deltaic influence (Exon, 1976; Cook and Draper, 2013). The formation contains two sub-units, the Boxvale Sandstone Member and the Westgrove Ironstone Member (Exon, 1976; Cook and Draper, 2013). The Boxvale Sandstone Member, consisting of sandstone, siltstone and coal, was deposited during a brief marine transgression (Exon, 1976).

The Walloon Coal Measures are the most significant coal resource in the Surat Basin, and the only unit mined for coal in the basin. A compositionally varied formation that consists of thinly bedded claystone, shale, siltstone, sandstone (lithic and sublithic to feldspathic arenite), coal seams and minor limestone (Exon, 1976). A muddy pebble conglomerate also occurs in several locations (Exon, 1976). The depositional environment is interpreted as fluvial and swampy plains (Exon, 1976). The Walloon Coal Measures can be subdivided into four sub-units: the Durabilla Formation, Taroom Coal Measures, Tangalooma Sandstone and the Juandah Coal Measures (Exon, 1976; Swarbrick, 1973). The Taroom Coal Measures are a mixed sequence of sandstone, siltstone and mudstone, with abundant coal and carbonaceous mudstone interbeds (Scott et al., 2004). A mixed assemblage of sandstone, siltstone, mudstone, claystone, tuff and thin coal to carbonaceous mud seams form the Tangalooma Sandstone (Rohead-O’Brien, 2011). The sandstone is commonly heavily cemented or in-filled with clay (Rohead-O’Brien, 2011). The Juandah Coal Measures are similar in composition and coal volume to the Taroom Coal Measures (Scott et al., 2004).

A Late Jurassic formation of interbedded mudstone, siltstone, sandstone and some coal (Exon, 1976).

The Orallo Formation is composed of thin beds of siltstone and mudstone with some sandstone and minor conglomerate and coal deposited by fluvial channels in the Early Cretaceous to Late Jurassic (Exon, 1976).

A sandstone-dominated unit grading in places to siltstone and mudstone. Minor conglomerate and coal bands occur throughout and are more common in the upper section (Exon, 1976). The lower part of the Griman Creek Formation (Wallangulla Sandstone Member) is interpreted to have formed in a marine environment whereas the upper section (Coocoran Claystone Member) is interpreted as non-marine (Exon, 1976).

The Nymboida Coal Measures formed during the Middle Triassic in lake and marsh depositional environments (Stewart and Adler, 1995; Cadman et al., 1998). This unit is composed of interbedded sandstone, shale, siltstone, claystone, conglomerate, felsic tuff, basalt and coal, forming a unit up to 1000 metres in thickness to the east, thinning to the west (Stewart and Adler, 1995; Cadman et al., 1998). There are also some rhyolitic tuff deposits (Packham and Day, 2008). The Cloughers Creek Formation and Basin Creek Formation are the coal-bearing sub-units of the Nymboida Coal Measures. The Cloughers Creek Formation is a shale-rich formation, carbonaceous in places, that outcrops as lenses in creek beds sporadically throughout the basin (McElroy, 2008). In some places this unit may also contain conglomerate, breccia, siltstone, sandstone and coal (McElroy, 2008). The Basin Creek Formation is a thick unit of sandstone, shale, conglomerate and some coal (McElroy, 2008). The rocks are generally finely laminated, forming a unit up to 1000 metres in thickness (Stewart and Adler, 1995; McElroy, 2008).

An Early Jurassic Marburg Subgroup formation consisting of interbedded sandstones, siltstone, claystone and minor coal (Willis, 1994). Reaching a maximum thickness of 500 m, the Koukandowie Formation can be further divided into three sub-units: the Heifer Creek Sandstone, the Ma Ma Creek Member and the Towallum Basalt (Wells and O’Brien, 1994). The Ma Ma Creek Member is dominantly shale with siltstone interbedding and some sandstone deposited during a lacustrine incursion over a fluvial system; some minor fossilised wood and conglomerate bands have also been observed (Wells and O’Brien, 1994). The Hiefer Creek Sandstone Member is asandstone to conglomeritic sandstone deposited as fluvial bedload and point bar facies (Powell et al., 1993; Ingram and Robinson, 1996).

A massive sandstone member with layers of siltstone and carbonaceous mudstone, it formed in fluvial channel environments (Doig and Stanmore, 2012). It is observed as a coarse to very coarse grained, highly friable sandstone (P Baker (Department of the Environment), 2014, pers. comm.). Currently the Kangaroo Sandstone Member stands as a separate unit above the Walloon Coal Measures, although there is a current review of the stratigraphic nomenclature and this unit may soon form part of a newly proposed unit, the Orara Formation (Wells and O’Brien, 1994; Doig and Stanmore, 2012; Australian Stratigraphic Unit Database, 2013).

A Late Jurassic to Early Cretaceous unit composed of sandstone, siltstone, mudstone and minor coal from a dominantly fluvial environment (Wells and O’Brien, 1994).