Shallow groundwater levels are shown on Figure 23 for the shallow alluvium in the subregion and surrounds. Shallow groundwater flows, with the exception of the Condamine Alluvium, are generally topographically driven with lateral flow directions similar to that of major drainage. In addition, Figure 23 identifies areas of potential inter-formational flow from alluvial aquifers into the GAB formation, where water levels in the alluvium are higher than in the uppermost GAB formations. Conversely, where heads in the uppermost GAB aquifer are higher than the alluvium, there is potential for upward flow, provided the saprolite aquitard on top of the GAB sediments is breached or absent. Based on current knowledge, this condition is only satisfied in the Dirranbandi paleochannel, the Namoi paleochannel and possibly in the deepest (eastern) section of the Condamine River Valley.

High levels of groundwater development and extraction within the Condamine Alluvium and tributaries have resulted in a significant decline in groundwater levels over most of the area (Figure 24), with local pockets of groundwater level rise in the north and central east of the Condamine river basin (Kelly and Merrick, 2007). Hillier (2010) reported groundwater levels recorded in selected bores between the mid 1960s and the early 2000s, all of which show an overall decline. The decline in groundwater levels has resulted in large groundwater depressions, one about 20 km to the east of Cecil Plains and another centred around Macalister, that have significantly altered pre-development flow directions. CSIRO (2008) indicate that recharge to the Condamine Alluvium is via rainfall infiltration throughout the Condamine river basin, flood recharge in the lower areas, lateral flow from adjacent upstream aquifers and upward leakage from the basalts of the Main Range Volcanics Formation. Non-flood streambed leakage from the Condamine River is considered to be the largest source of recharge to the alluvium (Huxley, 1982), with additional contributions from irrigation water via deep drainage. 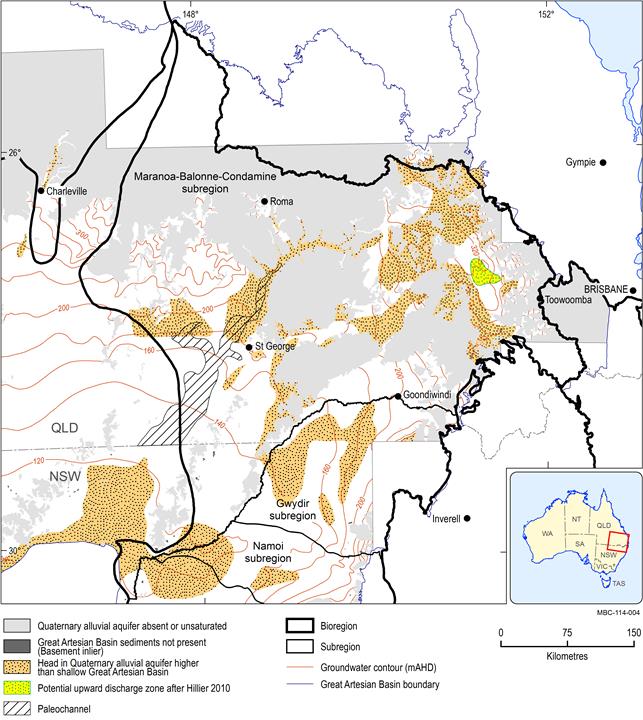 Source data: modified from Kellett and Stewart (2013) with paleochannel outline from Kellett et al. (2006) and potential upward discharge zone from Hillier (2010) Hatched area represents the location of the deep alluvial aquifer within the Dirranbandi paleochannel in Queensland. Potential upward discharge zone is from the Walloon Coal Measures to the Condamine Alluvium. 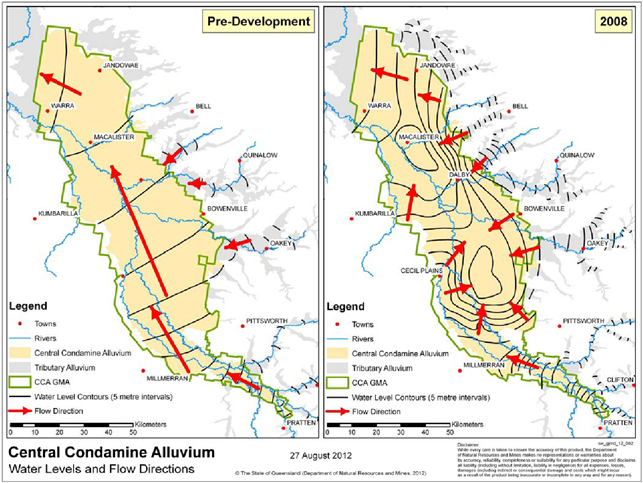 Source: Figure 2 in Department of Natural Resources and Mines (2012)

Useable groundwater is restricted to sediments deposited in a narrow valleys associated with the Dumaresq and Macintyre rivers and the Macintyre Brook. The valley broadens downstream of Keetah Bridge where groundwater generally becomes too saline for use.

CSIRO (2007) indicate that recharge to the Narrabri Formation is mostly from stream losses, with minor contributions from rainfall and excess irrigation, with recharge to the deeper Gunnedah Formation being mostly via cross-formational flow and upward leakage from underlying GAB aquifers. However recharge from the Dumaresq River and Macintyre Brook are not strongly manifested in the groundwater surface (see Figure 23) which generally suggests either no interaction with streams or discharge to them in many areas (although the area near Goondiwindi is an exception where mounding is evident in the groundwater surface which has been attributed to local hydraulic loading by the town weir). There is evidence for some upward leakage from the underlying Surat Basin in this area as outlined in the section on groundwater quality in Section 1.1.4.3 .

Milne-Home et al. (2007), showed that although average water levels in the Border River Alluvium fell by about 2.5 m in the east near Yelarbon from 1990 to 2005, they increased in the west by about 2.5 m south of Goondiwindi, suggesting that the water resource is not highly stressed

Kellett et al. (2006) provide a detailed description of the St George Alluvium including water level and flow direction maps for both the shallow and deep alluvial aquifers between about 75 km north of St George to the Queensland – NSW border. They report that groundwater flow directions in the shallow alluvial aquifer are mainly north to the south-west, and radially outward along the axis of the Balonne River north of Whyenbah. Further, groundwater flow in the deeper alluvial aquifer is from north-east to south-west, parallel to the axis of the Dirranbandi paleochannel. Water levels in the deeper aquifer are lower than in the shallow aquifer.

Groundwater recharge to deep alluvial aquifers is via bed underflow from the Balonne River upstream of Beardmore Dam where the aquifer is unconfined, and leakage from the shallow alluvial aquifer in the groundwater irrigation area (Kellett et al., 2006).

Groundwater level contours for water in the uppermost units of the Surat Basin, presented by Kellett et al. in Smerdon and Ransley (2012), are shown in Figure 25. The water levels mostly represent water in the areas of outcrop of all the GAB aquifers (intake beds) and aquitards along the western slopes of the Great Dividing Range. Water then passes into the Rolling Downs Group (Figure 21) which abuts the intake beds and dips gently basinward to the south-west. The groundwater surface tends to be topographically controlled.

Groundwater recharge mostly occurs along the southern and eastern edge of the GAB via rainfall and streamflow, in an area known as the ‘intake beds’. The intake beds outcrop in the east and north of the Maranoa-Balonne-Condamine subregion.

From the intake beds, groundwater levels are commensurate with general flow to the south and south-west.

The groundwater gradients between the Surat Basin and overlying alluvium indicate potential for upward leakage to the alluvial deposits in parts of the subregion, except for the locations shown on Figure 25 where the groundwater level in the alluvium is higher. 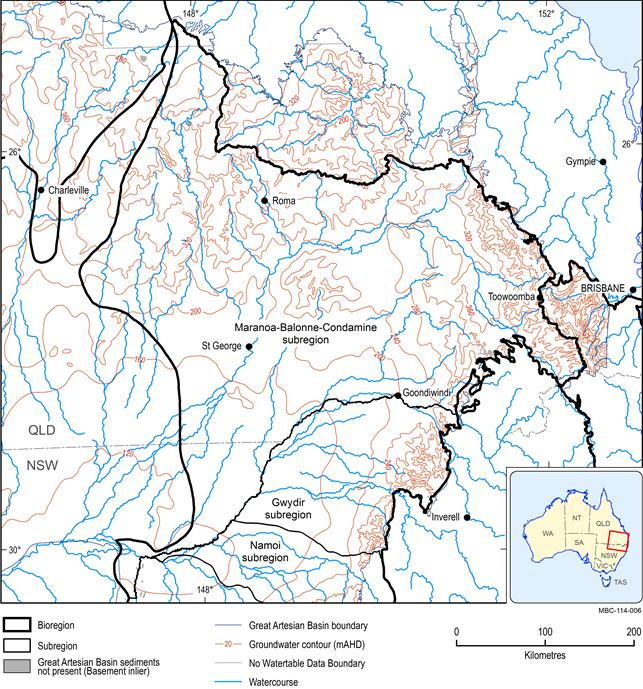 Source data: derived from data presented in Figure 5.19 in Ransley and Smerdon (2012)

As outlined in preceding sections, while the alluvium in the south of the subregion near the Border Rivers is typically separated, in the literature, into the overlying Narrabri Formation and underlying Gunnedah Formation, the contact between them is difficult to determine lithologically in places and some authors question the validity of this separation. Some degree of hydraulic connectivity is often reported between the aquifers of both formations (e.g. Carr and Kelly, 2010), with leakage from the Narrabri Formation commonly cited as a source of recharge to the Gunnedah Formation aquifers.

Kellett and Stewart (2013) indicate that intense weathering of exposed GAB rocks prior to deposition of overlying alluvium resulted in development of a basin-wide saprolite layer. This layer has a low permeability basal portion that is considered to reduce connectivity with overlying systems. Kellett and Stewart (2013) state that in some places the saprolite has been removed by erosion making hydraulic connection possible. Such areas occur beneath paleochannels of which there are reportedly many in the Surat Basin, commonly occurring beneath or next to modern stream channels. Depending on the relative groundwater levels between the alluvium and GAB, there may be upward or downward flow of water in these areas (see Figure 23).

In the Maranoa-Balonne-Condamine subregion, Kellett and Stewart (2013) indicate that areas where downward flow of water from the alluvium to the underlying GAB is highly likely include:

Areas where Kellett and Stewart (2013) indicate that groundwater flow from the GAB to the overlying alluvium in is highly likely in the subregion include:

Within the Surat Basin, little is understood about the extent and influence of geological structures such as faults and fractures and the role they may play as conduits for interconnectivity between formations. The Queensland Office of Groundwater Impact Assessment has identified research into the interconnectivity between the Walloon Coal Measures and adjacent aquifers in the Surat Basin as a priority (QWC, 2012).

A methodology to assess the risks to groundwater associated with coal seam gas development in the Surat Basin and southern Bowen Basin has been developed for the Queensland Department of Natural Resources and Mines (Worley Parsons, 2013). The study considered the risk to aquifer storage in aquifers above and below the Walloon Coal Measures and concluded that there is a relatively high risk for the Lower and Upper Springbok Sandstone, Hutton Sandstone and Gubberamunda Sandstone in locations to the east of Roma, west and southwest of Chinchilla and west of Dalby, within the Surat Basin (Worley Parsons, 2013).

A preliminary desktop assessment of the potential for hydraulic connectivity between the GAB and underlying basins was undertaken as part of the Great Artesian Basin Water Resource Assessment (CSIRO, 2012). Connectivity can occur where aquifers, partial aquifers and leaky aquitards are juxtaposed below and above the base of the GAB (noting that faults may also act as conduits in places through otherwise low permeability formations). Figure 26 shows that hydraulic connectivity between the GAB and underlying formations is likely to be relatively poor across much of the subregion. Local exceptions include the area west of St George; several areas east, north and west of Roma; and a narrow band stretching northward from the area north-west of Moonie. In these locations, the Surat Basin has a heightened potential connectivity with the underlying Bowen Basin strata.

It is emphasised that relative hydraulic heads and thus potential flow directions are not fixed and might change over time in response to stresses such as groundwater extraction (e.g. for irrigation or coal seam gas development). 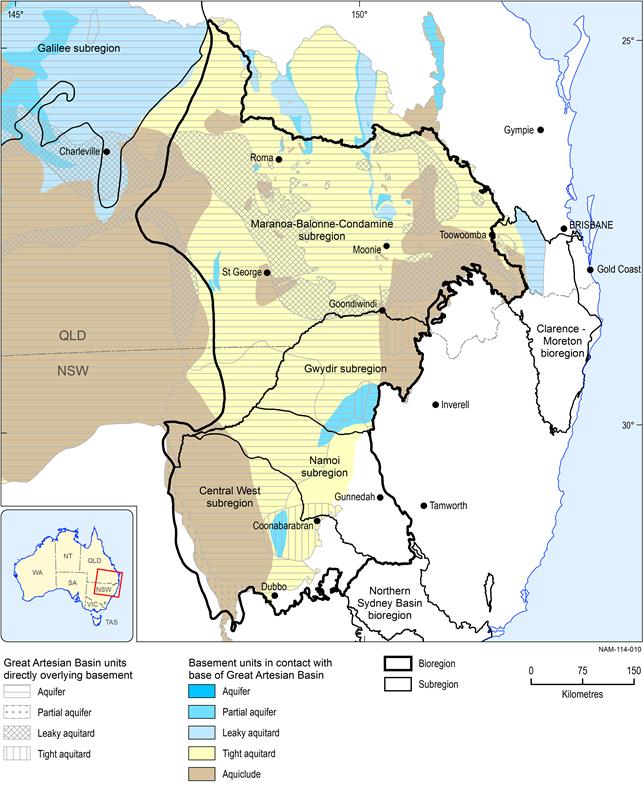 Source data: derived from data presented in Figure 5.7 in CSIRO (2012)