The commercial production of coal or coal seam gas (CSG) relies on the progression of a series of major stages that combine to form the overall development path for the targeted resource. An overview of the Australian coal supply chain, illustrating the progression from resource exploration and mine development through to stages of processing, transport and end-market use is schematically illustrated in Figure 8. The commercial decision to proceed to the major development stage (final investment decision) is based on a variety of geological, environmental, engineering and regulatory factors that interact to determine the economic viability of the resource development (Figure 8). 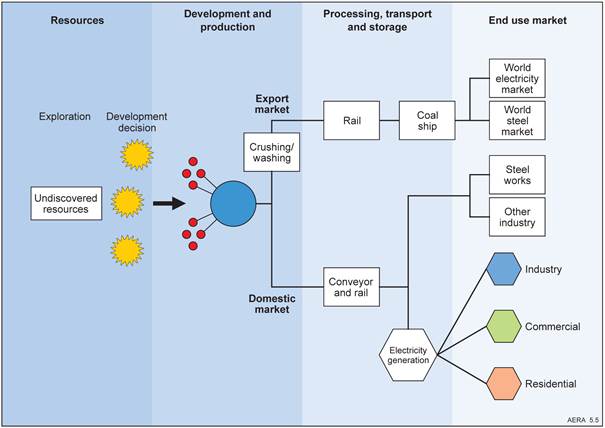 Following the guidelines outlined in the 2013 version of Australia’s Mineral Resource Assessment (Geoscience Australia and BREE, 2013), these major pathway stages are:

In BAs, each bioregion or subregion will have a unique coal resource development pathway. This reflects the variability of location, geology, resource characteristics and economic drivers that play an integral part in shaping the manner in which coal and CSG are commercially developed and extracted. In most regions the time frame from initial exploration work to full-scale development is commonly 7 to 10 years (or even more), although this strongly depends on the status of existing critical infrastructure and transportation networks such as railways and pipelines. Within this time, there are likely to be changes made to the future development plans for the resource, for instance, as new information on the tonnage and grade becomes available. Additionally, resource development plans may also be adjusted in response to external factors that may relate to technological, economic, political or environmental forces. Some of these factors are very difficult to accurately predict based on available information.

The exploration, development and mining of coal and CSG resources in Australia are undertaken by various private and publicly listed companies. These companies aim to generate profits through the commercially viable development and sale of the extracted resources. The Australian and state governments, although not actively engaged in the exploration and mining of such commodities, undertake various geoscience programmes to assist and support the development of national resources, such as the provision of pre-competitive geoscience datasets to encourage exploration in prospective greenfield areas (e.g. refer to information about pre-competitive data acquisition on the Geoscience Australia website). In onshore areas the ownership of coal and CSG resources is vested in state governments and companies pay a royalty fee to the government for the right to extract and sell the resource.

In contrast, greenfield exploration occurs in areas remote from known deposits, but which are considered geologically favourable for similar resource types. Exploration risk is commonly much higher in these areas due to the lack of detailed data and knowledge. Greenfield regions are also unlikely to have supporting infrastructure and transportation networks readily available, making initial development investments significantly more expensive compared to regions that have existing resource developments. A relevant BA example of a greenfield exploration area is the Galilee subregion in the Lake Eyre Basin bioregion.

Following initial discovery, more detailed investigations are required to define the full extent of the resource and determine the spatial distribution and variability in grade (quality). This more advanced stage of investigation is required to evaluate the economic viability (and profitability) of developing a full-scale mining operation. Identifying the tonnage and grade of the resource and establishing its optimal extraction method involves a comprehensive analysis of the resource geology. Significant investment is needed in drilling during this stage to adequately define the extent of the resource (e.g. for coal, it must be reported in accordance with the guidelines in the Joint Ore Reserves Committee (JORC) Code, Appendix A).

Further information on researching and compiling coal and CSG resource data is discussed in Section 3.2.

The decision to proceed with developing an advanced exploration project (‘greenlighting’ the project) with a defined resource will usually be determined during feasibility studies, which assess in detail a range of factors and are used as basis for deciding to proceed to development and mining phases (Geoscience Australia and BREE, 2013). Coal is mined either by open-cut or underground methods. The choice of mining method is an important decision which is assessed during the feasibility stage and is based on a detailed understanding of the local geology and various geotechnical and engineering considerations. Most coal mines in Australia (about 80%) are open-cut mines, reflecting that much of Australia’s identified coal resources occur at relatively shallow subsurface depths (commonly less than 200 m below surface) (Geoscience Australia and ABARE, 2010).

Bulk sample trial open-cut developments may also be undertaken as part of the feasibility assessment, prior to the decision to commission a fully operational development. These activities aim to test the geological and mining characteristics of the coal resource in a small-scale extractive operation.

For CSG developments, pilot production wells are drilled following the initial exploration success. These aim to provide (among other things) further information on gas characteristics, groundwater flow rates and other water-related development issues.

This stage may also include development of associated infrastructure that is required to be built for the development to proceed. This may include ore processing facilities and new transportation systems, as well as roads, ancillary buildings and other infrastructure typical of mining operations.

Modern coal mining techniques are significantly more productive and efficient than those used in the past. Large-scale open-cut mines are developed over many square kilometres and commonly use large draglines to remove overburden, with bucket-wheel excavators used to mine the coal (Geoscience Australia and BREE, 2013).

Many large coal mines can be operational for a significant period of time, with extraction commonly planned to occur over many decades. Thus, in describing the coal resource development pathway, it is important to indicate, where possible, the expected timespan over which operations are projected to occur, so that this information can be incorporated into subsequent modelling stages of BAs. Additional information relevant to describing full-scale operational production includes details of the expected number and extent of mining pits or CSG production wells and if any associated infrastructure or processing facilities are needed. Information on dealing with the by-products of resource extraction, such as mining overburden, must also be taken into account.

In cases where uncertainly is high, this clearly needs to be articulated and the implications for quantitative modelling of water-related impacts needs to be recognised (this is discussed in Section 4.10). Generic development rules, or comparison with similar types of deposits (preferable from the same bioregion or subregion), may need to be formulated in consultation with modelling staff from each Assessment team.

Development plans for mining operations will usually also include plans for closing down the mining activities and rehabilitating the site. Contingency plans for any potential post-development legacy issues may also be addressed within these documents. As the potential impacts of coal and CSG resource developments on water-dependent assets may extend far into the future – often well beyond the time of closure of the actual extraction operations – it is important for any available information on plans for post-mining operations to be documented as part of the information provided in the coal resource development pathway. Although such plans may be changed in the future by the development company (e.g. in response to the impact of unforeseen issues associated with mining, or recognition of new resources), outlining such information in the coal resource development pathway provides an indication of each developer’s intentions after operations cease.