Coal resource developments in the Gloucester subregion occur in both the north-flowing Avon river basin and the south-flowing Karuah river basin. These coal resource developments are detailed in Section 2.3.4 of companion product 2.3 for the Gloucester subregion (Dawes et al., 2018). In terms of surface water, they are not hydrologically contiguous. While the regional groundwater resources in the Gloucester Basin are continuous, the alluvial groundwater systems of the Avon and Karuah river basins are not in contact with each other (see companion product 1.1 for the Gloucester subregion (McVicar et al., 2014)). Water balance reporting points have been selected to quantify the cumulative hydrologic impacts of coal resource developments over the minimum possible area such that they are all hydrologically connected and for which model outputs had been generated (Figure 3). These are node 6 in the northern river basin and node 21 in the southern river basin. Each of these areas is a subdomain of the subregion intended to quantify the ‘maximum’ impact from all hydrologically connected mines, rather than the maximum impact around individual mines or small groupings of just some mines.

In the Avon river basin to the north, node 6 is the first downstream hydrological node that will reflect cumulative hydrological impacts of coal resource developments from expansions at the open-cut Stratford Coal Mine, the proposed Rocky Hill open-cut mine and AGL’s Stage 1 gas field development (Figure 3(b)). The surface water contributing area for this basin is 256.1 km2.

The open-cut Duralie Coal Mine, which is the only mining operation within the Karuah river basin (southern part of subregion), is located in the Mammy Johnsons river basin. Node 21, which is located on this river, is the first node downstream of the mine which will reflect the impacts of mining on both surface water and groundwater in the alluvium (Figure 3(c)). The surface water contributing area to node 21 is 308.6 km2.

Water balances for the baseline coal resource development (baseline) and coal resource development pathway (CRDP) at nodes 6 and 21 have been extracted from the landscape water balance (Australian Water Resources Assessment Landscape model, AWRA-L) and alluvial groundwater models for three 30-year periods (2013 to 2042; 2043 to 2072; and 2073 to 2102), which assume modelled temperature increases of 1.0, 1.5 and 2.0 °C under a future climate projection from the CSIRO‑Mk3.0 global climate model (GCM). These three time periods were generated from the 30-year historical sequence from 1983 to 2012 by modifying the historical sequence to reflect a warming trend. Thus the variability in the historical sequence is preserved, but the effect of droughts and floods does not confound the comparison between time periods. The time to maximum impact will be different for different hydrologic response variables and receptors, which means at the subregion level there is not a single point in time for which a maximum impact water balance can be constructed. The water balance terms reported here represent the annual means for each 30-year period. Changes in the other hydrological response variables (i.e. low flow, high flow and flow regime metrics) generated by the modelling cannot be represented as water balances. The effect of the modelled additional coal resource development on these variables is provided in companion product 2.6.1 for the Gloucester subregion (Zhang et al., 2018). 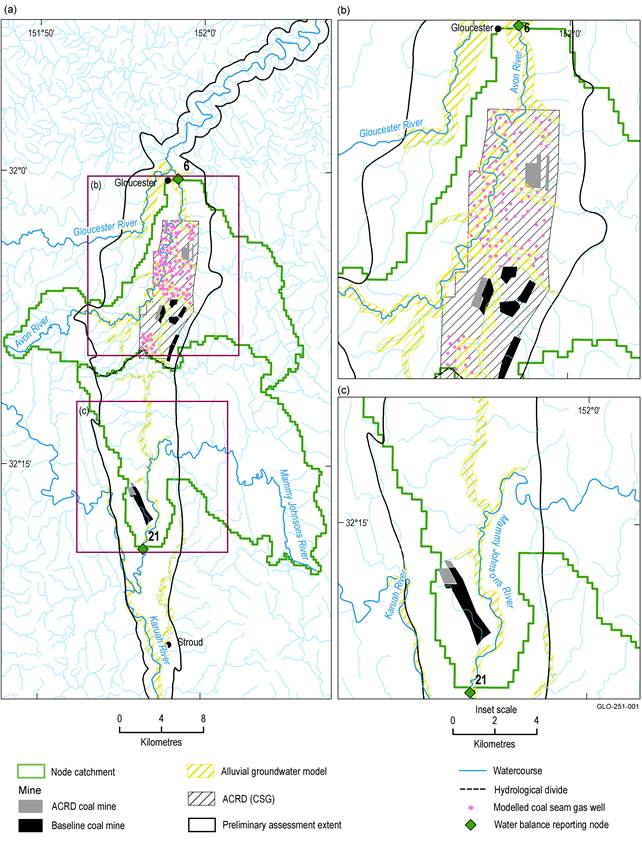 Summary and download
2.5 Water balance assessment for the Gloucester subregion