This product summarises surface water quality information in the Namoi river basin. Surface water quality may be directly impacted by runoff from areas altered by coal or coal seam gas (CSG) development (areas cleared of vegetation, service roads, and site processing facilities), discharge of mine or CSG waters and leaking of hydrocarbons. In addition, induced changes in streamflow as a result of large coal mining or CSG development may impact surface water quality as well. A number of physical and chemical hydrological parameters may be altered by current and potential coal and CSG development, including turbidity, suspended solids, pH, heavy metal concentrations, salinity, and the presence of hydrocarbons.

The NSW Office of Water conducts two types of monitoring: continuous monitoring at river gauging stations and targeted monitoring campaigns for a specific duration and purpose (NSW Office of Water, 2014a). Companion product 1.1 for the Namoi subregion (Welsh et al., 2014) summarised results of the Namoi Water Quality Project (NWQP) (Mawhinney, 2011), undertaken from 2002 to 2007. The NWQP focused on quality parameters related to agriculture (salinity, nutrient and pesticide concentrations, among others). It found that the water quality in the Namoi River and its tributaries was generally acceptable for irrigation and other farming activities, although several parameters (salinity, phosphorus and nitrogen) did not meet default trigger values for the protection of aquatic ecosystems in south-eastern Australia set out in guidelines for water quality by the Australian and New Zealand Environmental and Conservation Council and Agriculture and Resource Management Council of Australia and New Zealand (ANZECC and ARMCANZ, 2000). If trigger values are exceeded for a pollutant, a site-specific investigation is ‘triggered’ following the ANZECC and ARMCANZ guidelines. Future water quality assessments will be conducted using water quality targets set out in the Commonwealth’s Basin Plan 2012.

The remainder of this product includes:

Salinity is measured by the ability of soluble salts to transmit an electric current (electrical conductivity or EC) quantified in microSiemens per centimetre (µS/cm). The default trigger value in the Namoi uplands (from the top of the Great Dividing Range to the junction of the Peel and Namoi rivers immediately below Keepit Dam) is set at 350 µS/cm, whereas for the lowlands (from Gunnedah to the junction with the Barwon River at Walgett) it is set at 300 µS/cm (ANZECC and ARMCANZ, 2000).

Turbidity is a proxy for the amount of total suspended solids in water – the murkier or muddier it appears, the higher the measured turbidity. Turbidity is measured in Nephelometric Turbidity Units (NTU). The ANZECC and ARMCANZ (2000) default trigger value in the lowlands of the Namoi river basin is set at 50 NTU.

Temperature (°C) is monitored for instances of cold water pollution, which is an artificial decrease in the temperature of river water in a natural ecosystem. It occurs when stored cold water is released reducing the natural temperature of the river downstream (NSW Office of Water, 2014b), which may impact river ecosystems. This reduction in temperature mainly occurs when releases are made from large dams bound by walls higher than 15 m (Preece, 2004). Large coal mining operations generally do not have dams with walls higher than 15 m, thus are unlikely to cause cold water pollution, hence these data will not be analysed in the remainder of this product. Temperature is also used to assess surface water and groundwater interactions (e.g. Andersen and Acworth, 2009). Temperature maybe more stable in a gaining stream (i.e. a stream that gains water from local groundwater as it flows downstream), whereas it may fluctuate more with changes in atmospheric temperature in a losing stream (i.e. stream that loses water as it infiltrates from the river bed to the local groundwater, see Loheide and Gorelick, 2006).

Table 13 summarises the gauging stations and dates for which the above-described water quality parameters are available in the NSW Office of Water continuous monitoring network. Figure 15 shows the geographical location and parameters measured at each gauging station. 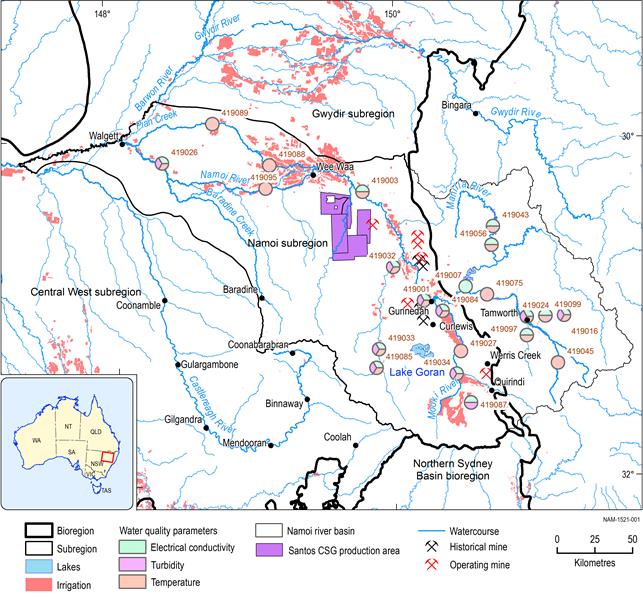 Gauging stations with more than ten years of data for electrical conductivity and temperature are indicated in bold type. Data years are calculated as the number of days with data divided by 365.25.

aEnd dates are not always indicative of end of records, but of cut-off dates for inclusion in published datasets

NA denotes parameter not measured at the station

Figure 16 shows time series of daily mean EC and streamflow (Dataset 6) for the water year (year starting in July and ending in June) 2010–11, which was a year with rainfall higher than the mean (Ganter, 2011). EC values remain higher than the trigger value for the protection of aquatic ecosystems (300 µS/cm) for much of the year. Values drop below the trigger value only after salt in the landscape is mobilised by flows higher than 100 ML/day. The mean daily value for 2010–11 was about 390 µS/cm. 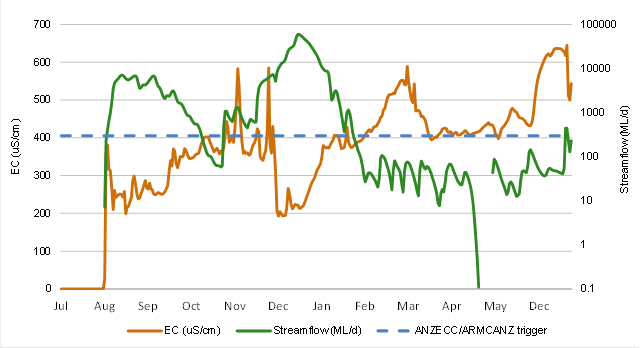 There is a lack of data on the presence of heavy metals, trace elements and hydrocarbons which could result from coal mining and CSG operation and development. Other parameters not routinely monitored include: pH, alkalinity, dissolved oxygen, and major and minor ions.

Summary and download
1.5 Current water accounts and water quality for the Namoi subregion