There are currently no proposals for CSG development in the Gwydir subregion and no reserves have been booked (as of September 2014). However, some initial exploration for CSG has occurred, which has resulted in bookings of a combined recoverable contingent resource of 991 PJ. As per the Society of Petroleum Engineers’ (SPE) Resource Classification System and Definitions, contingent resources are those quantities of petroleum which have been estimated to be potentially recoverable from known accumulations, but are not currently considered to be commercially recoverable (SPE, 2000). Contingent resources may include accumulations for which there is currently no viable market, or where commercial recovery is dependent on the development of new technology, or where evaluation of the accumulation is still at an early stage (SPE, 2000). In the Gwydir subregion the Surat Basin overlies the Gunnedah-Bowen Basin and both basins have been subject to CSG exploration. So far, exploration has targeted the Early Permian Maules Creek Formation, the Late Permian Black Jack Group, the Middle Triassic Moolayember Formation and the Middle Jurassic Walloon Coal Measures, as well as the Early Cretaceous Bungil Formation (ESG, 2009a). For Gunnedah Basin, Bowen Basin, and Surat Basin stratigraphies showing the above mentioned formations see Figure 19 in companion product 1.1 for the Gwydir subregion (Welsh et al., 2014). Findings of the exploration activities are detailed below.

Current petroleum permits fully or partially in the Gwydir subregion are shown in Figure 3 and their details are summarised in Table 2. For the permits that are only partially in the subregion, only exploration within the boundary of the Gwydir subregion is presented here. Types of petroleum permits in the subregion, as shown in Figure 3, are petroleum exploration licences (PELs) (which give holders the exclusive right to prospect for petroleum on the land comprised in the licence (NSW Government, 2014)), petroleum exploration licence applications (PELAs) and petroleum special prospecting authority applications (PSPAPPs). The holder of a special prospecting authority has the exclusive right to conduct speculative geological, geophysical or geochemical surveys or scientific investigations on and in respect of the land comprised in the authority (NSW Government, 2014). To produce petroleum and construct and maintain the necessary infrastructure, a petroleum production lease (PPL) is required, which needs to be obtained via a petroleum production lease application (PPLA) (NSW Government, 2014). 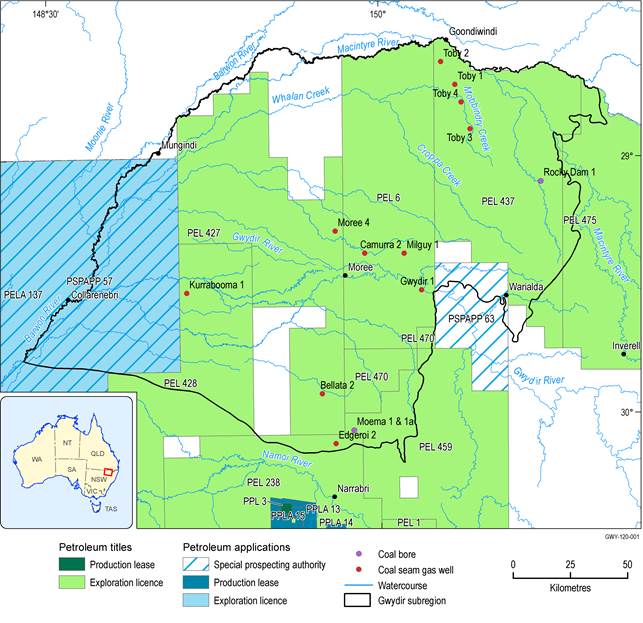 The Walloon Coal Measures of the Surat Basin are viable CSG producers further north in southern Queensland (in the Maranoa-Balonne-Condamine subregion, see product 1.2 for the Maranoa-Balonne-Condamine subregion (Sander et al., 2014)). However, in the Gwydir subregion the formation is significantly thinner (approximately 200 m in thickness compared to 500 m thickness further north) as is the net coal (less than 2 m in the Gwydir subregion compared with more than 30 m in Queensland) (Pangaea, 2010a). Results of an exploration programme (exploration wells Toby 1-4 in Figure 3) carried out by Pangaea PEL 437 Pty Limited (Pangaea) in 2010 indicated very low net coal seam thickness (ranging from 0.6 m to 3.05 m), permeability (not quantified), and gas content (ranging from mean gas content of 0.5 m3/t to 0.8 m3/t on air dried basis) in this area (Pangaea, 2010a, 2010b, 2010c, 2010d). Depth to coal ranged from 460 to 665 m (Pangaea, 2010a, 2010b, 2010c, 2010d). Thus, the Walloon Coal Measures in the Gwydir subregion are currently not considered prospective for commercial CSG production (Pangaea, 2010a, 2010b, 2010c, 2010d).

The lignite to sub-bituminous coals of the Bungil Formation have been a CSG exploration target in the western Gwydir subregion as well as in the Moree region in the subregion centre (see Figure 3). At Moree the coal seams appear reasonably well-developed and are known to be gas-bearing (ESG, 2009a). Five to ten seams are typically present over an approximate 100 m interval with aggregate net thickness of up to approximately 10 m (ESG, 2009a). At exploration well Moree 4 (Petroleum Exploration Licence (PEL) 427, see Figure 3) the Bungil Formation was at a depth of 380 m and the coals had a net thickness of 4.3 m and were undersaturated with a mean gas content of 4.2 m3/t (dry ash free basis, 93% methane (CH4)). Reservoir permeability was indicated as very low in drill stem tests (ESG, 2009a). At the exploration well Kurrabooma 1 (PEL 428, see Figure 3), targeting the same formation at a depth of 320 m, net coal thickness was 4.6 m and the coal was gas undersaturated with a mean gas content of 3.4 m3/t (dry ash free basis, 99% CH4). Log scanner data indicated that the coals are not highly fractured (ESG, 2009b), implying low reservoir permeability. There have been 751 PJ of recoverable contingent resources booked in PEL 427 and 107 PJ in PEL 428 (ESG, 2011). No further development plans are known for these licence areas as of September 2014.

Summary and download
1.2 Resource assessment for the Gwydir subregion

Data register for product 1.2 Resource assessment for the Gwydir subregion