A resource development scenario for the Beetaloo GBA region was used for this impact assessment with peak production of 365 petajoules per year over a 25-year time period, requiring up to 1,150 wells. The development would directly disturb between 8 and 35 km 2 for infrastructure such as access roads and well pads within a total project area of between 430 and 7,700 km2. This scenario would require a total of up to 46 gigalitres of water over the 25-year development period, based on an estimate of 40 megalitres for drilling and hydraulic fracturing per well.

The unconventional gas resources that are understood to occur in the Beetaloo GBA region include shale gas and tight gas. The Beetaloo Sub-basin may also contain liquid hydrocarbons. Unconventional reservoirs have low permeabilities and require innovative technological solutions to move the trapped resources to the surface (refer Section 2.2 in Stage 2 baseline synthesis and gap analysis (Huddlestone-Holmes et al., 2020)).

FIGURE 6 Causal network for the Beetaloo GBA region with links colour coded according to their evaluation of likelihood, consequence and mitigation ( Table 2 )

View a higher resolution copy of this figure 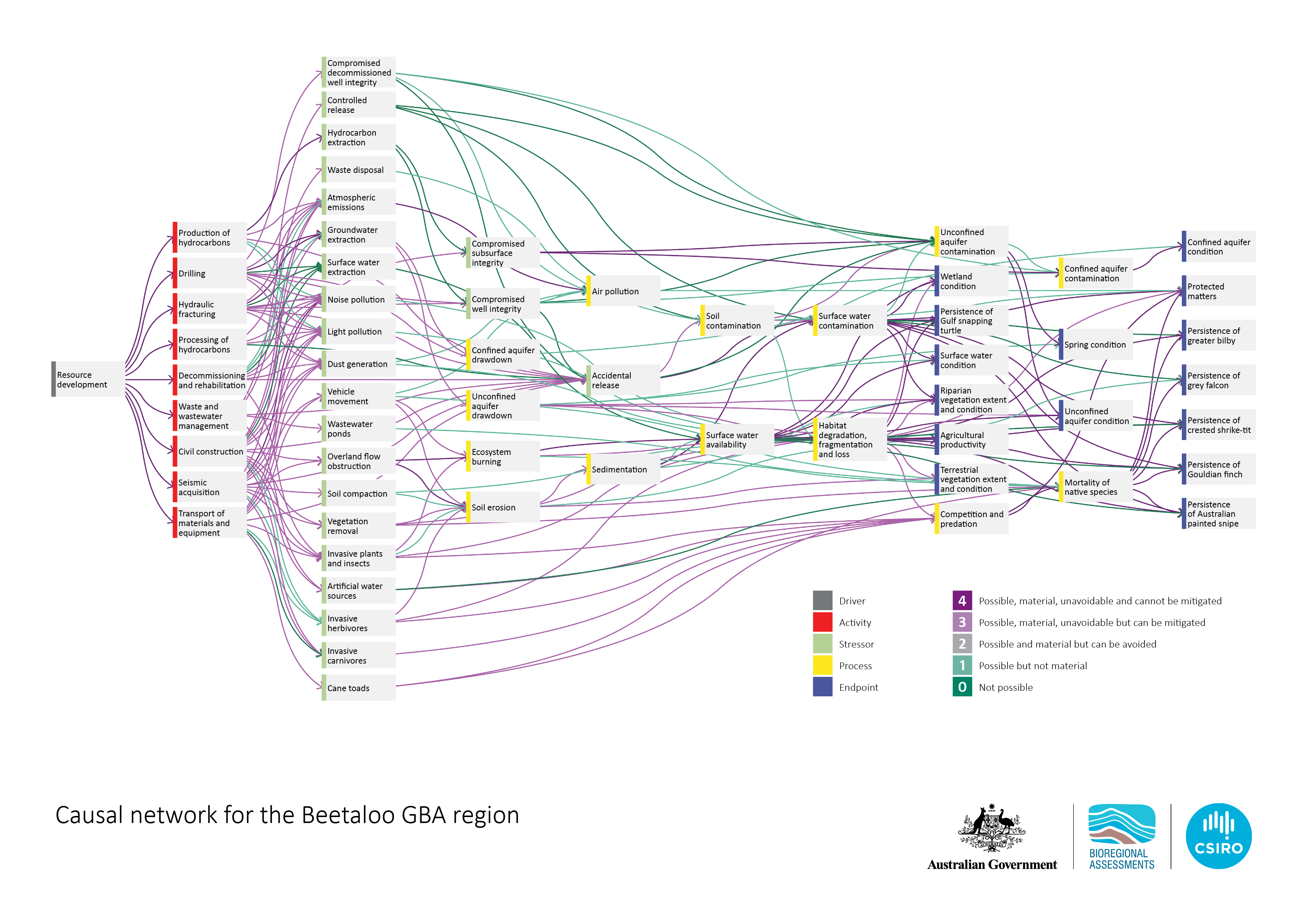 Interact with the GBA Explorer.

This assessment differs from a specific project-based environmental impact assessment where the location, scale and nature of planned activities are well delineated. As there is no certainty of what future development may look like, the resource development scenario is based on the relative prospectivity of unconventional gas plays across the Beetaloo GBA region, as well as potential restrictions prescribed in regulatory frameworks. Relative prospectivity determines the relative likelihood of a resource being present (for example, oil, gas, groundwater) through analyses of geological properties (for example, formation depth and extent, rock properties and reservoir characteristics) ( Figure 2 ).

A resource development scenario based on the GALE scenario used in the Final report of the scientific inquiry into hydraulic fracturing in the Northern Territory(Pepper inquiry) (Pepper et al., 2018) has been adopted. Key characteristics include:

The estimated area disturbed in this scenario by access tracks and well pads is between 8 km 2and 35 km 2. The well pad area extends to the limit of surface disturbance where a well is to be drilled and where drill rigs, pumps, engines, generators, mixers and similar equipment are located, as well as fuel, pipes and chemicals. The spatial extent for the entire unconventional gas resource development scenario, which is a combination of development area (such as roads, well pads and seismic lines) as well as the areas between them, is estimated to be contained within a total area between 430 and 7,700 km 2of the Beetaloo GBA region.

Based on this resource development scenario, a total volume of 21 to 46 gigalitres of water would be required over a 25-year time period (Pan et al., 2021), equivalent to between 0.8 and 1.8 gigalitres per year. Water supply for unconventional gas resource development activities will be governed by a water allocation plan and regulatory conditions overseen by the Northern Territory Government. Potential water sources include groundwater and recycled flowback water from future unconventional resource extraction. As the cost of drilling bores is proportional to the depth, it is assumed that bores will target the shallower unconfined aquifer and if this is not possible, then the deeper confined aquifers. Based on the recommendations of the Pepper inquiry (Pepper et al., 2018) for protection of surface water-dependent wetlands and waterholes, the Northern Territory Government has prohibited the extraction of surface water for petroleum activities (Northern Territory Government, 2019b).

The causal network for the Beetaloo GBA region has been delivered as an interactive online tool, GBA Explorer This allows users to explore the full detail of the causal network

Fact sheetsare available on the Geological and Bioregional Assessment website 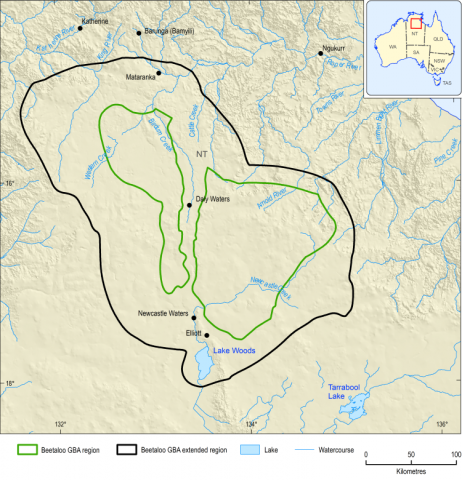