Aquifer: rock or sediment in a formation, group of formations, or part of a formation that is saturated and sufficiently permeable to transmit quantities of water to wells and springs.

Aquitard: a saturated geological unit that is less permeable than an aquifer, and incapable of transmitting useful quantities of water. Aquitards often form a confining layer over an artesian aquifer.

Artesian aquifer: an aquifer that has enough natural pressure to allow water in a bore to rise to the ground surface.

Bioregion (as defined in the bioregional assessment (BA) methodology): the land area that constitutes a geographic location within which is collected and analysed data and information relating to potential impacts of coal seam gas or coal mining developments on receptors identified for key water‑dependent assets.

Bioregional assessments: A bioregional assessment is a scientific analysis of the ecology, hydrology, geology and hydrogeology of a bioregion, with explicit assessment of the potential direct, indirect and cumulative impacts of CSG and coal mining development on water resources. The central purpose of BAs is to analyse the impacts and risks associated with changes to water-dependent assets that arise in response to current and future pathways of CSG and coal mining development.

Bore: a narrow, artificially constructed hole or cavity used to intercept, collect or store water from an aquifer, or to passively observe or collect groundwater information. Also known as a borehole, well or piezometer.

Connectivity: a descriptive measure of the interaction between water bodies (groundwater and/or surface water).

Context: the circumstances that form the setting for an event, statement or idea.

Discharge: water that moves from a groundwater body to the ground surface or surface water body (e.g. a river or lake).

Ecosystem: organisms and the non-living environment, all interacting as a unit.

Extraction: the removal of water for use from waterways or aquifers (including storages) by pumping or gravity channels.

Groundwater: water occurring naturally below ground level (whether in an aquifer or other low permeability material), or water occurring at a place below ground that has been pumped, diverted or released to that place for storage there. This does not include water held in underground tanks, pipes or other works.

Groundwater recharge: replenishment of groundwater by natural infiltration of surface water (precipitation, runoff), or artificially via infiltration lakes or injection.

Hydrogeology: the study of groundwater, including flow in aquifers, groundwater resource evaluation, and the chemistry of interactions between water and rock.

Impact: a change or changed state occurring in a receptor as a result of water-mediated effects of coal seam gas or coal mining development or production.

Permeability: the measure of the ability of a rock, soil or sediment to yield or transmit a fluid. The magnitude of permeability depends largely on the porosity and the interconnectivity of pores and spaces in the ground.

Porosity: the proportion of the volume of rock consisting of pores, usually expressed as a percentage of the total rock or soil mass.

Receptors: discrete, identifiable attributes or entities associated with water-dependent assets that are materially impacted by change in water quality or quantity arising from CSG or coal mining development. Receptors are the primary mechanism for reporting on the direct, indirect and cumulative impacts in a BA.

Runoff: rainfall that does not infiltrate the ground or evaporate to the atmosphere. This water flows down a slope and enters surface water systems.

Saturated zone: the part of the ground in which all the voids in the rocks or soil are filled with water. The watertable is the top of the saturated zone in an unconfined aquifer.

Spring: a naturally occurring discharge of groundwater flowing out of the ground, often forming a small stream or pool of water. Typically, it represents the point at which the watertable intersects ground level.

Surface water: water that flows over land and in watercourses or artificial channels and can be captured, stored and supplemented from dams and reservoirs.

Sustainable yield: the level of water extraction from a particular system that, if exceeded, would compromise the productive base of the water resource and important environmental assets or ecosystem functions.

Unsaturated zone: the zone in soils and rocks occurring above the watertable, where there is some air within the pore spaces.

Water allocation: the specific volume of water allocated to water access entitlements in a given season, defined according to rules established in the relevant water plan.

Water-dependent asset: an entity contained within a bioregion where the characteristics can be ascribed a defined value and which can be clearly linked, either directly or indirectly, to a dependency on groundwater or surface water quantity or quality.

Watertable: the upper surface of a body of groundwater occurring in an unconfined aquifer. At the watertable, pore water pressure equals atmospheric pressure.

Water use: the volume of water diverted from a stream, extracted from groundwater, or transferred to another area for use. It is not representative of 'on-farm' or 'town' use; rather it represents the volume taken from the environment. 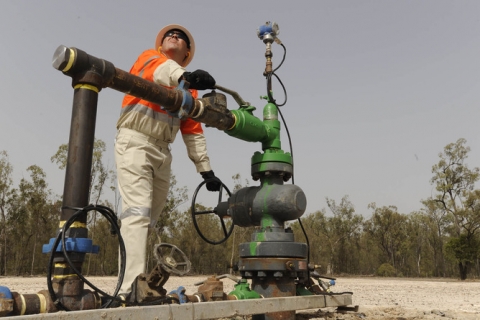