The compilation and classification of assets is conducted within the scope of a bioregional assessment (BA). The Methodology for bioregional assessments of the impact of coal seam gas and coal mining development on water resources (Barrett et al., 2013) specifies a focus on impacts on water resources. While detailed social and economic impact analyses are not within scope of a BA the outputs from the Bioregional Assessments Programme can be used to do so. The assets are compiled and classed accordingly.

Information is compiled about entities (e.g. a wetland or river) having value to the community and that might be affected by water-related impacts of coal seam gas (CSG) and large coal mining development. This information is compiled from a range of sources into the bioregional assessment (BA) asset database. There are three types of assets: (i) ecological, (ii) economic and (iii) sociocultural (see Section 2.2). Briefly, as set out in the BA methodology (p. 39–40), assets within the database should include but not be limited to:

Many ecological and sociocultural assets are obtained from state and national sources (Table 3). All assets and elements are quality controlled for any inconsistencies or deficiencies, including duplicates and data without spatial reference.

aFull descriptions and citations of datasets and collections will be published in the metadata for each subregional asset database.

A key group of ecological and sociocultural assets is provided by natural resource management organisations (NRMs). The Australian Government funded NRMs in each bioregion or subregion to collate lists and spatial information of assets that might be affected by water-related impacts due to coal resource development. This information was recorded in the BA-purpose-built Water Asset Information Tool (WAIT) database for each bioregion or subregion. Key attributes included in the WAIT database and added to the asset database are listed in Table 4.

aPunctuation and typography appear as used in the WAIT

bNot all these attributes were provided in every case

Additional sociocultural assets are sourced from the Australian Heritage Database (Department of the Environment, 2014). Where possible and appropriate, and with the agreement of Indigenous knowledge holders, Indigenous water-related values will be incorporated into BA products either through an updated water-dependent asset register and/or incorporated into later technical products. Meetings are planned with Indigenous knowledge holders to gain an understanding of Indigenous cultural water-dependent assets.

Within each economic asset, every water access entitlement linked to a works approval is an entity. Each entity, which is known for database management purposes as an element, is grouped by type and spatially to create assets (see Appendix Bfor an example from NSW).

Basic landholder rights, including riparian rights, maintain the right of those adjacent to rivers, estuaries, lakes or aquifers underlying the land to extract water for domestic and stock use without a water access licence. Basic landholder rights are defined by the jurisdiction based on the location of the water source and include an estimated volume of use based on the number of landholders with adjacent water sources. All economic assets are categorised as operational for extractive use and therefore do not contain assets that have been classed as abandoned, cancelled or suspended. This potentially over-estimates the number of basic water rights as the jurisdictional database may not have been notified if a basic water right is no longer active.

The compiled assets are classified into groups, subgroups and classes as listed in Table 5. Every element or asset is only assigned one class, and thus subgroup and group. This classification was developed during initial BA applications. It may be feasible to use additional classifications – such as the Australian National Aquatic Ecosystem (ANAE) classification framework (Aquatic Ecosystems Task Group, 2012) – to complement the subgroups and classes. Decisions should be made on a case-by-case basis.

Classification decisions must be made about entities that appear in the asset database more than once either from different sources or as a result of possessing multiple values. For example, Coongie Lakes in the Galilee subregion of the Lake Eyre Basin bioregion is represented in three ways: (i) as a site listed as a wetland of international significance under the Ramsar Convention on Wetlands (Ramsar Secretariat, 2014), (ii) as a site listed in the Directory of Important Wetlands in Australia (DIWA; Environment Australia, 2001) as a wetland of national significance and (iii) as a groundwater-dependent ecosystem. As all three data sources carry different information about the asset, all the information is included in the asset database in the form of three distinct assets. Further, an entity may be an ecological asset because of its ecosystem value and could also be an economic asset if it is used as a water source for irrigation. In this instance the entity would be listed as two different assets in the asset database. Typically, sociocultural assets that are landscape water features are generally included within the ecological asset classes to avoid repetition of assets, though the sociocultural information is retained for use in latter BA components, such as the impact and risk analyses.

Table 5 Classification of assets for a bioregional assessment

For water access licences that are not linked to a works approval, no specific location information is available. Therefore, in these cases, all remaining licences are aggregated to the corresponding water source location (polygon) to ensure they are included as an element or asset in the asset database. This is particularly important to ensure all water use is accounted for, including water that is only delivered through trade.

Groundwater entities (known as elements for database management purposes) that were not classified as a basic water right or a water access right are not considered relevant to the BA and are classed as ‘null’. These include test bores, bores installed for groundwater remediation, exploratory bores, exploratory research, monitoring bores and waste disposal bores. These works are not operational for extractive use. These elements are retained in the asset database for transparency purposes, but are flagged, or ‘turned off’, and will not be considered further in the BA.

Generating the water-dependent asset register requires the development of a comprehensive geo-referenced relational database known throughout this submethodology as the asset database. The asset database holds all assets compiled for the preliminary assessment extent (PAE) of a BA and the asset register lists the subset of assets that meet the water dependency criteria, as defined in Section 4 . As there may be many assets within each asset class for each bioregion or subregion, each asset must have a unique identifier (AID, though sometimes referred to in text as ‘AssetID’ for clarity). A single asset is represented spatially in the asset database by single or multiple spatial features (point, line or polygon). Individual points, lines or polygons are termed elements and must also have a unique identifier (ElementID). An element is a spatially discrete unit and all elements are recorded individually in the ‘ElementList’ table of the asset database – an example of its structure is presented in Figure 4 and the table structure is documented in Appendix A, TableA.1 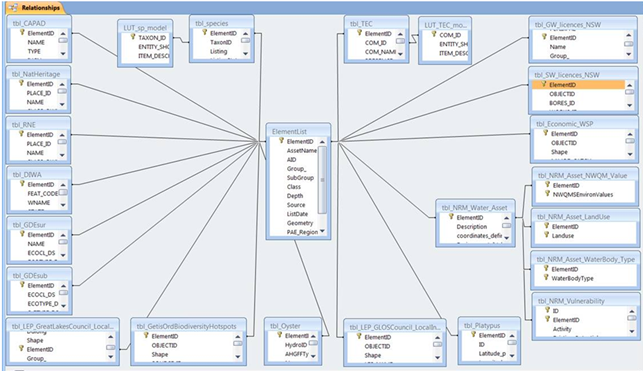 Assets can be made up of one or more elements. Elements are linked to assets in the database via the ‘Element_to_asset’ table (see Appendix A, TableA.2). The asset table is called 'AssetList' and the table structure is documented in Appendix A, TableA.3. An example of the relationship between assets and elements is given in Figure 5, which shows that the asset (Coolibah-Black Box Woodlands of the Darling Riverine Plains and the Brigalow Belt South Bioregions, listed within the EPBC Act as a threatened ecological community) is composed of 3453 elements.

Grouping the elements into assets is the role of both the Assets and Receptors Project team and the Assessment team in consultation with external experts with specialist and local knowledge. This is achieved by naming elements; elements are given names based on a set of rules devised to capture enough information about the element to be descriptive and relevant to the assessment. The rules are tailored to the source data and the assessment and are recorded in the 'decision tables' of the asset database. Examples of rules for naming assets are given in Table 6. For the example shown in Figure 5, aggregation of the 3453 elements for this asset is based on all elements sharing the same ‘Name’ value in the database. The Asset and Receptor Project team first applies the naming rules in the asset database to produce the asset list which is then provided to the Assessment team for further refinement.

Decisions about water dependence and potential for impact by coal resource development are made and recorded for assets (Section 4). Once this is completed, the asset database is used to generate the water dependent asset register. In addition to storing information about assets, the asset database also stores information about receptors (see the pending companion submethodology M03 about assigning receptors and impact variables to registered assets). 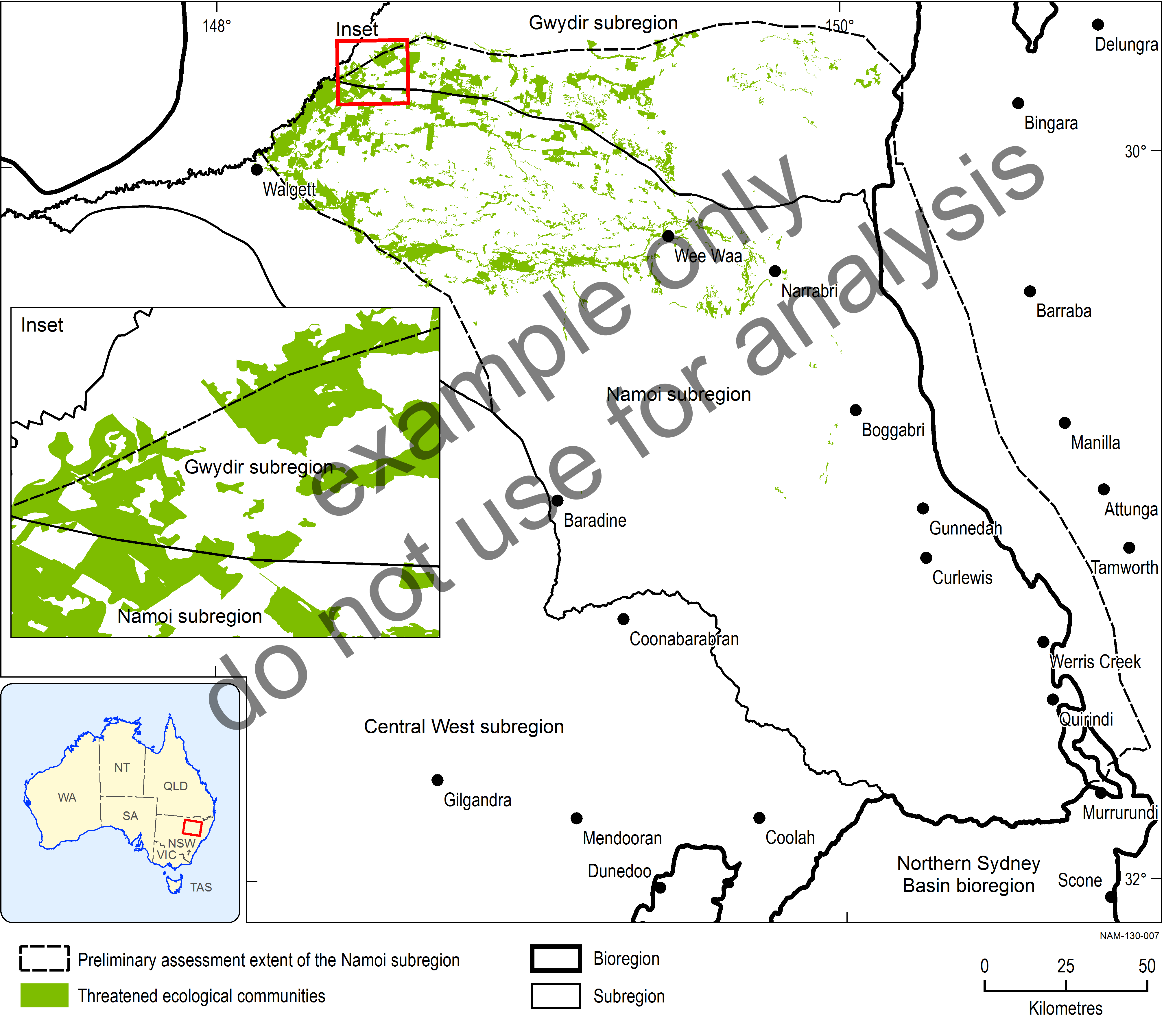 Figure 5 Example showing the relationship between assets and elements

The map shows the distribution of an asset (Coolibah-Black Box Woodlands of the Darling Riverine Plains and the Brigalow Belt South Bioregions, listed under the EPBC Act as a threatened ecological community) in the Namoi and Gwydir subregions of the Northern Inland Catchments bioregion. Note that the asset comprises many thousands of elements (polygons; shaded green). The inset illustrates that the elements of a single asset may be spatially separate.

Example only; do not use for analysis.

aFull descriptions and citations of datasets and collections will be published in the metadata for each subregional asset database.

bSyntax used in the asset database

cPunctuation and typography appear here as generated by the asset database.