A water balance provides a summary of the inflows, outflows and change in storage for a defined area and period of time. Results from the numerical modelling reported in companion product 2.6.1 (Aryal et al., 2018) and companion product 2.6.2 (Janardhanan et al., 2018) for the Namoi subregion are reported as water balances in this product to provide summaries of the effect of coal resource development on key variables of the regional water balance. The CRDP in the Namoi subregion is comprised of open-cut and underground coal mines as well as a coal seam gas (CSG) development.

The water balances are reported for the two potential futures considered in bioregional assessments (BAs):

The difference in results between CRDP and baseline is the change that is primarily reported in a BA. This change is due to additional coal resource development – all coal mines and CSG fields, including expansions of baseline operations, that are expected to begin commercial production after December 2012. For the Namoi subregion the coal resource developments modelled under the baseline and under the CRDP are listed in Table 3.

bGunnedah Precinct and Vickery South Coal Project are in the CRDP but are commentary only.

ET = evapotranspiration, Note: The groundwater balances figure is in cross-section view and the surface water figure is in plan view.

Water balance terms have been extracted from the various models for three 30-year periods (2013 to 2042, 2043 to 2072 and 2073 to 2102). These align with modelled temperature increases of 1.0, 1.5 and 2.0 °C under a future climate projection from the Institute of Atmospheric Physics (IAP) global climate model (GCM) which was the median of 15 models (more details are provided in companion product 2.6.1 for the Namoi subregion (Aryal et al., 2018)). These three time periods were generated from the 30-year historical sequence from 1983 to 2012 by modifying the historical sequence to reflect a warming trend. Thus the variability in the historical sequence is preserved, but the effect of droughts and floods does not confound the comparison between time periods. The water balance terms reported here represent the annual means for each 30-year period.

The groundwater modelling domain for the Namoi subregion encompasses an area greater than the subregion (Figure 4). As described in Janardhanan et al. (2018), the groundwater model represents groundwater in the Namoi subregion comprising the Gunnedah and Surat geological basins along with the alluvium along the major watercourses. A groundwater balance can be generated for the entire Namoi model domain, which comprises an inflow from recharge, outflows from evapotranspiration, mine and non-mine groundwater extractions, exchanges with the surface water system, boundary flows, and change in storage (Figure 3a). Boundary flows occur at the edges of the model domain and reflect inflows to or outflows from the subregion. The reported volumes are for an area of 59,000 km2. Groundwater balances for subdomains of the Namoi subregion are not presented because the model was not configured to do this.

Surface water balances can be reported for subdomains of a subregion because, if surface water – groundwater fluxes are assumed to be generated within the same contributing area as the surface flows, surface water catchments can be treated as relatively closed basins (with respect to inflows) with clearly defined outflow points. Surface water balance terms for the Namoi subdomains are rainfall, river diversions and river outflows, and were obtained from the AWRA landscape model (AWRA-L), AWRA-R and groundwater modelling.

Surface water balance model nodes were selected to quantify the cumulative hydrological changes due to coal resource development over the minimum possible area that they are all hydrologically connected and for which model outputs were generated. Thus these reporting areas summarise the ‘maximum’ impact on streamflow from the main groupings of hydrologically connected mines, rather than the maximum impact around individual mines. 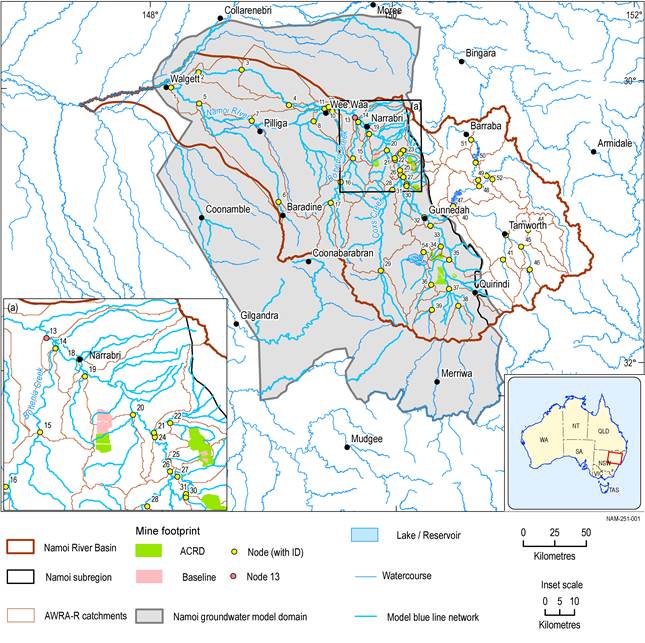 The range, as represented by the 10th and 90th percentile values for each surface water balance term, reflects the top 10% of the original 3000 model simulations, evaluated against annual streamflow observations at Namoi subregion gauges. The gauges chosen for evaluating model performance had at least 25 years of daily data and included unregulated and regulated parts of the river system.

Summary and download
2.5 Water balance assessment for the Namoi subregion