where Re denotes recharge, ET is evapotranspiration, ExL and ExM are licensed and mining extractions, respectively, Qbf is surface water – groundwater flow, B is boundary flow, ΔS is change in storage; and

where P is rainfall and M is mine water discharge, both inputs to the system, and Q is streamflow, Ex is extractions from the river and Res is a residual term, which includes evapotranspiration, leakage and change in storage. Streamflow, Q, includes the surface water – groundwater flux, Qbf, from the groundwater model.

Water balance terms have been extracted from the various models for three 30-year periods (2013 to 2042, 2043 to 2072 and 2073 to 2102), which align with modelled temperature increases of 1.0, 1.5 and 2.0 °C under a future climate projection from the Japanese Meteorological Research Institute global climate model (GCM). These three time periods were generated from the 30-year historical sequence from 1983 to 2012 by modifying the historical sequence to reflect a warming trend. Thus the variability in the historical sequence is preserved, but the effect of droughts and floods does not confound the comparison between time periods. The water balance terms reported here represent the annual means for each 30-year period. These are not directly comparable to the hydrological response variables reported in Herron et al. (2018) and Zhang et al. (2018), which were based on the maximum difference between the CRDP and baseline time-series for each hydrological response variable over the simulation period, but are derived from the same sets of model simulations.

Surface water balances can be reported for subdomains of a subregion because, if surface water – groundwater fluxes are assumed to be generated within the same contributing area as the surface flows, surface water catchments can be treated as relatively closed basins (with respect to inflows) with clearly defined outflow points. Surface water balance terms for the Hunter subdomains are rainfall, river diversions and mine discharges and river outflows, and were obtained from the AWRA landscape model (AWRA-L), AWRA-R and groundwater modelling.

Two areas were defined in the Hunter river basin (Figure 4) – the contributing areas to:

From a surface water perspective, the Macquarie-Tuggerah lakes basin is not hydrologically contiguous with the Hunter river basin, nor are the individual subcatchments hydrologically connected, although some drain to the same coastal lakes. This basin contains three additional coal resource developments: Mandalong and Chain Valley, which were not included in the surface water modelling, and did not have surface water – groundwater fluxes calculated by the groundwater model; and Wallarah 2, which had surface water changes quantified using AWRA-L and groundwater fluxes to the Wyong River generated at two model nodes. Due to the incompleteness of the numerical modelling of the Mandalong and Chain Valley additional coal resource developments, a surface water balance is not presented for this area. 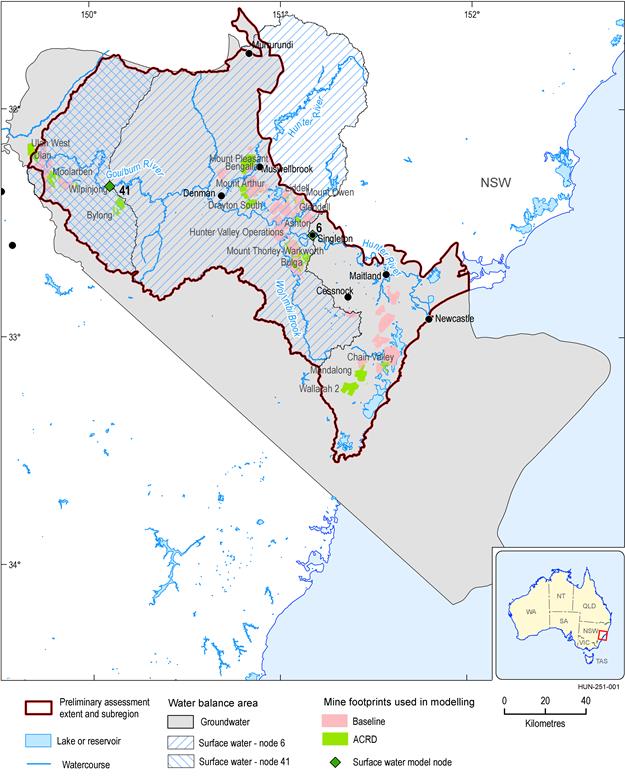 Footprints represent the maximum impacted area at the surface and include both groundwater and surface water footprints.

Footprints of the coal resource development pathway (CRDP) equal the union of footprints for baseline and ACRD.

Summary and download
2.5 Water balance assessment for the Hunter subregion