2.5.1.1 Spatial and temporal extent of the water balance

Water balances for the baseline and CRDP at model node 53 have been extracted from the landscape water balance model (Australian Water Resources Assessment landscape model (AWRA-L)) for three 30-year periods (2013–2042, 2043–2072 and 2073–2102), which align with modelled temperature increases of 1.0, 1.5 and 2.0 °C under a future climate projection from the Geophysical Fluid Dynamics Laboratory (GFDL) model GFDL2.0 of global climate models (GCMs). These three time periods were generated from the 30-year historical sequence from 1983 to 2012 by modifying the historical sequence to reflect a warming trend. Thus the variability in the historical sequence is preserved, but the effect of droughts and floods does not confound the comparison between time periods. The time to maximum change will be different for different hydrological response variables and receptors, which means at the subregion level there is not a single point in time for which a maximum change water balance can be constructed. The water balance terms reported in this product represent the annual averages for each 30-year period. 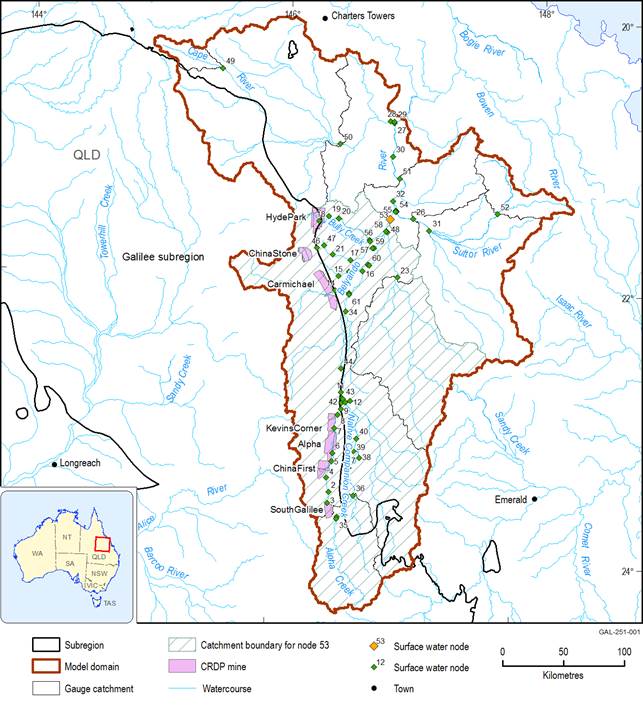 Figure 3 Location and upstream catchment of water balance reporting for node 53, and extent of the seven mines included in the coal resource development pathway (CRDP) for the Galilee subregion

A water balance was produced as an output as part of the Galilee Basin hydrogeological model (GBH), which is a regional numerical groundwater model that encompasses the whole of the Galilee subregion (Turvey et al., 2015). However, this water balance is not suitable for the purposes of the bioregional assessment for the following reasons:

As an alternative, a conceptual groundwater balance was developed in order to compare baseline conditions (pre-mining) with a period 30 years in the future that assumes full development of the seven coal mines in the modelled CRDP. This conceptualised groundwater balance focuses on the portion of the Galilee subregion that falls within the Burdekin river basin (Figure 3). Because of the lack of data, it is not possible to model the water balance for the same three future time periods to the same degree as was undertaken for the surface water balance (Section 2.5.1.1.1).

The approach taken is a modified version of the water cycle report defined for the Water Accounting Stocktake project undertaken by the inter-jurisdictional National Water Initiative Committee (SKM, 2006). While this is a relatively simple modelling approach that does not produce stochastic outputs for uncertainty analysis, it is considered fit for purpose for this BA as it can flag if there is potential for groundwater pumping by coal mining operations to cause changes to a major component of the groundwater balance, as well as identify possible data gaps.

The conceptual groundwater balance consists of several components. These are:

Baseflow can be derived from a number of processes (for further detail see Section 2.1.5.2 in companion product 2.1-2.2 for the Galilee subregion (Evans et al., 2018a)). However, for the purposes of the conceptual water balance, baseflow is assumed to be derived through fully saturated groundwater discharge from an aquifer to surface drainage. This may provide a theoretical upper estimate of the potential fluxes of groundwater that may occur between river reach and an underlying aquifer.

The conceptual groundwater balance assumes that prior to the drilling of groundwater bores, the groundwater system was in a steady-state condition with inputs equal to outputs. Thus prior to development of coal and CSG resources in the region:

Because the conceptual groundwater balance is based on published estimates of water balance components, it is not possible to report using the three 30-year time periods as used in the surface water balance (Section 2.5.1.1.1) and other bioregional assessments. The groundwater balance was undertaken to compare the results under the baseline (a future where no coal resource developments occur) to results under the modelled CRDP (a future where additional coal resource developments occur). Section 2.3.4 of companion product 2.3 (Evans et al., 2018b) provides more detail on the modelled CRDP for the Galilee subregion.

Full references for each item in the groundwater balance along with estimates of data currency and reliability are available in Bioregional Assessment Programme (Dataset 1).

Summary and download
2.5 Water balance assessment for the Galilee subregion