The following were considered in developing the PAE for the Maranoa-Balonne-Condamine subregion:

The Maranoa-Balonne-Condamine PAE (Figure 3) is the extent of groundwater and surface water systems that may potentially be impacted by coal resource developments in the subregion. 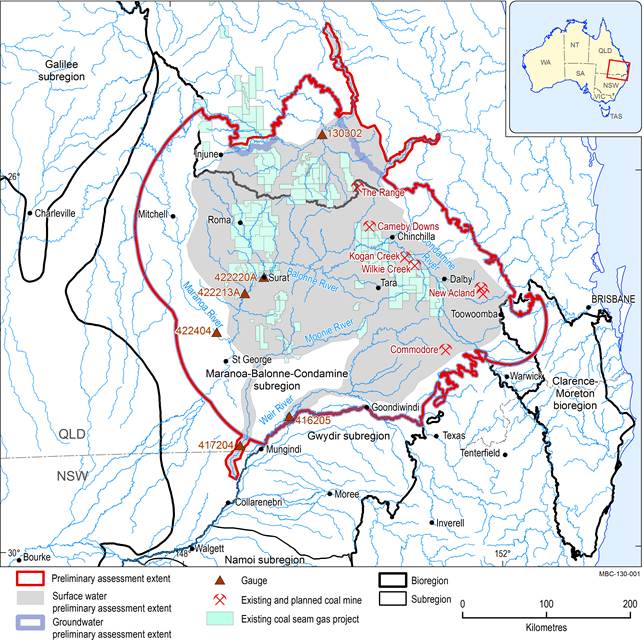 Data: Department of Natural Resources and Mines (Dataset 29 and Dataset 30)

Predicted water level impacts, reported in the Underground Water Impact Report (UWIR) for the Surat Cumulative Management Area (Queensland Water Commission, 2012), were considered in developing the groundwater PAE. The predicted water level impacts were calculated using a regional groundwater flow model (MODFLOW 2005, Queensland Water Commission, 2012) designed to predict the impacts of groundwater extraction by the petroleum and gas extraction industries within the Queensland portion of the Surat and Bowen basins.

The 95th percentile maximum groundwater drawdown areas for the Walloon Coal Measures, Hutton Sandstone, Precipice Sandstone and Clematis Sandstone hydrogeological units (Queensland Water Commission, 2012) were used to determine the lateral extent of the 1 m drawdown boundary for each geological unit (refer to Figure 21 in companion product 1.1 for the Maranoa-Balonne-Condamine subregion (Welsh et al., 2014)). To ensure all potentially affected assets were included within the PAE, a 100 km buffer was applied to the 1 m drawdown boundary for each hydrogeological unit. The resulting 100 km buffer boundaries were combined and the most laterally extensive boundaries were incorporated into the PAE boundary. The eastern PAE boundary, where it extends into the Clarence-Moreton Basin, was a combination of a 50 km buffer of the 1 m drawdown extent and the outer boundary of the Marburg Sandstone (a lateral equivalent of the Hutton Sandstone).

It is unlikely that the units underlying the Hutton Sandstone will be impacted by extraction of groundwater from within the Maranoa-Balonne-Condamine subregion. For example, north of Roma, the modelled impact to water levels in both the Precipice and Clematis sandstones is a result of CSG extraction from the Bandanna Formation of the Bowen Basin in the Fairview and Spring Gully gas fields, which are located outside the subregion. Therefore the 1 m drawdown extents for the Precipice and Clematis sandstones north of Roma were not considered in developing the PAE.

The PAE allows full assessment of impacts to the Hutton Sandstone and shallower aquifers as well as those areas of the Clematis and Precipice sandstones that may be impacted by CSG-related groundwater extraction from within the Maranoa-Balonne-Condamine subregion. Furthermore, in the east, the PAE encompasses current operating (Commodore, New Acland, Kogan Creek and Cameby Downs) and proposed (The Range) coal mines.

The CSG and large coal mining developments in the Maranoa-Balonne-Condamine subregion are mostly at upstream and headwater areas of the Condamine-Balonne, Maranoa, Moonie and Weir rivers. To examine their flow volume and seasonal patterns, data from the following stream gauging stations were analysed: Balonne River at Surat (422220A) and at Weribone (422213A); Maranoa River at Cashmere (422404); Moonie River at Fenton (417204), Weir River at Jericho (416205) and Dawson River at Taroom (130302) (Figure 3). These stations are at the most downstream location in the rivers within the Maranoa-Balonne-Condamine subregion. The following summarises their flow characteristics:

Most rivers in the Maranoa-Balonne-Condamine subregion are ephemeral, with temporary or intermittent surface water flow that varies between seasons and years. Apart from a few wet months (the wet season in this region is October to April), river flow is zero or close to zero, except for the Dawson River. Therefore any potential discharge from developments to these rivers could have a significant impact on the riparian environment. Since there will be little or no natural streamflow for most days of the year, the quality of released water could potentially be changed by evapoconcentration and mixing with remnant water in the river bed or remnant pools. Current regulations on co-produced water from CSG activities in Queensland aim to strategically manage water and saline waste so that it is used beneficially for new or existing water users, water-dependent industries and/or the environment and firstly avoids, and then minimises and mitigates impacts on environmental values (EHP, 2012).

Dilution, evaporation, seepage, chemical transformation or a combination of these make it difficult to predict how far any effluent water could travel in natural watercourses. Influential factors include the quality and quantity of the release or spillage, existing flow in the receiving waters and the prevailing weather conditions.

A buffer of between 5 and 7 km based on the extent of riparian vegetation from the Dawson, Moonie and Weir rivers was used in defining the spatial extent of possible surface water related impacts.

Summary and download
1.3 Water-dependent asset register for the Maranoa-Balonne-Condamine subregion