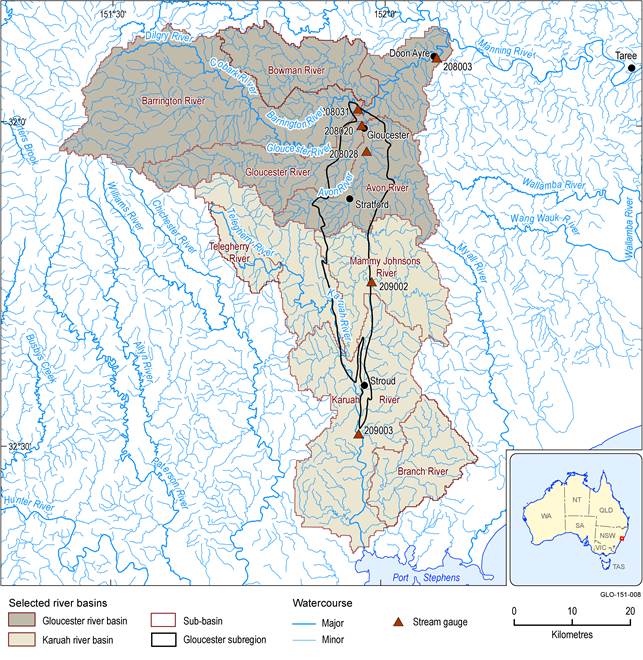 The surface water resources in the Gloucester river basin are not regulated rivers in the sense that they do not host major dams or weirs, but are affected by irrigation diversion (Reinfelds et al., 2015). There are about 329 ha and 282 ha, respectively, of irrigation occurring upstream of the streamflow gauging sites on the Barrington River at Relfs Road (gauge ID: 208031) and on the Gloucester River downstream from Gloucester (gauge ID: 208003). The Avon and Bowman rivers are also strongly affected by irrigation extraction with about 190 ha and 104 ha of irrigated land, respectively (Reinfelds et al., 2015).

Under NSW government water sharing plans (DPI, 2009), there are 84 surface water access licences amounting to 6806 ML/year of water for the stream network within the northern part of Gloucester river basin (Table 4). This is about 1.64% mean annual flow produced by the Gloucester river basin (gauge ID: 208003). It is noted that these are licenses for extraction but do not necessarily represent the actual diversions for water extraction.

The surface water resources in the Karuah river basin are not subject to regulation by major dams or weirs. The Karuah River produces a mean annual flow of 270 GL/year at Booral (gauge ID: 209003) (Table 5).

For the Karuah River flowing through the southern part of the subregion, there are 25 nominal entitlements granted as ‘water access right’ amounting to 951 ML/year of water for the stream network (Table 6). This is about 6.5% of the mean annual flow produced by the Karuah river basin (gauge ID: 290003). It is noted that these are entitlements for extraction but may not necessarily represent the actual diversions.

There is a lack of long-term streamflow observation at some gauges, leading to a high degree of uncertainty in understanding variability of annual streamflow. There is little information on how much surface water is actually used by the nominal entitlements.

Summary and download
1.5 Current water accounts and water quality for the Gloucester subregion