The PAE is the geographic area associated with a bioregion or subregion in which potential water-related impacts of coal resource development on assets are assessed. It is the first step to identifying and analysing potentially impacted assets. The following details the rationale for the boundaries of the PAE, which is shown in Figure 3.

Northern boundary: The project’s Victorian partners have identified in the system conceptualisation for the numerical model developed by the Victorian Water Science Studies (Department of Economic Development Jobs Transport and Resources, 2014) that the prevailing control on development impacts to water resources along the northern boundary is geohydrologically constrained (GHD, 2012). Surface geology is used to identify the northern bounds of the surficial aquifers of the Haunted Hills Gravel and the Sale Group (for further detail see companion product 1.1 for the Gippsland Basin bioregion, Section 1.1.4). The northern bounds of these units delineate the transition from local scale groundwater flow systems (to the north of this boundary) and intermediate to regional scale flow systems (south of this boundary). It is anticipated the propagation of water resource impacts in local flow groundwater systems are unlikely to be as extensive as intermediate or regional flow systems (Coram et al., 2000). Regardless, the PAE introduces a 10 km buffer to the north of this geohydrologic transition to encompass any uncertainties associated with demarking a boundary according to mapped surface geology. The 10 km buffer will increase our confidence the project has captured all water-dependent assets or receptors that could be directly or indirectly associated with current or potential large coal mining and CSG resource developments.

Western boundary: The imposed Victorian Government moratorium on onshore gas exploration has resulted in little resource exploration interest further west. The western boundary is a surface water and groundwater divide. Surface water further to the west drains towards Western Port. Based on the scientific rationale and conceptualisation, the PAE boundary adheres to the conceptual understanding of groundwater boundaries in the Gippsland Basin.

Southern/coastal boundary: This southern boundary follows the coastline as the BAs are investigating onshore impacts of CSG and large coal mining developments. The PAE explicitly includes the Gippsland Lakes and is clipped to the national 1:250,000 national topography coastline. However, the Water Sciences Studies (Department of Economic Development Jobs Transport and Resources, 2014) numerical groundwater model used by this BA extends offshore to account for petroleum industry abstractions offshore.

Although the Gippsland Basin bioregion BA is not explicitly looking at offshore impacts, the project will comment groundwater flow along the coastal margin where applicable in later products. 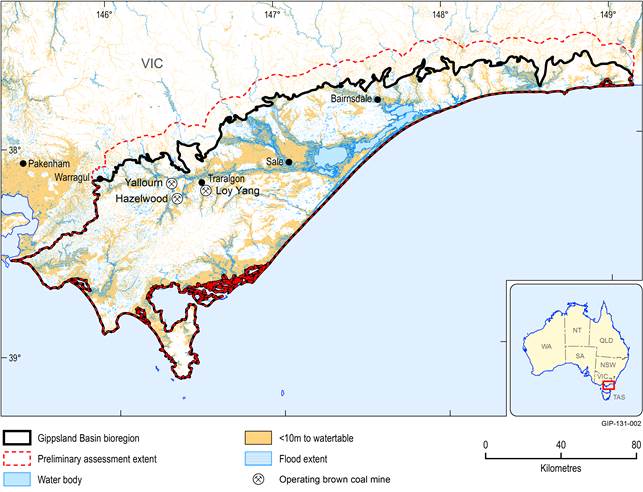